Hey Blog Buddies,
Another International Hermit & Stitch Weekend (IHSW) has come and gone.  The project I was working on all last week continued on into Saturday before I felt I had come to a stopping place.  Here is my "before" pic: 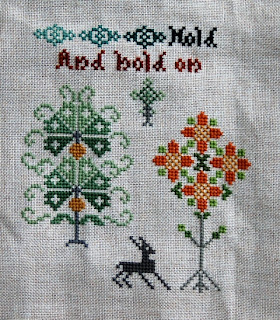 My April start on
Rosewood Manor's A Tree by Itself.
Here's where it's at now: 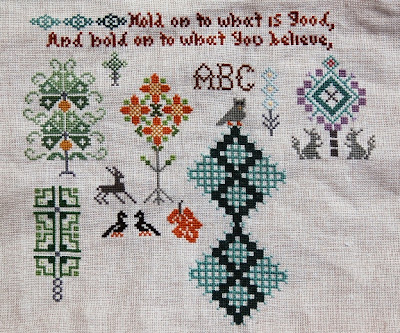 No, your eyes aren't deceiving you.
That first "Hold" was black, and I changed it to "German Chocolate"!
If I can squeeze this piece into my rotation every month,
I should be able to make some real progress!
The color of the linen looks different in every photograph--
it's actually Lamb's Wool!
After I put Tree aside, I switched gears
and got out a small seasonal Lizzie-Kate chart... 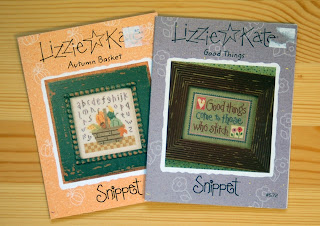 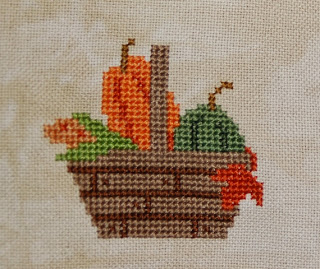 This is how far I had gotten by Sunday evening.
I'm using a very lovely overdyed
32-count Lugana--the color is Legacy.
Looks much nicer in person.
I'm going to keep working on this one until it's finished.
That's it from here.
To see my fellow hermitters' progress,
go to Random Ramblings.
And a big thank you to Joyce
for hosting this fun SAL every month!
Hope you all had a wonderful, stitchy weekend.
Thanks for visiting!
Posted by Southpaw Stitcher at 11:05 PM 16 comments:

Email ThisBlogThis!Share to TwitterShare to FacebookShare to Pinterest
Labels: A Tree by Itself, IHSW, Lizzie Kate, Rosewood Manor

Hey Blog Buddies,
Hope you all are having a good weekend!  Our weather turned much cooler and autumn is in the air here.  What a great segue for my pumpkin piece, huh? 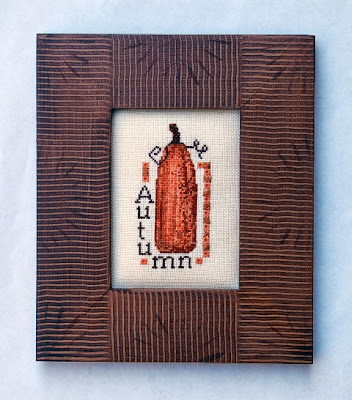 Here it is all finished and framed.
Lofty Pumpkin
Designer:  Twisted Threads
Fabric: 25-count ecru Lugana
Threads:  Recommended DMC, one over one
I told you I had the most perfect frame, didn't I?
It's by Homespun Elegance,
probably for one of her specific designs,
but it goes with piece this beautifully, too.
On the Hallowe'en front, I stitched the September ornament,
so now I'm all caught up with my SAL. 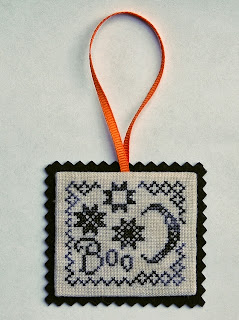 This is another design from
BBD's Trix or Treat booklet.
The theme for this month's ornament is
Hallowe'en words.
To celebrate this finish, I put up my Hallowe'en tree.
It looks quite festive with nine new ornaments!
The fabric is (again) 40-count Heritage linen,
and I used Gloriana silk in the color Charcoal.
This was cute and very quick to stitch!
Lastly, here is a little something that
I started a while ago and haven't showed yet: 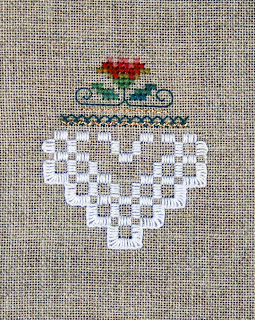 This will eventually be one of
Victoria Sampler's Tudor Tassel ornaments.
The pattern is from
the 2010 JCS Christmas Ornament issue.
I've had this kitted up for almost 3 years now.
I think the finishing is what's been
making me procrastinate on this project.
But I'm glad it's at least started,
because now I'm much more likely to pick it up soon-ish!
(I refuse to define "soon-ish"!)
Right now I am working on my long-neglected BAP
Rosewood Manor's A Tree by Itself.
I started it in April and haven't picked it up since!
Stay tuned for a update on that in a few days.
That's it from here.
Thanks, as always, for visiting!
Posted by Southpaw Stitcher at 6:06 PM 11 comments:

First, thanks so much for all the comments you've been leaving--I love you guys!

This past weekend turned into a finishing frenzy for me--very uncharacteristic.  There's quite a bit to catch up on, so let's go right to the photos: 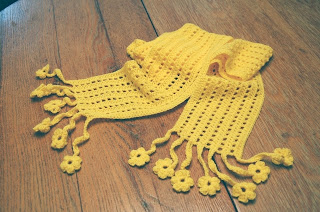 This crocheted daisy scarf (not part of this weekend's frenzy)
was finished right around the beginning of this month.
It's another donation for the Boutique.
Next up, my July Hallowe'en ornament
(I am in the 2013 Halloween Ornament SAL): 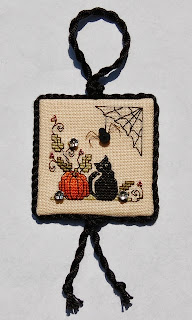 The July theme was bats and/or spiders.
I finished stitching this in July,
but put off the ornamentification until this past Friday.
This was another one that was very annoying to complete
and I'm not at all happy with the way it turned out.
Hopefully, I will have so many tiny ornaments
on my Hallowe'en tree this year
that it will get lost in the crowd!
(I won't bore you with what's wrong with it.)
And the August ornament: 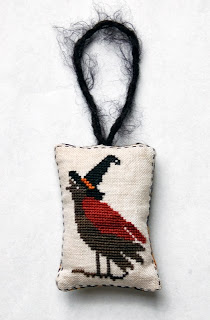 We got to choose our theme for August,
so I chose All Dressed Up
from the BBD Trix or Treat booklet.
The original design had a diamond border,
but I omitted that in order to
make the ornament smaller (for my small tree).
This is 40-count Heritage linen--again.
I am so used to using two strands
that I started out with two and then
decided to just go with it.
It was a little more difficult to find the holes
but the coverage was sublime!!
Don't worry--it's over two, not over one!
I put the black running stitches in at the end
so that my seams would be somewhat straight
when I sewed it all together.
I had every intention of taking them out,
then decided that I kind of liked the effect.
Not perfect--a little funky even--
but I'm happier with this one than the July ornie.
And while I had my sewing machine out... 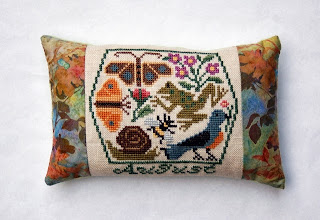 ...I decided to finish this little piece as either
a small pillow or large pincushion (take your pick).
The design is PS Summer & Winter's August.
I finished stitching this in August,
but put off the finish-finishing until now.
The good news is that
I believe we will have an August in 2014,
and it will be displayed then!
The batik fabric, which is a pretty good match
if I do say so myself, was in my stash.
And in between all the stressful finishes
was I stitching on something soothing
like a Lizzie-Kate on 14-count Aida?
Uhhh, noooo.
I decided to pull out
Twisted Thread's Lofty Pumpkin.
Here is what it looked like after my June start: 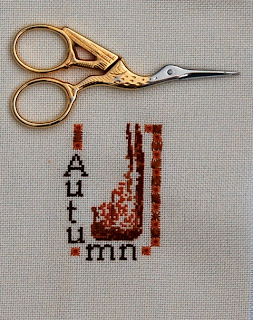 This is 25-count Lugana, 1 over 1,
with lots of confetti stitching!
Let me explain this choice:
I switched out my little seasonal cubby-holes
at the beginning of September.
I have five of them and only three are filled--
all with pumpkin designs.
So I remembered I had this pumpkin in the works.
By early Saturday, stitching it was driving me nuts
and I figured I would just put it away
and finish it "later on."
As a matter of fact,
it reminded me more of an ear of Indian corn
than a pumpkin.
But by the end of Saturday I realized
I had gotten a whole lot of stitching completed!
This is what it looks like now: 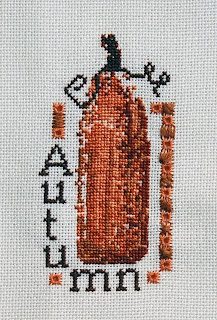 Still a bit of 1-over-1 confetti stitching left,
but it's almost there.
And more good news:  I have in my stash
the cutest, most perfect frame for it!
Once I have it finished and framed
--hopefully very soon--
it will make a final appearance on this blog.
So that's it from here.
Hope you all had a fun, relaxing weekend.
And thanks for visiting!
Posted by Southpaw Stitcher at 10:33 AM 12 comments: