There's been a bit of stitching and some sewing (say what?) since my last proper update in March, and I've got a bunch of stuff to show you.  Let's take a peek. 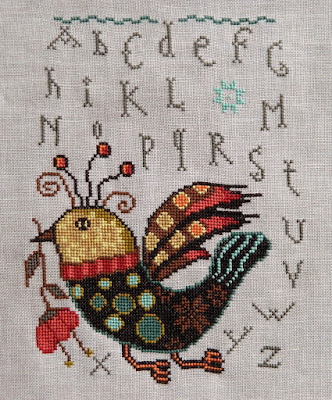 First up is a finish!
Barbara Ana's Funky Bird.
She suggested finishing this as a ditty bag,
but I'm going to do a small framed piece.
He looks like he's been eating
a lot of those flowers, doesn't he? 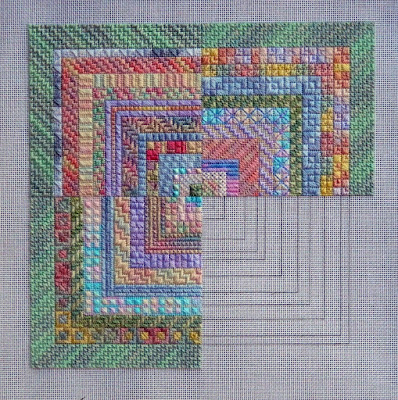 Here is Needle Delights Originals'
Spring Logs.
It was half done last time we checked.
Actually, I'm a wee bit farther than this,
but this was a good point to take the photo.
I'm on track for a June finish. 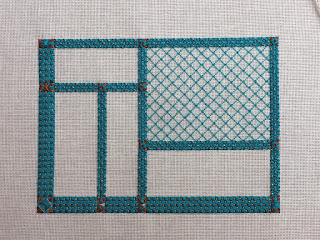 I picked up Kay Stanis' Copper Illumination, too!
Here's where I was at last year. 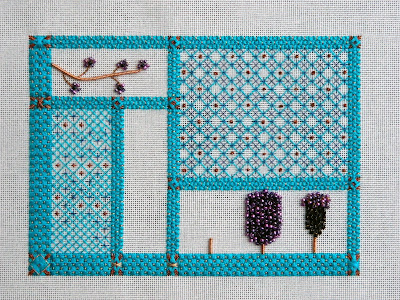 And here's where I'm at now.
I was humming along, doing a little each morning,
then I took a break for my small trip.
And I haven't picked it up since. 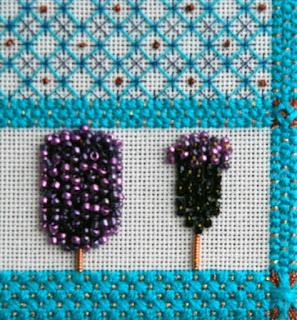 Here's a close-up of the hyacinths.
They're double beaded, first in black,
then the purple goes on top
in a somewhat haphazard fashion.
It's still doable to finish this by the end of June,
but I'm setting aside a 10-dollar bill
just in case this challenge project remains stalled. 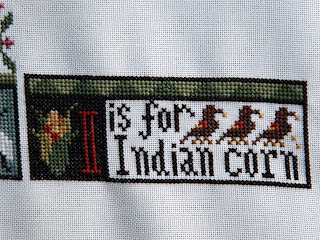 Since my morning stitching slot was vacant,
out came Prairie Schooler's I.
At first I thought Indian corn
was an odd pick for the letter I,
but when I tried thinking of "I" words,
all I could come up with was
idiot, imp, ink, interstate...
maybe ice cream.
I think Indian corn is perfect.

I took a quilt class(!) last week,
sponsored by my quilt guild.
I liked the pattern,
Plum Street Quilts' Shadowplay.
This is my modest start.
It should look like 3-dimensional blocks
when it's finished--
hopefully, some time later this year. 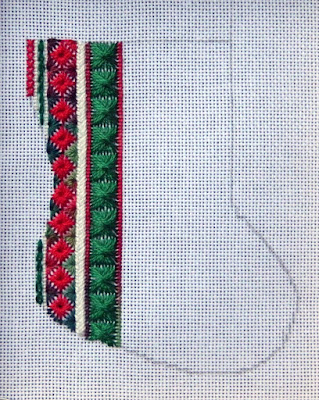 Since I finished a project, why not start a new one?!
I've had this pattern in my stash for years.
Joseph's Coat by Lois Caron.
I'm doing it on white congress cloth,
and it's about four inches high.
The 18-count canvas that was provided
would have made the piece
way too big for an ornament.
(Congress cloth is 24 count.)

Carla asked about the Easter finish
on my last blog post, specifically
did I follow any kind of tutorial
(I'm assuming for the rick rack).
The instructions I used
can be found at A Spoonful of Sugar.

That's it for today.
Hope April is going well for you.
Thanks for visiting!
Posted by Southpaw Stitcher at 1:24 PM 12 comments:

Our friend Jo of Serendipitous Stitching is coordinating the Easter Treasure Hunt Blog Hop again this year.  Blogs participating in the Hop are instructed to post a photo of an Easter or spring-themed stitched piece, and reveal a letter of the alphabet.  All the letters will spell a secret phrase.  Be the first person to guess the phrase and you win a prize!

My Easter-themed piece is called, unsurprisingly, Easter by Lizzie-Kate. 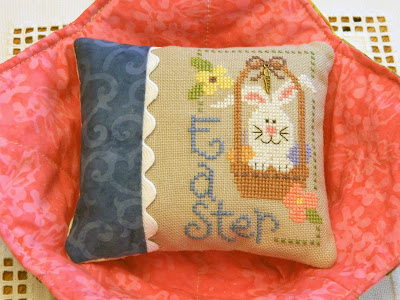 This is one of the charts I won as a
participant in the gift exchange at
the Fancy Works retreat.
And I finish-finished it myself!

The letter I have for those of you
trying to ascertain the secret phrase is... 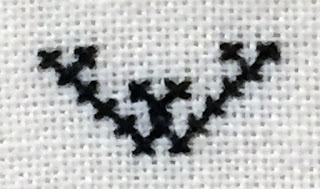 To find the next letter in the phrase, go to:
Alaska Wolf Pack.
Happy hopping,
and thanks for visiting!

Posted by Southpaw Stitcher at 6:16 AM 26 comments:

Did you know that there's a needlework store in Bloomington, Indiana?  I didn't until a couple of months ago. This past weekend, my friend Joyce and I were two of the attendees at their first annual retreat. 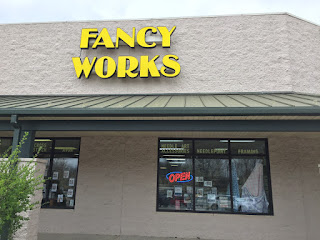 Yes, the name of the store is Fancy Works,
owned by a sweet lady named Dianna. 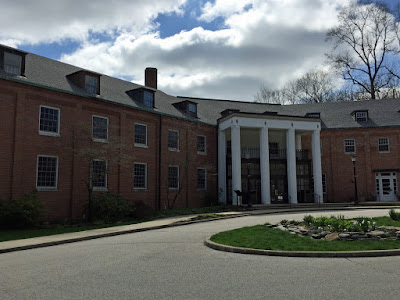 The location of the retreat was lovely:
The Canyon Inn at
McCormick's Creek State Park in Spencer.
The inn was originally a sanitarium!

The retreat ran from Thursday afternoon
through Sunday morning,
and for me the weekend just flew by. 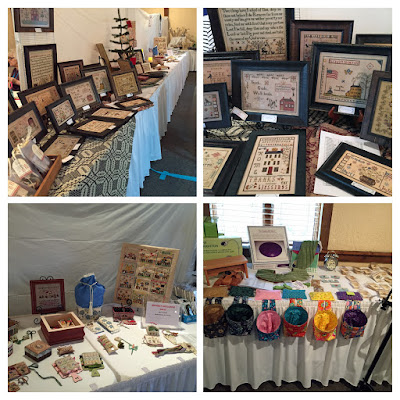 There were lots of goodies lining the walls
in the stitching room to tempt us. 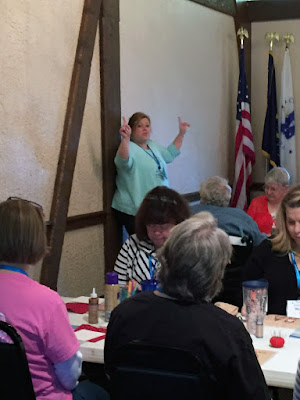 Vonna, The Twisted Stitcher,
conducted four finishing classes:
two on flatfolds and two on ornaments.
She has a wonderful blog
with all sorts of helpful information
for finishing needlework;
if you're not familiar with it, click here. 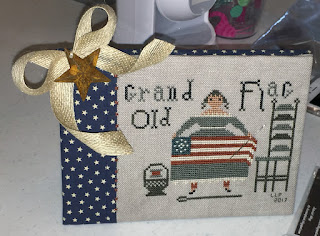 This is one of the finished flatfolds. 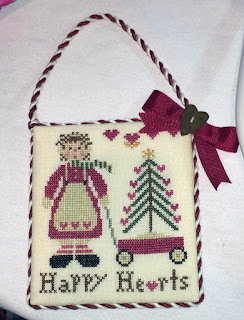 And this is the finished ornament.
Everyone who took a class
left with a finished item.

I chose not to take either of the classes
because Averyclaire! does all of my small finishes,
and I'd rather be stitching than finishing.

On Friday morning, Stacy Nash
made a surprise appearance at the retreat. 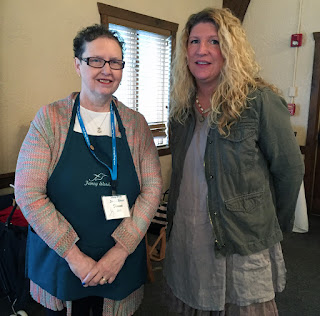 Dianna is on the left, Stacy on the right.
It's fun to meet designers that you've
been following.

The retreat organizers thought up
all sort of games for us to play so that we
could be entertained and win prizes at the same time.
The scavenger hunt was particularly
crazy and diabolical (but fun).
If you didn't win any of the games, not to worry.
There was a steady stream
of free stash given to each attendee
starting before the retreat even began
(a small chart was included with the retreat schedule
and directions that were mailed out),
through and including Sunday morning. 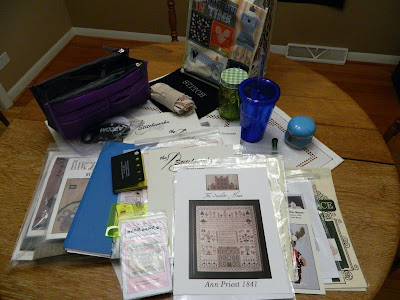 It's hard to show all of the freebies--
the table isn't that big.

And did I mention that a $75 gift certificate
to the Fancy Works store was included? This is how I used it to further enhance my stash.

There was a wonderful masseuse available on
both Friday and Saturday.
Joyce threatened to take a photo of me
getting a massage,
but fortunately that didn't happen.

Most of us participated in a gift exchange, too.
I forgot to take a photo of what I gave away,
but here is what I received. 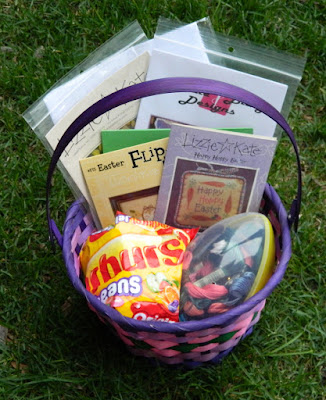 Yes, it's an Easter-themed basket
with jelly beans, a floss-filled egg,
four Easter/spring charts and some white linen.
Fabulous!
I was actually thinking of buying an Easter chart,
and now I have several.
I've already kitted one up;
over half of the threads came from that egg!
You'll see it here later this month.

The seating was six to a table and,
let's be honest here,
sometimes you find yourself seated next to a pill.
But I'm happy to report that
everyone at our table was very congenial. 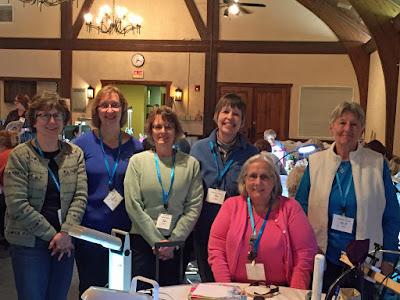 From the left: Carol, Donna, Joyce, me, Claire and Liz.
It was a bonus to meet four new friends.

As for what I stitched, I took
only three projects to work on:
Needle Delights Originals' Spring Logs,
Barbara Ana's Funky Bird and
Lizzie-Kate's A Bit of June (below). 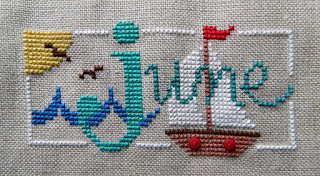 I started this at the retreat,
and finished it after I came home.
I did make progress on the other two,
but they are not quite "blog ready" yet,
and this post is way too long already.

Dianna announced that they are having
another retreat next year,
and there was general merriment
when the attendees heard that bit of news.

A big Thank You goes out to Dianna, Sandi,
and the many Elves who worked so hard
and made this retreat so much fun for all of us.

That is it for now.
Hope your April is getting off to a good start.
Thanks, as always, for visiting.
Posted by Southpaw Stitcher at 8:18 AM 12 comments: