More Frightening than any Saucer in the Sky

That would, of course, be my list of UFOs.  In an effort to perhaps shame myself into finishing one or more of these 'objects' this year, I offer herewith three of the UFOs that are nagging at me the most. First off: 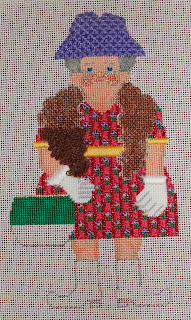 There she is, The Uptown Stitcher by Libby Sturdy.  This was offered in a Guild workshop circa 2003.  Along the way, I have lost: the little one-inch-long feather for her hat, the purple cording that I made for her hat, and various fibers.  I have mounted her on my favorite lap scroll frame (had to sew her on), and I'm unwilling to snip her off for another project until she is finished.  She would look so cute as a stand-up in my quilting room overseeing activities. 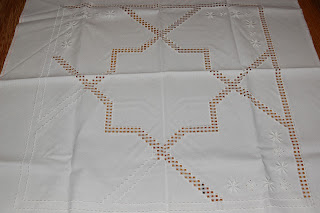 This is Pristine by Cindy Valentine Designs.  It is by far the most ambitious hardanger project I have tackled, measuring approximately 24" by 24".  This piece was originally meant as a gift, but I had allowed myself only three months from start to finish, and then I made various errors in the project.  I did not feel it was 'good enough' for a gift, so the intended recipient got cash instead.   I was quite disgusted with it and was on the verge of cutting up the linen to use in smaller projects.  Instead, it has lived folded up in a bag for over four years.   When I pulled it out recently, I gave it a quick once over and could not for the life of me find the errors, which I know are there.  I will have to give it a thorough going over and may finish it for myself because I am much less picky about pieces I keep as opposed to those I give away--although I'm picky enough about the former.  (My original plan was to actually start the thing over from scratch for myself 'someday,' but why do that when there is so much already completed?)  I still love the design. 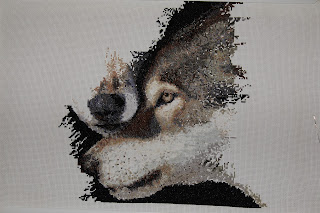 This is Mates, designed by Sherrie Stepp Aweau and featured in a Cross My Heart booklet.  I'm somewhat embarrassed to admit that this project was started in the last millennium.  The easy features of this project:  the ground is aida cloth, all whole cross stitches, no backstitching.  The not-so-easy:  the directions call for 39 colors, almost all of them being shades of gray and brown/beige, and there is a color change on average every five stitches.  That right there is something of a deterrent.  I had finished the bulk of this project in one go.  I had momentum on my side.  I should have never put it away.  Yes, I still think it's a great design.

So, dear, insightful Blog Readers, is there hope for any of these projects?  Which do you think has the best chance of being finished?

Have a groovy rest of the weekend.  Hope you are doing something you love.

Below is a photo of my current WIP, Rainforest Crunch by Needle Delights.  Despite having made a mental vow just weeks before the purchase of this project to work on UFO's only, when I saw the completed piece hanging on the wall of my LNS, adjacent to the packaged instructions, I loved the colorway and knew I had to make the piece. 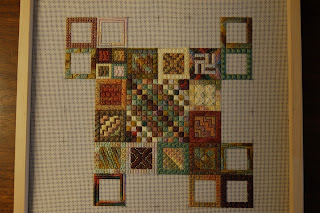 "Well, I'll just get the instructions today," I said to the shopowner.  At that very moment, lo and behold, my eyes rested on the 12 Watercolors the piece called for, all tied together with a pretty white ribbon.  "That's just not fair," I thought as I scooped up the fibers and clutched them to my breast.  "Would you like me to cut you a piece of canvas for that?" the shopowner asked tenderly. Heck yeah!  "And do you have 12" stretcher bars?"   Uh... no.  Into my waiting arms they went.  "Let me just grab the Kreinik metallics the instructions call for," she said.  Wouldn't want to leave without them.  But it wasn't really so bad--I had a supply of tacks at home!

You are probably asking yourself why I was in the shop to begin with.  I had ordered a copy of the Just Cross Stitch Christmas Ornament Issue, and went there for the sole purpose of picking it up.  It's true.  I swear.

Although it's hard to pick, here is my favorite square thus far: 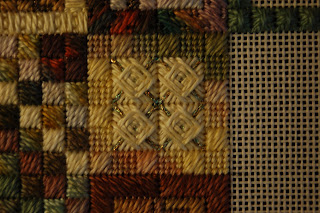 The piece is working up really quickly, and I'll have it finished in no time.  Then, it's back to the UFOs.  Yeahright.

Isn't She Lovely.. Isn't She Wonderful? 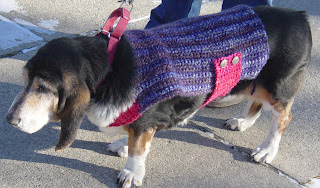 I don't believe that Stevie Wonder was singing about a dog in his song, but that's how I feel about Beulah, my little old lady basset.  She's 12-1/2 years old, and we got her from rescue when she was five and had fallen on hard times.  She blended into the family immediately, and her easygoing nature won everyone over.  Unfortunately, she is suffering from chronic kidney disease, which has caused her to lose quite a bit of hair on her back.  She is being kept fairly warm by a little sweater/blanket that I designed and crocheted from scraps of yarn.  It's just a blue and cream rectangle, with a fixed red strap in front of her legs and a second red strap, fixed on one side and buttoned on the other, which goes across her tummy. 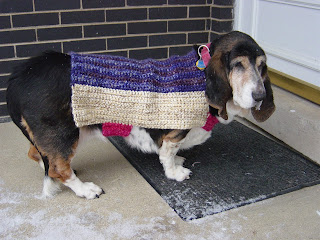 Ding, dong.... Avon calling.  Yes, she stood there patiently for minutes while I got the camera and fussed with it, taking several photos.  DH was appalled that I didn't have enough of one color for her little winter coat, but I think now he is coming to appreciate its (ahem) uniqueness.  I'm just happy that she consents to wearing the thing, because she really didn't appreciate all the "fittings" she had to endure while the piece was being made.  It was finished yesterday, just in time for the sub-zero temps.  She wears it every time she goes out even though, at most, she is out for only 5-10 minutes at a time with one of her human friends to supervise.

Stay warm, everyone, and have a good weekend.

Posted by Southpaw Stitcher at 11:53 AM 7 comments:

With a Little Help From My Friends

Hello, wonderful blog readers.  I've been following many blogs out there--mostly stitching and quilting, I'll admit--and you all have inspired me to jump into the blogosphere.  Welcome to my inaugural post.

I am currently without gainful employment ("retired" just sounds a little too old, somehow), so now I have more time to stitch, quilt, crochet, interact with my dog and husband (more about the dog soon), run around to guild meetings, and do just about anything except housework.  Yes, I do clean sporadically.

My love affair with "making stuff" began back in the 60's when a friend taught me how to knit.  Soon, another friend taught me how to crochet.  I explored macrame and crewel embroidery with yet another friend in the 70's.  At about that time, my boss' wife (yes, she was a friend, too) taught me how to do baskeweave and other needlepoint stitches.  More recently, a friend from one of my embriodery guilds got me started on quilting, even before I had my own machine!  And finally, another one of my guild friends spent the afternoon with me showing me the ins and outs of blogging.  Aren't friends great! 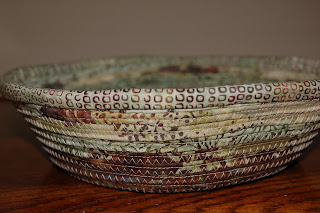 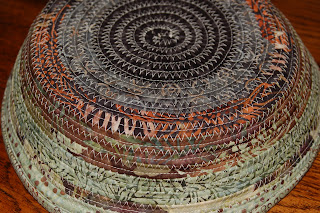 The above photos show my first "finish" of 2011.  It's a bowl sewn together with fabric-wrapped clothesline.  I've been going a little nutty with these lately.  I've made several, and each one has its own unique personality.  I no longer have this particular bowl.  It was a gift to a friend.