Stitching from Stash in July

It's the end of July already and that means it's time for my Stitch from Stash report.  This is a Stitch-a-Long hosted by Mel of Epic Stitching where we all try to stick to a $25/month budget for new stash acquisitions.  I have three finishes and a new little start to show you, too, but first the stats. 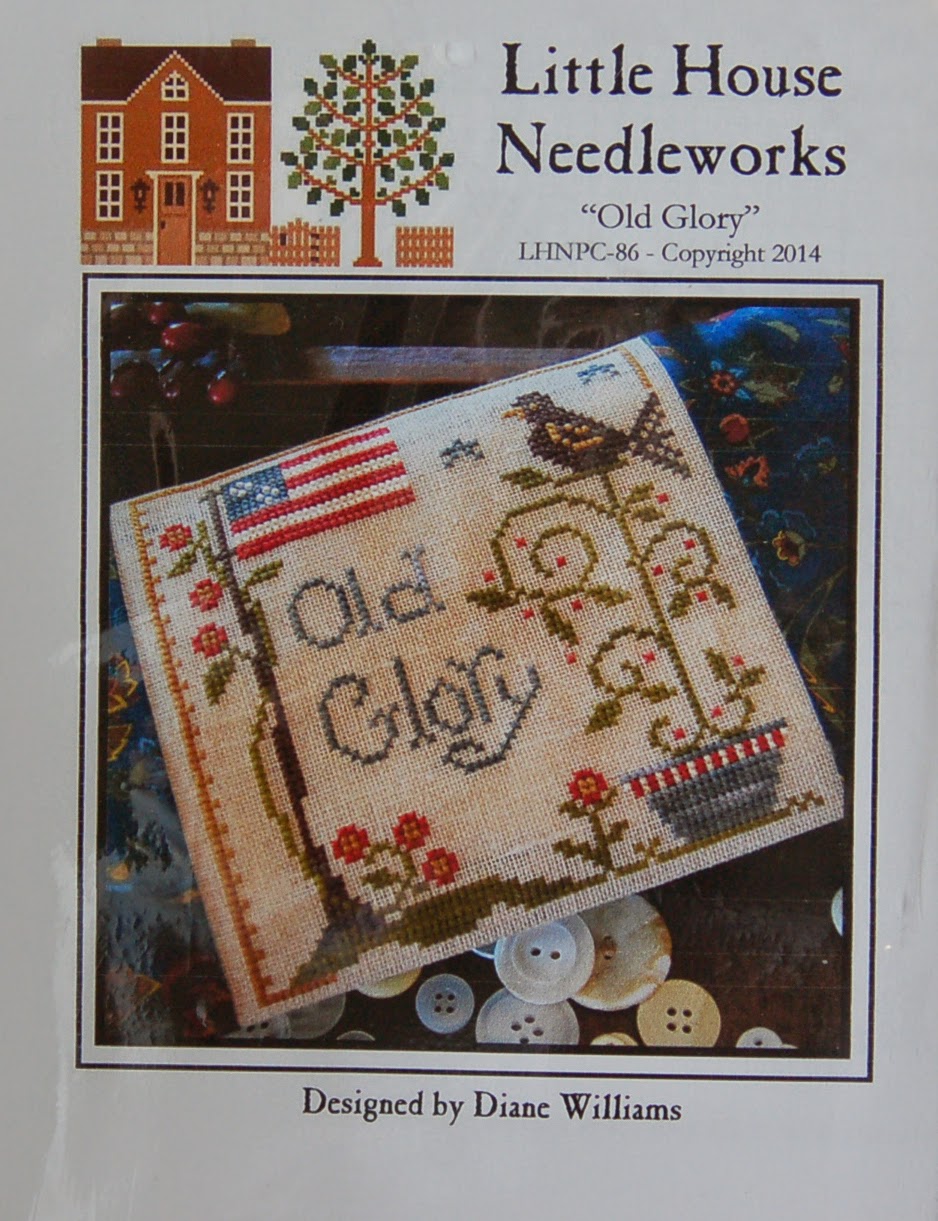 I guess I was just in a patriotic mood.
And, it's very cute!

This month I've been stitching on the usual suspects:  Mates, A Tree by Itself and, currently, 99.  And I stitched and finished... 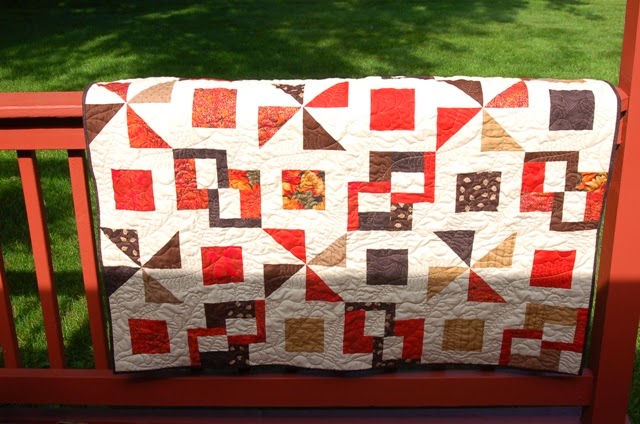 ...my Semaphore quilt.  My self-imposed deadline was September 1st for this autumn-colored cutie, but I beat that by a lot!  (That usually never happens around here.)  The bottom part of the quilt that's in the shade shows the quilted fern design a little better.  You can click to make any of the photos larger... 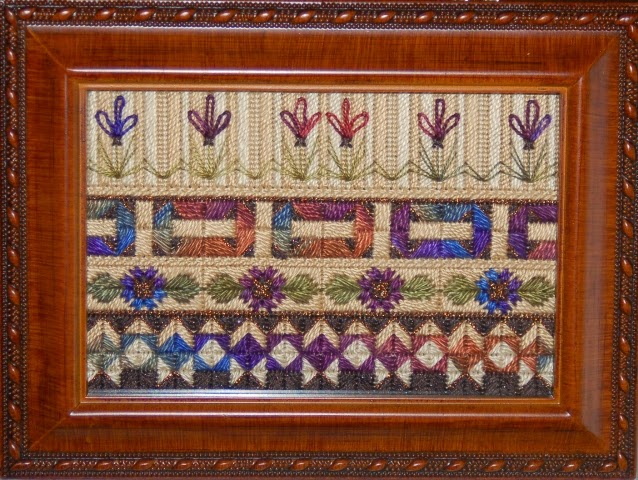 ...and here's Nancy Buhl's Flowers from my Needle from the workshop I took in back in May.  This had been my traveling piece, because it was so mindless and small--and it was stitched on 18-count canvas so it was easy to see.  What looks like a frame is really the top of a lovely music box.  All I had to do for finishing was trim the piece a little and pop it into the top of the box.  Easy peasy!  It was fun to stitch--I'll miss it.

Oh, don't worry!  I have another small 18-count canvaswork piece in my stash that's been kitted up since last year and which I'll start the next time I go a-traveling.  This is why the Stitch from Stash SAL is so easy for me.

And finally, finally:  The Long-Lost Pumpkin.  That's not its real name, but that's how I was starting to think of it, since it took so long to get it finish-finished.  Remember this? 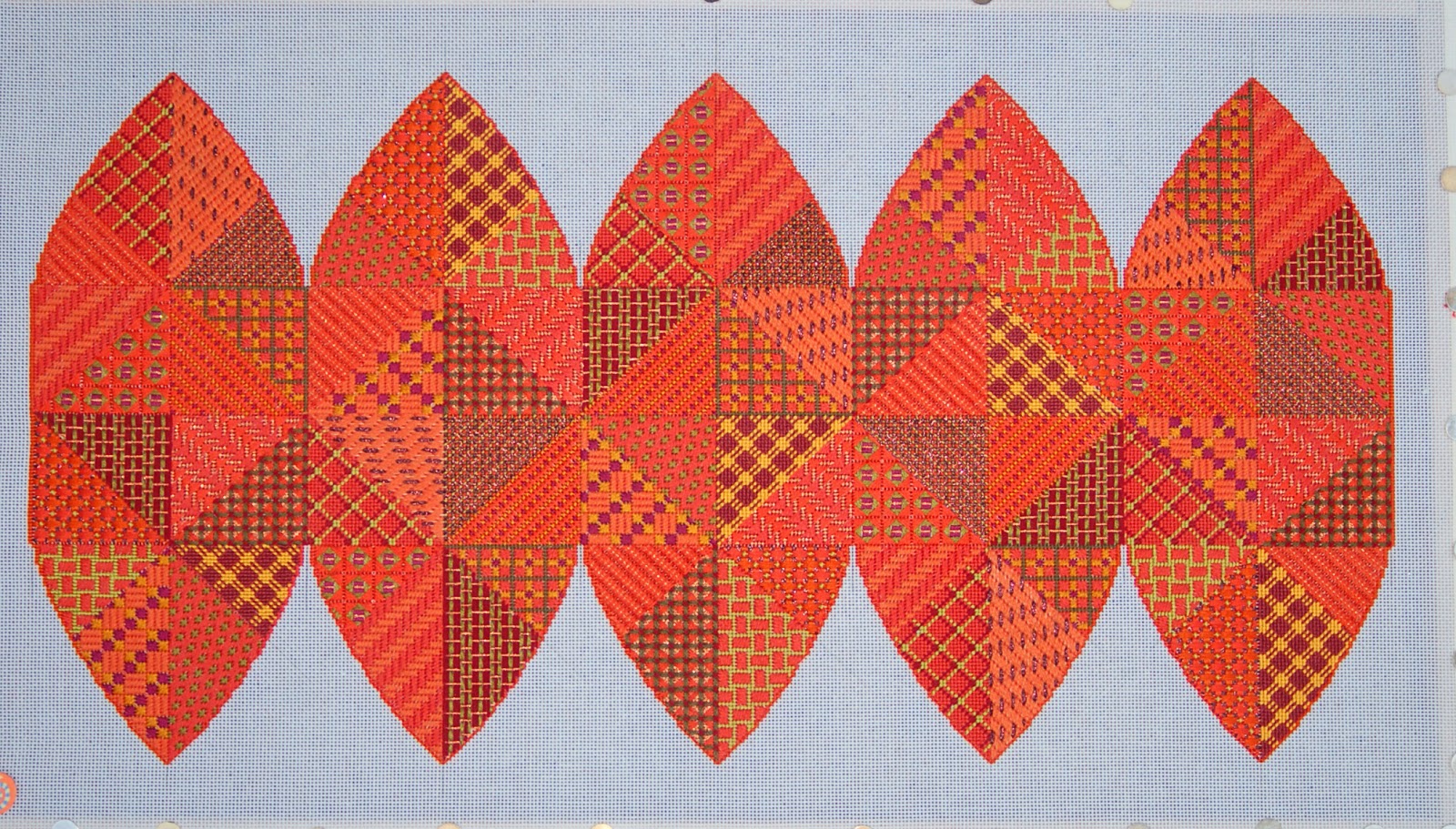 If you've looked at this blog at all in the past year, of course you do!  And you were probably hoping never to see it again!  I posted about my June 4th finish of this weeks ago.  It was at the finisher's until the day before yesterday.  It took a long time to be finished--much longer than the three weeks which was promised--and then it was weighted wrong (very lopsided) and the green crocheted stem had it's wire poking out.  It was a mess.  Why would the finisher/store even think that a customer would be happy with something like that?  I had the store send it back to the finisher to be done properly, even though I had wanted to enter it in the Lake County Fair and didn't think that it could be fixed in 10 days' time, which is all the time that was left at that point.  But it was more important to me to get it finished properly.  So I did get a call on Friday that it was done (again) and went to pick it up.  Saturday was the Fair deadline.    Did I mention that it's a 120-mile round trip to the store?  The weighting issue was fixed and the stem was fixed, but overall it was just OK.  To be honest, I probably would have been happier with the result if I had not been mentally comparing it to the stitched model that Debbie (Stiehler, the designer) had brought with her when she taught the workshop last year.  And the store owner did give me a 10% discount for my extra trip.  All I have to say is it's a good thing that paying for finishing doesn't count against the Stitch from Stash budget, even with a 10% discount! 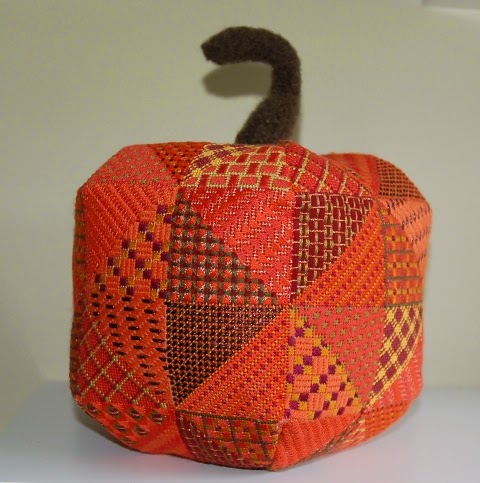 Last but not least,
here is my new little start (from stash, natch): 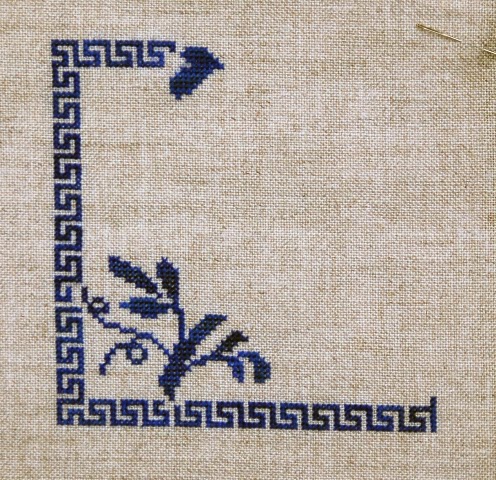 This is Blackbird Design's Bird in Hand.
I seem to be in a bird mood recently.
My friend Anne gifted me the chart a while back.
Yes, I just finished another small piece called "Bird in Hand,"
but that was from La D Da.
This will be just a bird, a branch and a border, no words.
I'm using a dark blue floss instead of the red
which was used on the original model.
The ground is a 40-count piece of mystery linen from my stash.

So that's it from here.
I'll be back in a week or so with
the Lake County Fair report.
Hope you had a wonderful weekend.
Thanks for visiting!
Posted by Southpaw Stitcher at 7:13 PM 8 comments:

It's the 10th of the month, so it's time for the Turtle Trot report.  What's Turtle Trot?  It's a stitch-along hosted by Claudette of BAP Attack.  Everyone who joined picked 10 WIPs at the beginning of the year, and we report on their progress monthly.  And this month I've been turtling along slowly again.  Here's what I did on four of my pieces: 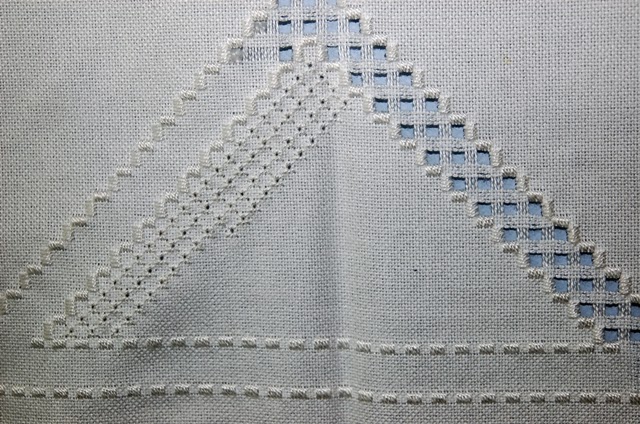 This is Pristine by Cindy Valentine.
It's a rather large handanger table topper,
so I'm only going to show what I've worked on.
I had started stitching eyelets in one of
four large triangles last month. 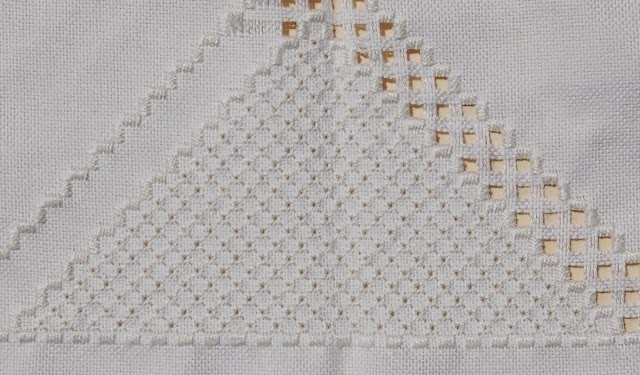 My progress this month.
No, I didn't wash the piece.
I just photographed it in direct sunlight!
I told you it was white!

My progress as of last month. 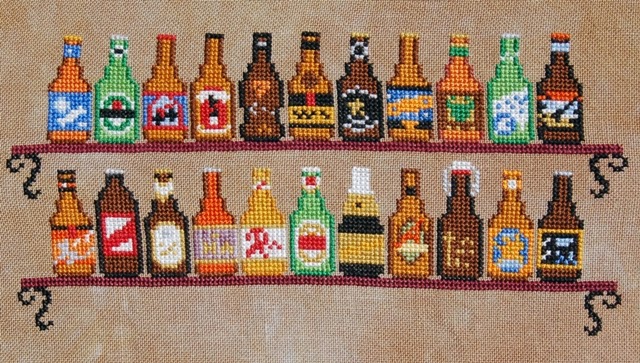 Here's where I am this month.
When I started this SAL in January, I had one shelf completed.
It's taken me until July just to finish the second shelf!

Next are my old and dear friends,
Mr. and Mrs. Wolf,
better known as Cross My Heart's Mates. 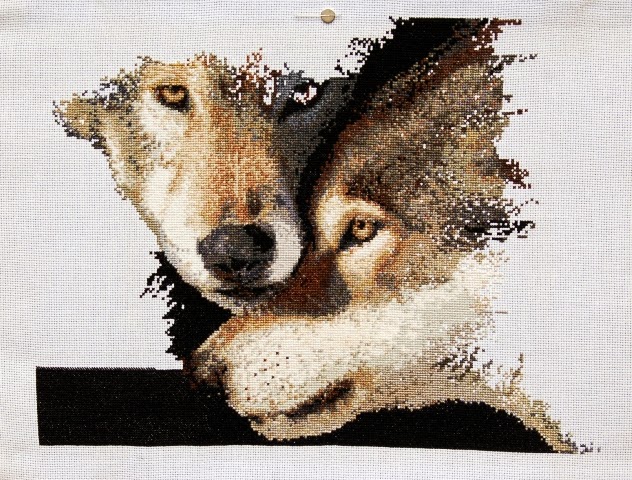 Here's where I was last month. 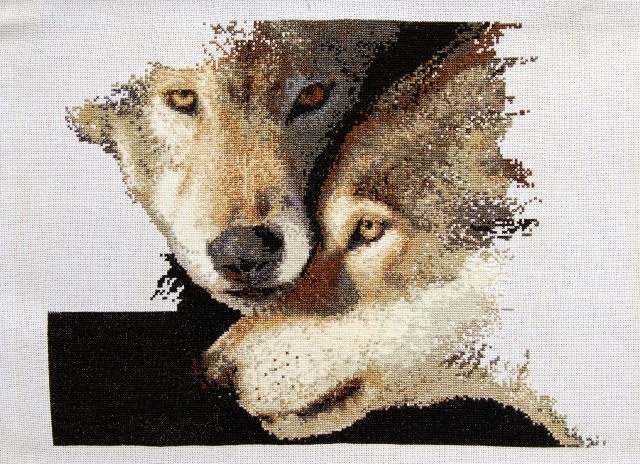 This is where I'm at now.
Would you believe that this is
40-50 hours' worth of stitching?
But despite my relatively slow pace,
I remain happy with the progress on this one
and I'm surprised that I'm sticking with it.

Finally, at long last
I dug out Rosewood Manor's A Tree by Itself. 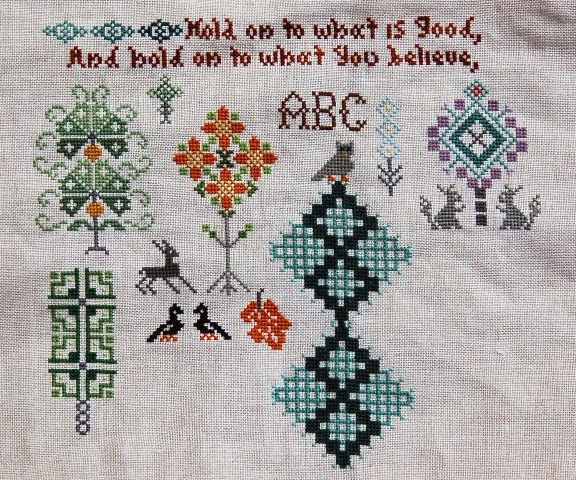 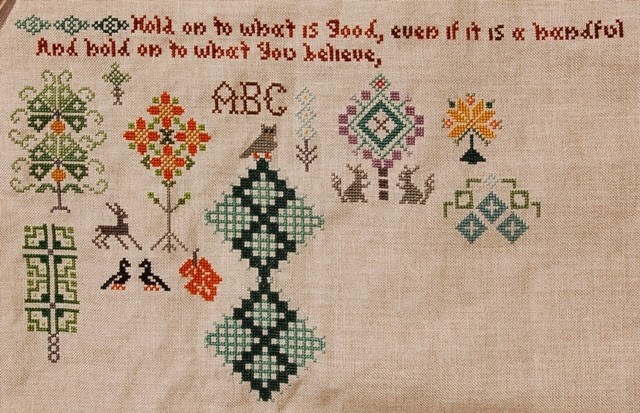 Not a whole lot of progress,
but I intend to change this from a UFO into a WIP,
with some progress made each month.

Well, that's it from here.
Hope you're getting some time to stitch.
Thanks, as always, for visiting!
Posted by Southpaw Stitcher at 3:45 PM 13 comments:

Hope you've had a great weekend with a little time for some stitching, too.  I've managed to get a little cross stitch in this weekend, but earlier in the week DH and I took the train to the Loop for a day in the city.  I brought my camera with, and thought I'd share a few photos of my neck of the woods.

It was a gorgeous day, so we took a walk up Michigan Avenue, starting at Millennium Park. 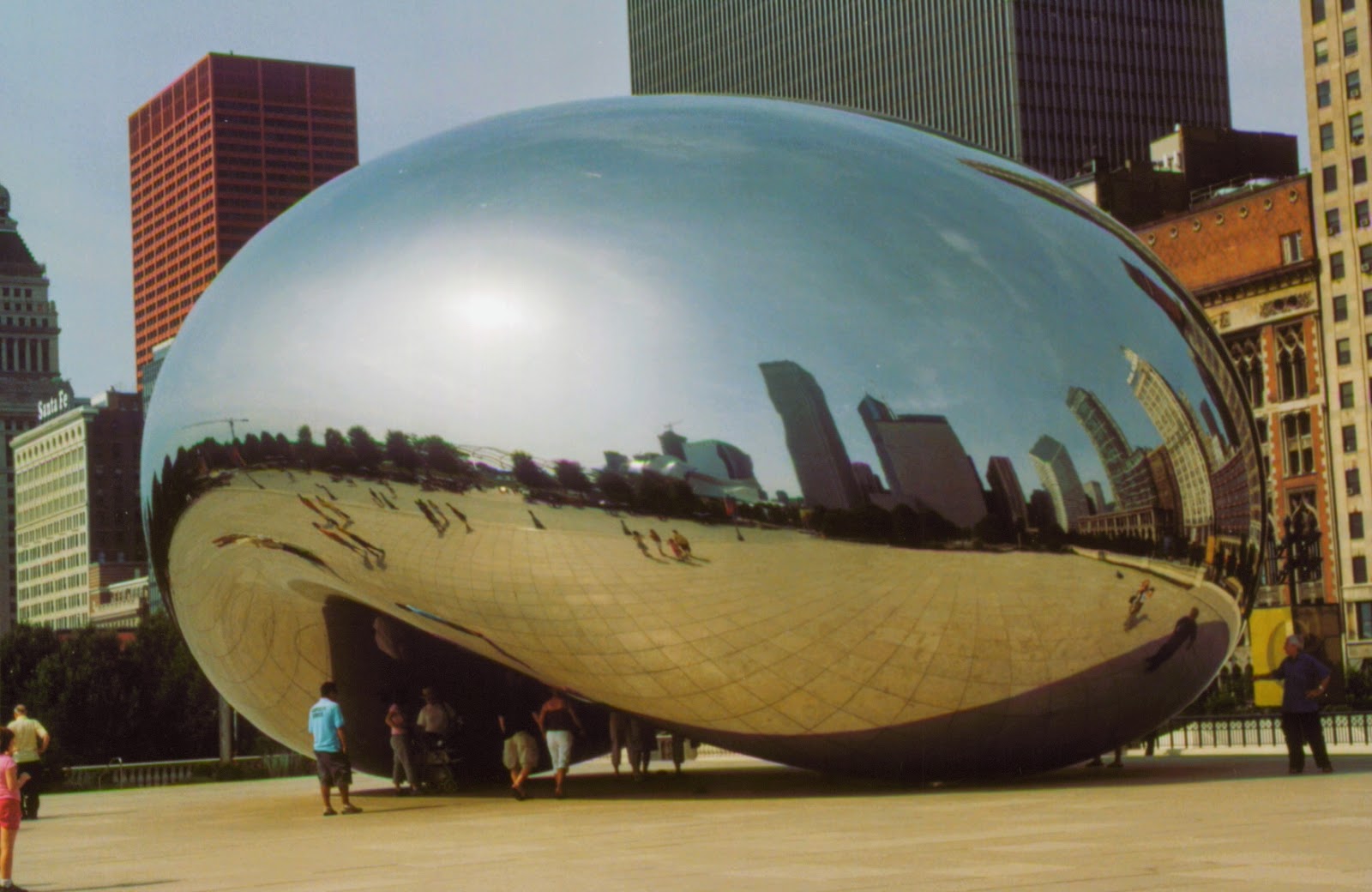 This is Cloud Gate, designed by
British artist Anish Kapoor,
but everyone here calls it The Bean.
You can walk right up to it and take a selfie! 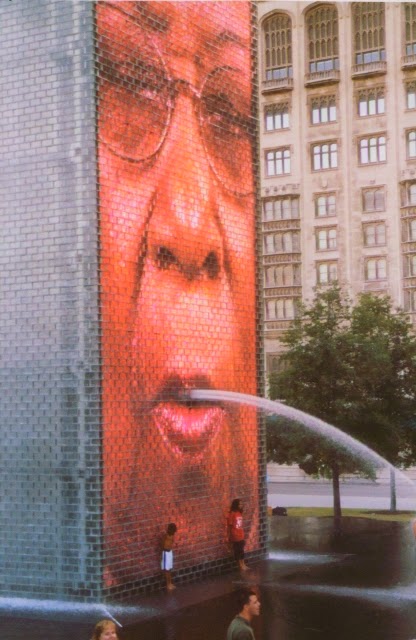 Another fun feature of the park is Crown Fountain,
designed by Spanish artist Jaume Plensa.
It consists of two glass block towers
with images of 1,000 Chicagoans projected onto them,
and a little reflecting pool in the middle. 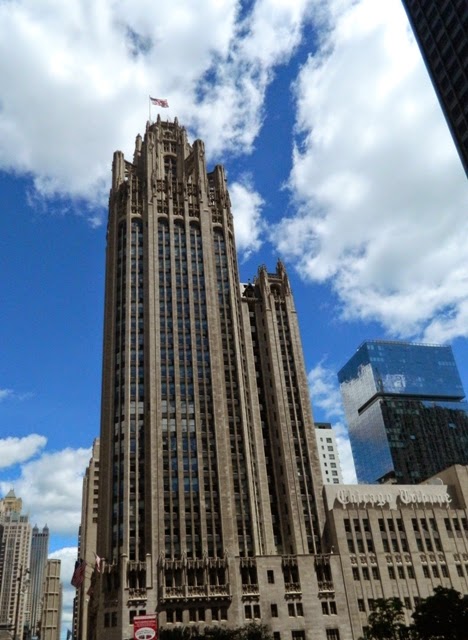 Further north is the Tribune Tower,
completed in 1925 and designed by
Raymond Hood and John Mead Howells.
It's neo-gothic in style with flying buttresses at the top.
One of the many cool things about this building
is the fact that there are almost 150 stones
or fragments of structures from around the world
embedded in the outside walls of the building. 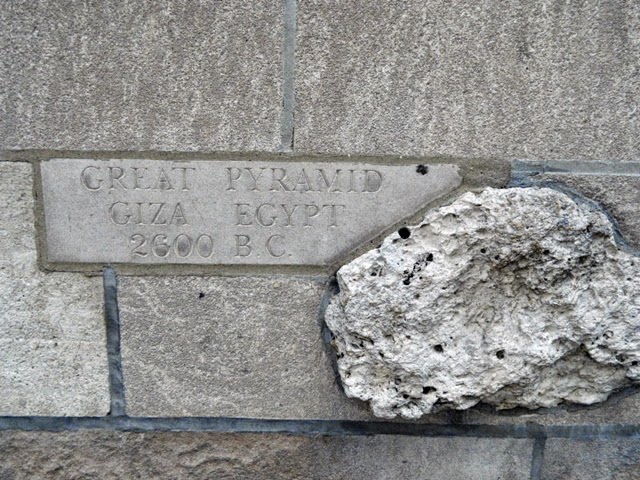 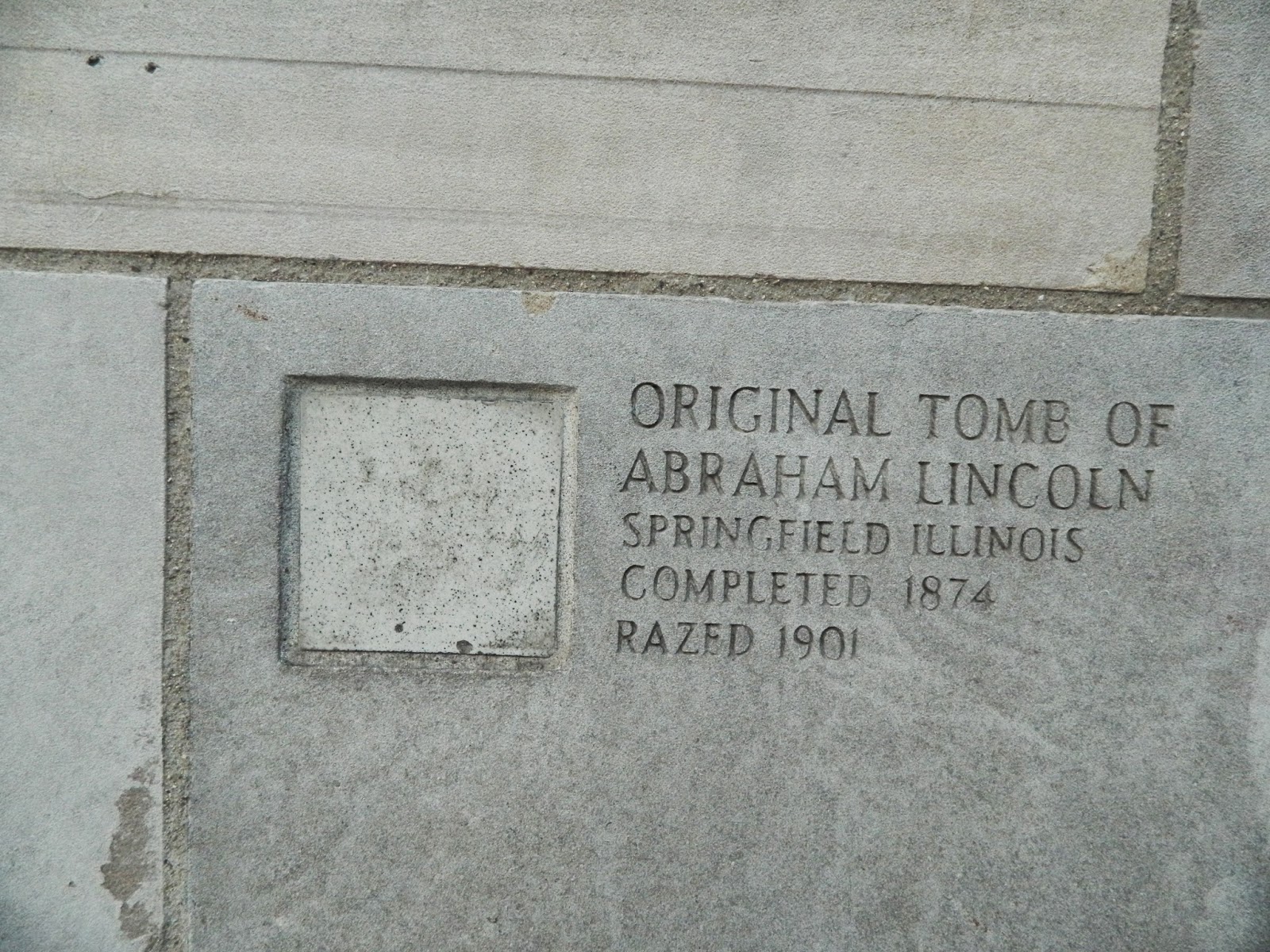 Nope, not gonna make you look at all of them!

Right across the street from the Tribune Tower is the Wrigley Building. 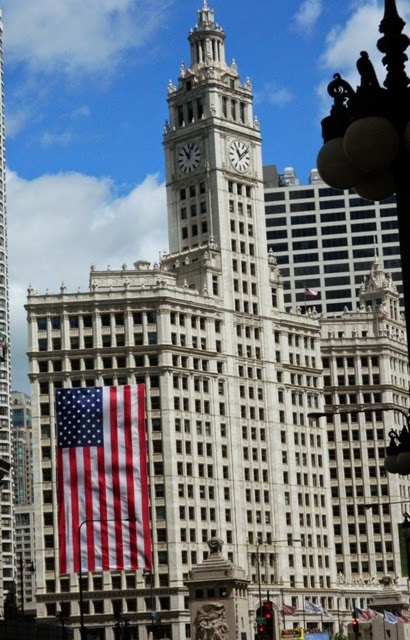 This building was designed by the firm of
Graham, Anderson, Probst and White
for William Wrigley, Jr. (the gum guy).
It was the first major office building built north of the Chicago River
(it was built just a couple of years earlier than the Tribune Tower)
and the first one to have air conditioning in the City of Chicago.

And speaking of all things Wrigley.... 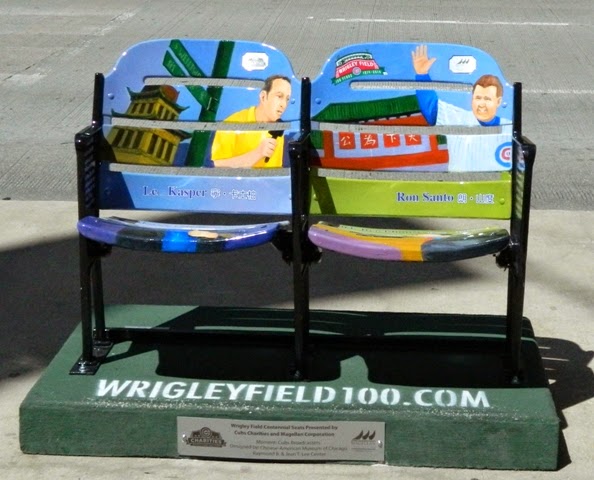 Wrigley Field (home of the Chicago Cubs)
is celebrating its 100th Anniversary this year,
and you can find these decorated seats along Michigan Avenue.
I wasn't going to take a photo, but DH urged me on
(I'm so not a Cubs fan).
It's weird--in Chicago, if you follow baseball,
you're either a Cubs fan or a Sox fan--never both.
I will say that the late Ron Santo was a great guy,
just had the misfortune to play for the Cubs! 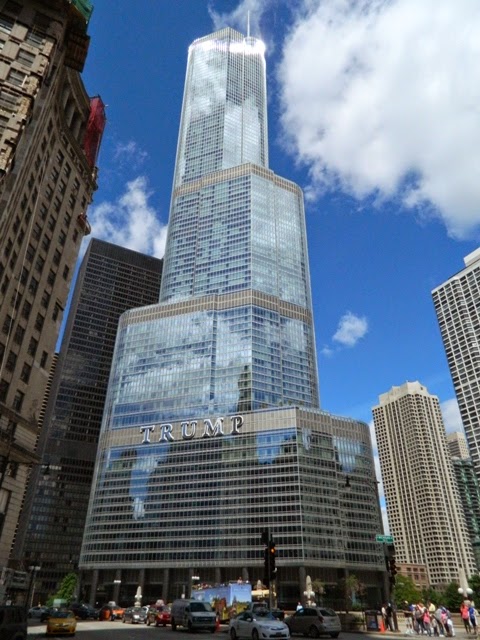 One of our newest skyscrapers, the Trump Tower.
Those letters are 20 feet high and the Mayor hates them
and is looking for ways to get them removed permanently.
The Donald, on the other hand, thinks that they're wonderful
and enhance the values of the neighboring property! 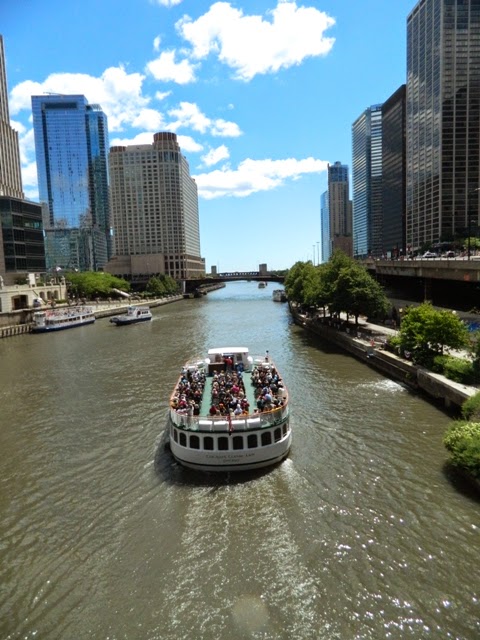 It was a gorgeous day for a boat ride on the Chicago River!

And here's the reason we went downtown: 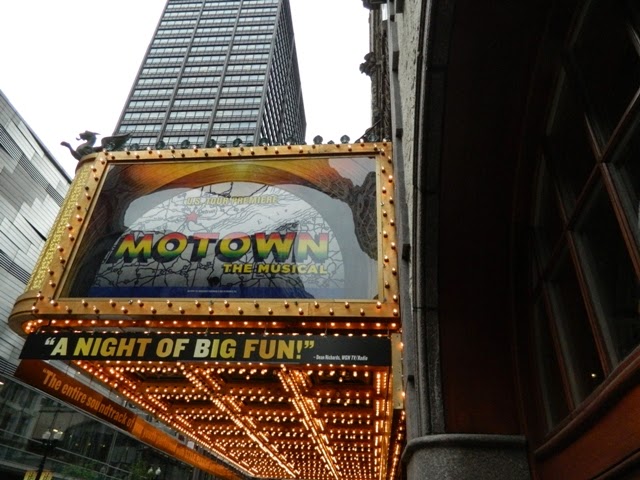 Taking photos was strictly prohibited
inside of the theater, so this is the best you'll get.
The musical was great-- there were over 60 songs
made famous by the Motown artists
of the 60's and 70's.

And here's one last little surprise.
It's stitch-related.
The finishes in 2014 on this here blog
have been few and far between,
not because I haven't been stitching,
but I've been devoting a lot of time
to my larger projects.
But I did manage to finish my funky bird. 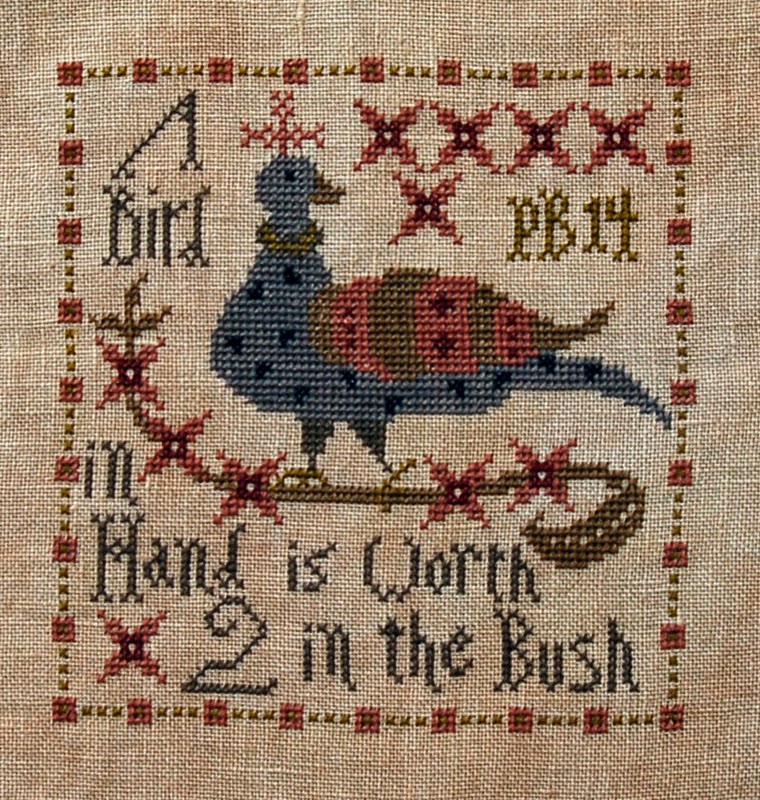 This is La D Da's A Bird in Hand
using the recommended fabric and silks,
except for the eye and spots on the bird,
where I substituted Gloriana India Ink.
The recommended color was just too
close in tone to the bird's body.

It's nice to have a finish once in a while.
I have several other smaller bird designs
which I should plug into what passes for
my rotation these days.

That's it from here.
Thanks for visiting!