The dog is done!  Yes, I'm talking about Boris by Plum Street Samplers.  Once I got all of the frogging out of the way, he seemed to go very quickly. 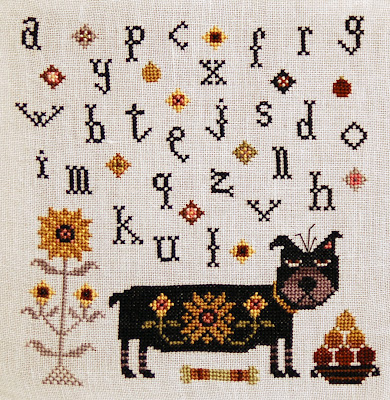 He gives everyone a menacing stare
because he'd like to be thought of as a bad-a**,
but you know he's in touch with his feminine side.
Why else would he have gotten that
lovely sunflower tattoo?
I substituted green for the ecru in the bone,
so it would show up.
(The ground really is ecru and not pink, like in the photo.)
The top piece of "fruit" in the bowl was originally charted as ecru, too.
I decided not to stitch his whiskers
because I thought it made him look too much like a cat!
I bought a frame for him, and I'm going to attempt to frame him myself.
The frame is only 8" x 8", so how hard can it be?
(You probably shouldn't answer that!)

I did some work on Crabby all Year, too.
Here's April: 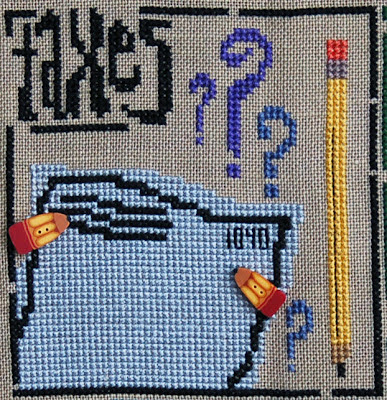 Imagine that you see long, straight stitches on the tax form.
(The folks at Raise the Roof advised stitching them last.)

The entire Crabby design is very specific not only to the USA,
but also to areas that have a humid continental climate,
like northern Illinois.
So to those of you not living in the USA I ask,
do you pay income taxes in April like we do?
If not, what month are they due?

I even finished August! 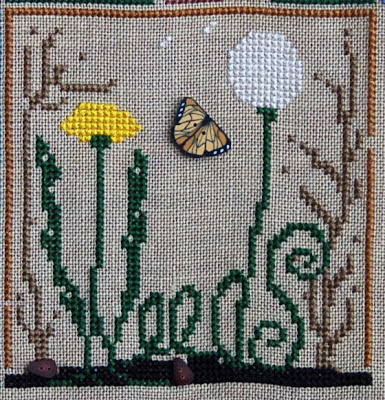 We use an herbicide on our pathetic little lawn
so we don't have dandelions there,
but they actually grow in the cracks in the sidewalk!

Here are the five months which I've completed thus far: 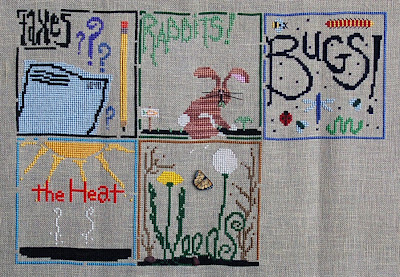 The piece won't look wavy once it comes off the scroll frame
and gets mounted and framed.
But I can't not show you my monthly progress (heaven forbid!),
so you'll be looking at waves for quite some time!

I also started and finished the third LJP ornament
which was featured in my last post--I won't make you look at it again.
Only two more of those ornaments to go!
One finish and three mini-finishes from my WIPocalypse list:
"I done good" this month!

To check out everyone else's WIPocalypse progress,
click here.

Until next month, have a fun and safe Labor Day holiday
if you're a USA blog buddy.
To all my international blog buddies, have a groovy weekend!
And thanks, as always, for visiting!
Posted by Southpaw Stitcher at 6:32 PM 13 comments:

I didn't get quite as much stitching time as I would have liked this weekend (isn't that the way it goes for most of us?), but I did manage to finish the Laura J. Perin ornie that I started on our trip: 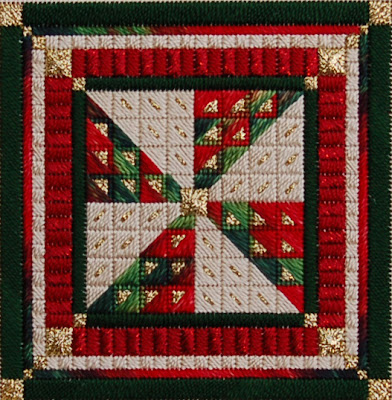 I didn't really have too much more to do on it
by the time Friday rolled around.
Three of these ornies are done now--
two more to go to make my holiday cube.

Here's a pop quiz for all you sharp-eyed stitchers out there.
I do have a little mistake on this one--
didn't even notice it until I looked at the photo.
(And I made the photo nice and large for you, too!)
It's not horrible, and I'm on the fence about
whether or not it needs to be fixed.
Can you tell where it is?
Be honest--my feelings won't be hurt.
Who knows, you may find another one that I missed!

I worked a little on Plum Street Samplers' Boris, too.
Here is where the ground shock comes in.
My LJP ornie was on 18-count canvas,
and Boris is on 36-count linen.
It was a challenge to pick him up
on the same day that I finished the ornie! 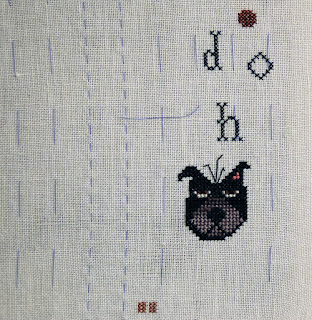 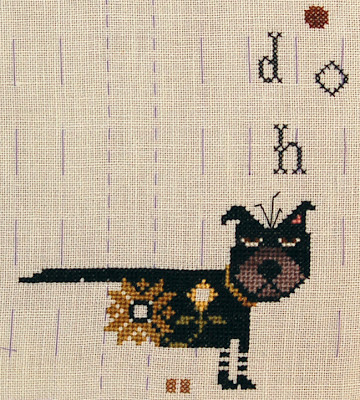 I still have to redo the letters and everything that isn't
"the dog" because they were stitched with one strand.
This photo is more representative of the linen color.

That's it for now.
To see my fellow hermitters' progress,
go here.

Hope you had some time to stitch this past weekend.
Thanks for visiting!
Posted by Southpaw Stitcher at 11:47 AM 18 comments:

Welllll, that may be overstating it a bit.  I'm a city girl after all.  But I wanted to catch you up on the trip we took last week.

First, a little background:  DH is an amateur radio operator and participates in various nets on the radio.  The founders of one such net decided to have a get-together at Beech Fork State Park near Huntington, West Virginia.  We looked at the park's website, saw that the cabins looked really nice, and decided to go.  It was a good decision because we had a wonderful time with a great group of people. 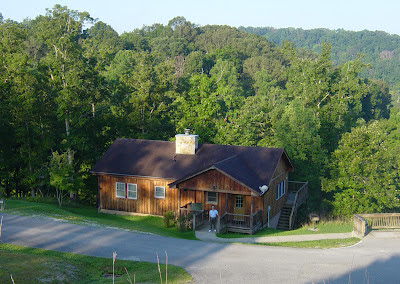 Here is half of the Southpaw Stitcher staff
on the front porch of our cabin.
It was the smallest cabin they had.
The stairs to the right lead to the back porch
which runs the entire length of the cabin.
Two bedrooms, huge living/dining room,
and a full kitchen complete with dishwasher!
All the comforts of home!
Actually, more than the comforts of home,
because we do not own a big flat screen TV!

Only one other XYL came to the get-together.
"What's an XYL?" you ask.
In amateur radio lingo, an unmarried gal is a YL -- young lady.
A married woman is an XYL.
So most amateur radio operators refer to their wives as their XYLs.  (sigh)

The other "XYL" had the same first name as me,
and her interests were...
...stitching and quilting!
What are the odds?
Both of us were glad the other had come.

One of the group activities was a trip to
the Museum of Radio and Technology.
No, it wasn't boring!
They had a lot of interesting old stuff
that a lot of us geezers used to own
and had fond memories of.
There was a large Nipper display--he's the RCA dog.
Lots of old radios, TVs and computers.
I even managed to find some hand embroidery there. 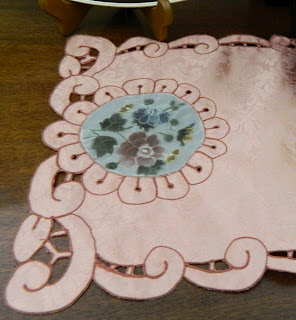 Those are tiny satin stitches with cutwork!

Our last morning there, we awoke to find
what appeared to be an entire herd of deer
outside our front door.
They were entirely too tame. 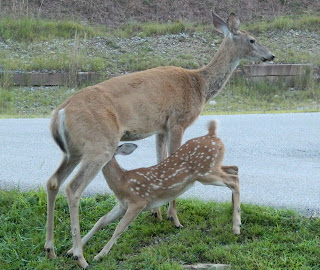 This mom and baby were no more than 20 feet away from us!

I, of course, started a small project while I was on the trip:
the third square from Laura J. Perin's
American Quilt Collection, Holiday Ornament series. 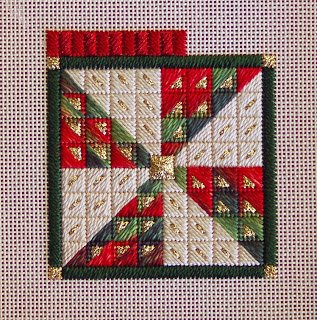 This is how far I had progressed by the time the trip was over.
Canvaswork goes fast!
To see the other two squares I made last year,
go here and here.

That's it for now.
I'll be doing my best to hermit and stitch this weekend.
To find out what that's all about, go to Joyce's blog.
It's not too late to join in on the SAL!
Have fun this weekend.
And thanks for visiting!
Posted by Southpaw Stitcher at 6:38 PM 6 comments:

Thanks so much for all your kind comments about my pyramid!  (I will miss it when it's gone.)  To answer the question "Why 39?":  I am making one for each of the 27 people who will be attending my embroidery guild's workshop in September.  The rest will be sold at my quilt guild's boutique in November.  (Do I belong to too many guilds?)  And I will keep one, or maybe two, for myself.


Yesterday I got my stuff back from the Lake County Fair! 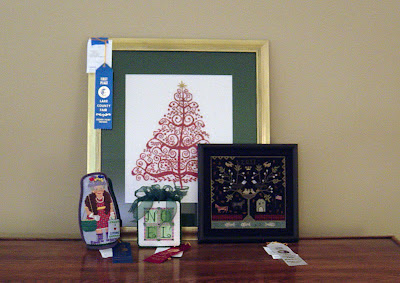 No Sweeps or Champion ribbons,
but I'm quite happy with how I did.

And today, I went to pick up Rainforest Revisited at the framers. 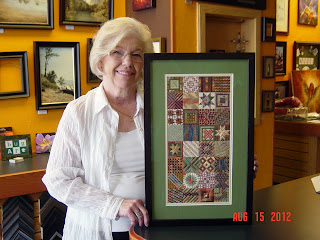 This is Sue at The Great Frame-Up in
Orland Park, IL.
She does all my framing.
I love how it looks--you can tell I'm not a fan of ornate!

This one will go up next to Rainforest Crunch.
Now that I have two that can hang in the space I've picked,
I can take down all the small Christmas
pictures that have been up since last year!

That's it for now.
Hope you get time to do something fun today.
Thanks for visiting!
Posted by Southpaw Stitcher at 5:42 PM 10 comments: 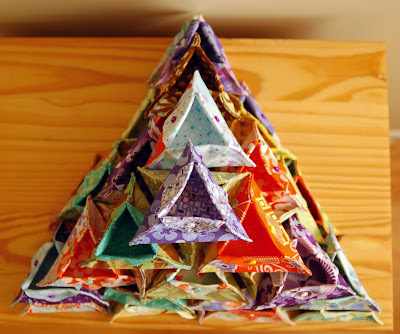 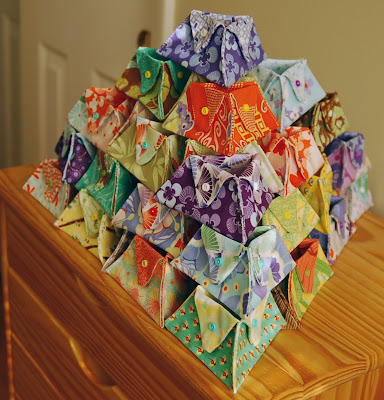 No two with exactly the same fabric.

I'm not an engineer.
The pyramid isn't exactly symmetrical.
But I had fun setting up the photos!
Until next time...
...thanks for visiting!
Posted by Southpaw Stitcher at 10:46 AM 16 comments:

First, I'd like to thank everyone for all your kind comments.  They warm the cockles of my heart.  I love you guys!

This might be my shortest WIPocalypse post ever!  It's not that I haven't been making stuff--it just that the stuff I've been working on hasn't been on my list, and "my" rule is that it has to be on the list you see in the sidebar to be featured in a WIPocalypse update!

So, as for Boris, the poor fellow saw no action since the last full moon.

I did have a big finish about a week or two ago, Rainforest Revisited, which many people saw, so I won't bore you with redundant photos.  It's still at the framers.  If you missed the post about it, click here.


And last, I did manage to stitch July from Crabby All Year: 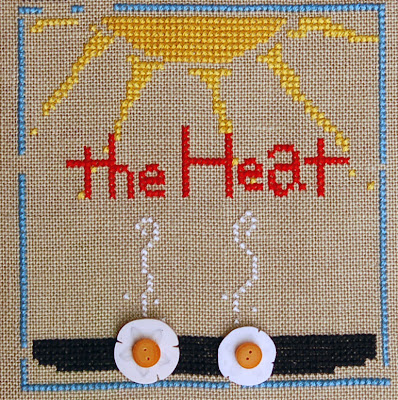 This one is very appropriate for a lot of us this year!

All of the months have their own buttons,
but I won't be sewing them on until all the stitching is done.
July actually has four buttons: two large white and two small gold.
Stacked, they give the appearance of a fried egg.
I couldn't resist putting them on there to show what it will look like.

I did start another month, but won't show it until it's done,
hopefully by the time that the blue moon appears
at the end of this month!

Until next time, hope you get lots of time to stitch!
And thanks for visiting!
Posted by Southpaw Stitcher at 2:49 PM 13 comments: