Certain stitching bloggers from time to time "show off" their UFO's, whether for a challenge, a SAL or other reasons.  I had mentioned mine a while back, and thought that I would catalog them here, in hopes of (shaming myself into?) finishing one or more by the end of this year.  I probably have fewer than some, but more than others.  I do find, however, that my UFO's seem to have one thing in common:  they are all, except two, from either a class or workshop that I once attended.  So here they are, all 14 16 of them (I just found two more as I was going through my stash), from the most recent to the oldest... 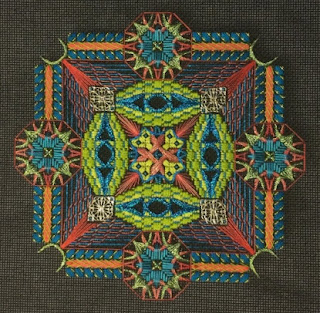 Austin Patch, a 2017 workshop given by Tony Minieri
through my local ANG chapter.
This is Tony's model. 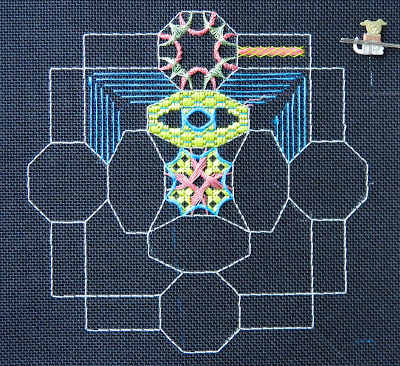 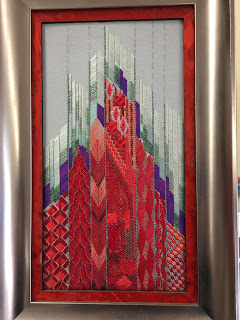 This one is Fire and Ice by Toni Gerdes,
another 2017 workshop hosted by my ANG chapter.
This is Toni's model that she brought
for our inspection. 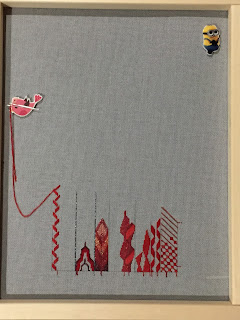 This is what I was able to finish in class.
The stitching is fun and easy, but the silk thread
needs to be ironed before using.   (sigh) 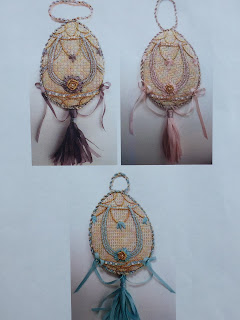 This trio of ornaments is from the
2016 Illinois State Day workshop hosted by
my local EGA chapter.
These were the three colorways
and you needed to pick one for your kit.
I felt that I needed to support my chapter by attending.
That's all I'll say. 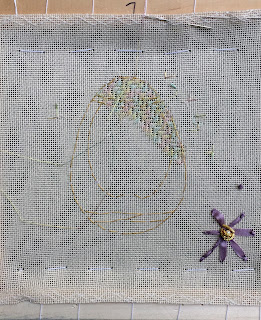 Here's my start.
That's a practice motif on the lower right. 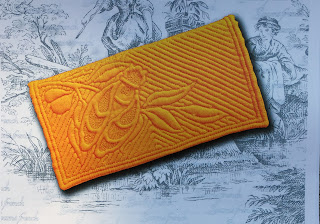 This was a 2016 boutis workshop held after
a regional EGA meeting.
The finished needlebook is beautiful. 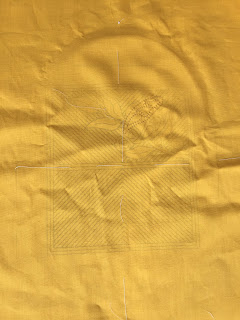 Here is my start.
Yes, there are stitches on that fabric,
you just can't see them
because the thread matches the fabric. 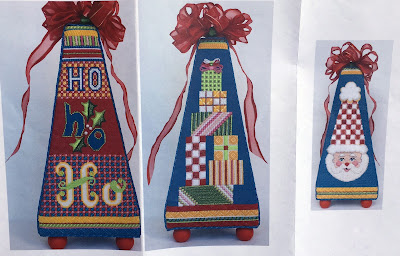 This is very sad.
This is my challenge project for my local
ANG chapter this year.
The deadline is the 4th Saturday in June.
As you can see, it will be a
very cute, 3-sided Christmas stand-up.
One day.
I have not worked on it at all since last June,
when it was chosen by the members
from the three projects I brought to the meeting.
I've thought about it a lot, though.
There's still time, but I may end up
paying the $10 penalty for not finishing. 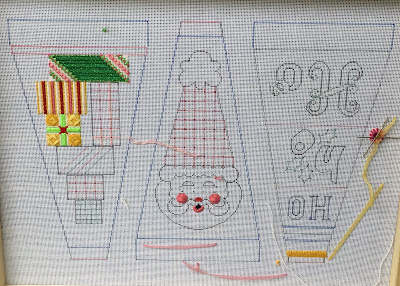 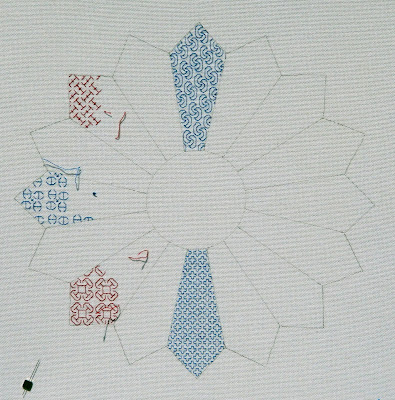 This is called Dresden Doodle.
It was a blackwork workshop taught by
the redoubtable Marian Scoular in 2015.
Each participant received a large piece of
fabric with the design drawn on.
Then we were given a variety of "diaper" patterns,
and told to have at it. 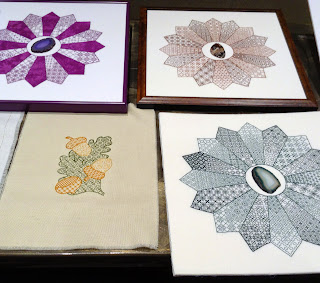 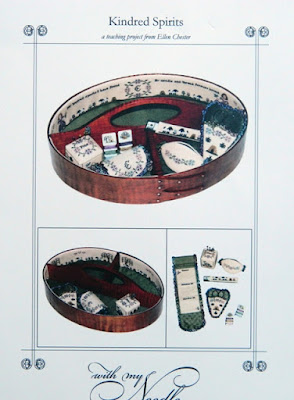 This was another 2015 workshop, this one
taught by Ellen Chester.
Participants received the wooden carry-all,
with instructions and materials for a pin cube,
needle roll, pipkin, ruler cover and scissor case.

I did stitch and finish the pin cube!
I've shown it here before, but you don't
mind looking at it again, do you? 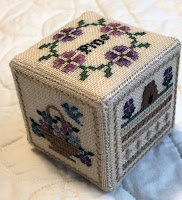 None of the other pieces
have even been started. 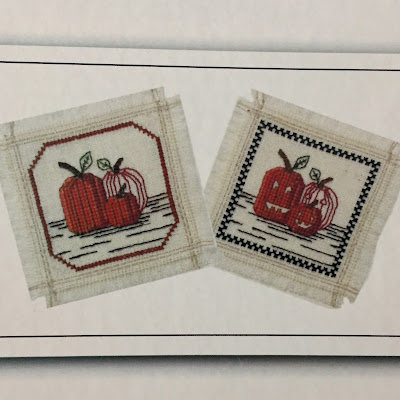 This was a 2015 cyberclass on
reversible cross stitching.
I think I was confused about the half cross stitches,
so I put it aside. 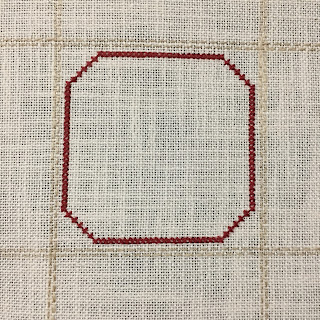 Here is what I've stitched so far.
And it is reversible.
The material provided is very nice.
Looking at these now, I think
I should just finish them up however I can.
I have enough material for
four little coasters.
They won't take long to stitch.
So what if the back isn't perfect. 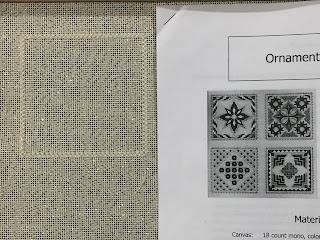 This project really fell into my mental dustbin.
I had it listed under "Kitted" instead of "Started"
in my cross stitch app.
But rummaging through my stash
I did find that I had stitched a wee border
for one ornament.
It's kind of hard to see.
The wavy lines may be due to the
flecks of metallic thread woven into the canvas.

This was a class from my ANG chapter.
If I finish it, I'll get another pin for my nametag.
But on the other hand,
I may already have enough pins on my nametag.
However, I'm not quite giving up on this one yet. 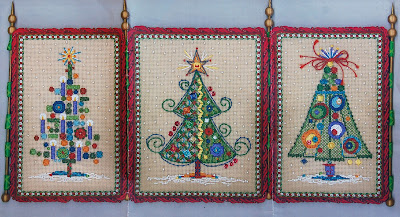 This was a 2014 pilot class that I took through
my ANG chapter.
We were given the middle and the right trees
to stitch and give feedback to the designer.
All required feedback was given.
The one on the right is done. 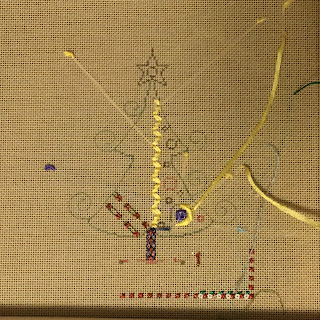 The middle one is not. 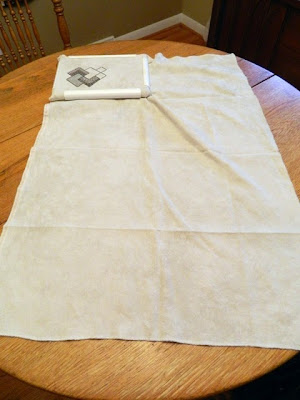 This is Elizabeth Almond's
wonderfully generous 2014 blackwork freebie called
"Save the Stitches."
I fell in love with it back then.
Yes, it is huge.
I don't have a photo of anyone's finished piece. 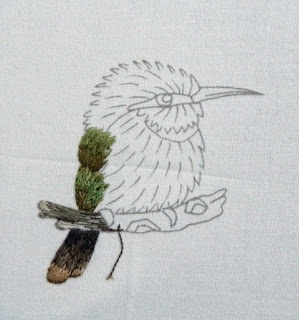 Ah, the Little Bee Eater by Trish Burr.
This was a needlepainting class
that I took at the 2014 Nordic Needle retreat.
Since then, I took another needlepaintiing
class with Tanja Berlin.
(I did finish that piece.)
I plan to rip out what I started
and do this one Tanja's (better) way.
Honest, I do. 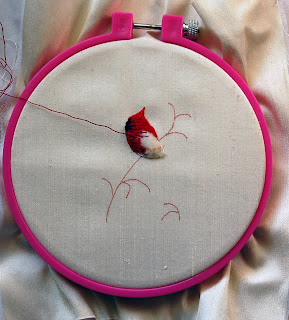 This is from the 2011 EGA Indiana State Day.
The piece is Ruby of the Forest by Marsha Papay-Gomola,
who is a wonderful teacher with a great sense of humor.
Take a class from her if you get a chance.

I swear, every single year I say to myself,
I need to get this guy finished up.
I've got all the padding done,
and a lot of the stitching on the bird.
Those were the only tricky parts.
The finished size would be a small ornament.
I can do this. 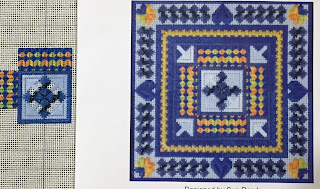 This was a 2011 workshop hosted by
my EGA chapter.
My start is on the left.

As I was examining it today,
I find that it will finish to an odd size (5.3" square).
I have a 4x4-inch box.
Maybe I can eliminate some of the borders
and make it fit into that box top.
It's a plan. 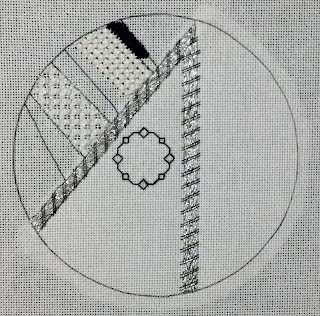 Here is the teacher's model... 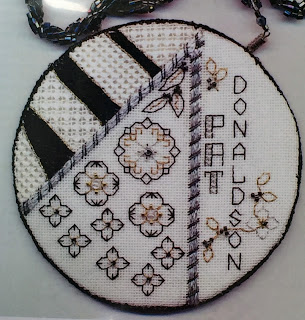 Yes, it's supposed to be a nametag, but it's
almost 5" in diameter which, to me,
seems too big for a nametag.
We did do most of the tricky parts in class,
and it wouldn't take long to finish stitching,
but I'm not sure how I would want
to use this piece, if I ever finished it.
Hmmm. 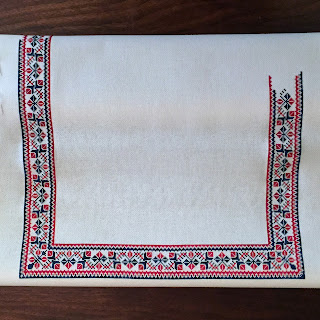 This is truly my oldest UFO.
It's a dresser scarf that I started
around 2000-2001, before I started keeping records,
using one of the patterns from the hundreds
in this cool folk art embroidery book
that I bought back in the day.
I'd give you the title--I still have the book--
but am not sure where it is right now.

Unfortunately, when I peeked into the bag
to check which colors I had been using,
I saw that the red is an overdye: Buckeye Scarlet.  Uh-oh.
Someone wasn't thinking when she chose her colors!
Not being able to wash a dresser scarf is not a good thing.
It's probably the end of the line for this one.

Well, that's it, I think.
If you've stuck with me through
all my thinking out loud, congratulations!
We'll see which, if any, I finish
by the end of this year.
My deadline piece
should be at the front of the line--
and it has the most left to do
(after Save the Stitches, of course).

Hope your projects are going well.
Thanks for visiting!