Less than two months left until 2017.  How time flies!  Do you all have a list of projects to stitch for next year?  I do--but I'll wait until January for the Big Reveal.

In the meantime, I'm still plugging away on my 2016 list, which tends to get longer as the year wears on instead of shorter.  What's up with that?  Here's what happened since we last got together.

In the middle of last month I attended another workshop--my last one for this year, I swear!  This one was Ho Ho Santa, taught by Deborah Forney.  It is a cute 3-sided stand up. 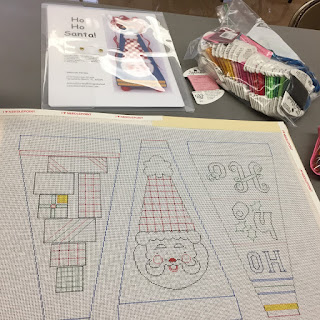 This was our class kit.  Look at all those Rainbow Gallery threads!  And it came with a 30-page instruction book. 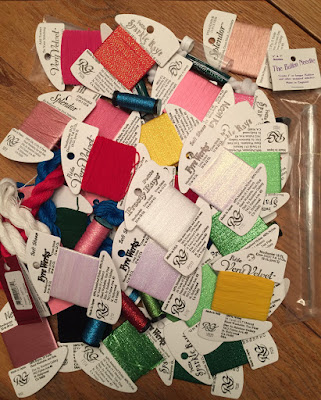 Another view of just the threads.  You can't see them all, because they're piled one on top of the other.  On the right side in the plastic sleeve are two bullion needles:  5" and 7" long(!), respectively. 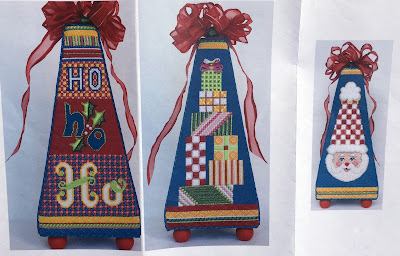 Here are what the three sides of the piece will look like... someday.  Santa's eyebrows, beard and mustache are all bullion knots.  Now I have had a love-hate (mostly hate) relationship with bullion knots in the past, especially the ones on canvas. But Debbie sat down and demonstrated the construction of one bullion knot after the other until we were all confident that we could do one. 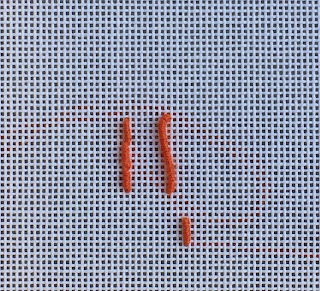 I'm really excited about my doodle canvas.  I know it's only five knots, but the top right knot has 30 wraps!  Very fiddly, and it took a while to get done, but these things don't just pop into place, even for Debbie.  Fortunately, most of the bullions on the beard are 7 wraps or less, like my row of three on the far left. 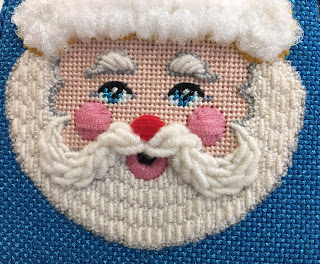 The mustache, however, will be the most challenging part of the project.  And look at that red nose!  I think that Santa must be a tippler.

Here is what I've gotten done so far. 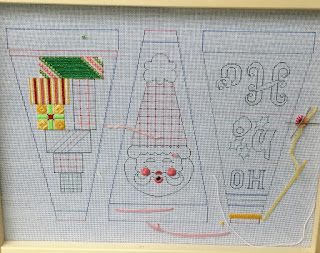 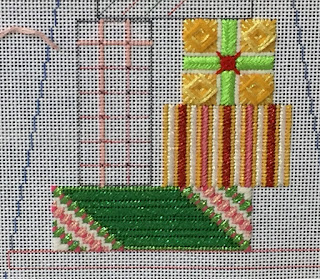 (close up of the packages)
I can hardly wait to be able to get back to this fun project.

But enough of that.
Let's get down to brass tacks with the rotation. 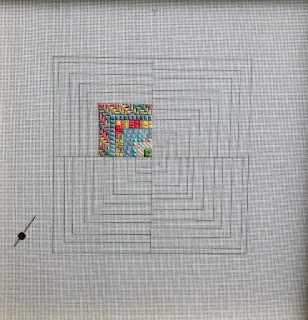 Here's where it was last month... 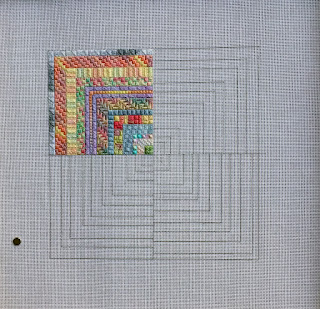 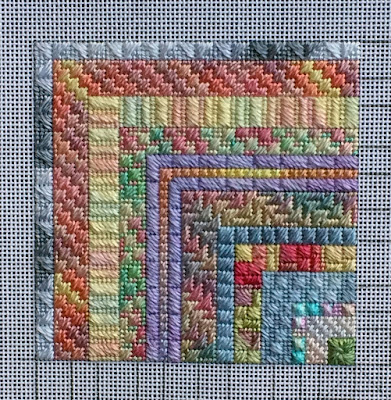 A close up so you can see the texture.
Some of the SAL participants think that the
variegated gray on the outer edge looks
out of place with all of the bright spring colors.
I say that Spring around here is always rainy. 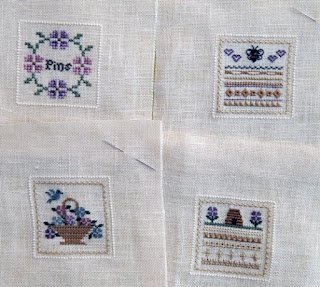 Here's one we haven't seen in a while.
In January, I had 4 of the 6 sides
completed for the pin cube, part of
With My Needle's Kindred Spirits project.
I have been doing a little here and there
on the last 2 sides during the past few months. 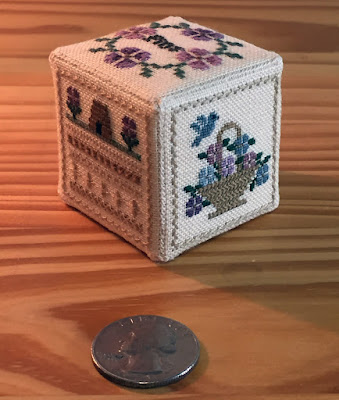 And now I have a completed pin cube.
And I put it together myself!
There was an awful lot of over-one stitching
on 36-count linen here.
I found that cubes are very hard to photograph.
One side always seems to be in shadow,
even with lights on every side. 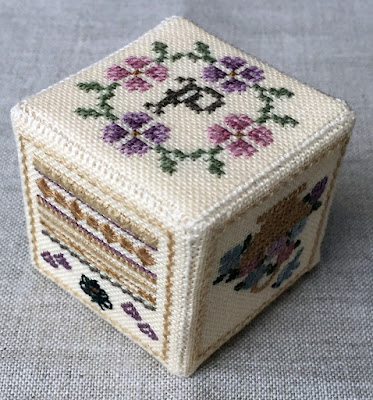 Here is the bottom of the cube.

Now all I have to finish are
the needle roll,
the scissor case,
the ruler cover,
the pipkin,
and the lining of the wooden carrier!
The pin cube took me a year.
Hmmm, let's see...

Finally, the month wouldn't be complete
without Prairie Schooler's Alphabet. 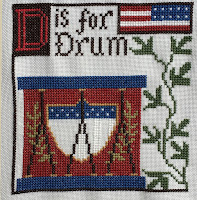 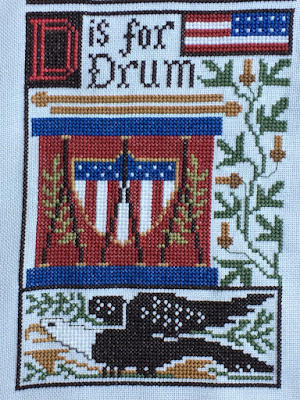 And this month--another finish!
The eagle's head was charted in yellow,
but I didn't care for that
so I switched to white and back stitched
in 3371 so that the head would show up.

I even got a modest start on E.
Wanna see? (Of course you do!) 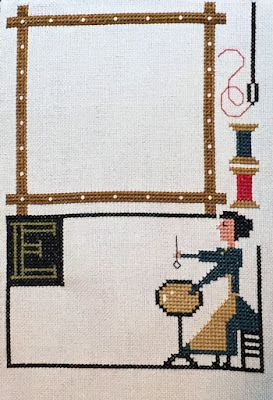 The stitcher on the bottom looks like
she's conducting an orchestra.
I think she needs to sit a little closer to her work.
But her posture's great, though.

Last month I showed you a little raven
that I had stitched.
This month it's finish finished
courtesy of Averyclaire. 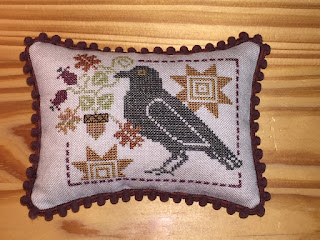 I love the pompom finish.

And here is a pompom tip:
I bought my pompoms from my LNS
and they are fine.
Some discount stores carry
the mini-pompoms, too.
As I was examining the package in one such store,
I noticed that the material used is
100% nylon, and if the pompoms get
near a hot iron, they will melt
quicker than you can say "Eeek!"
So if you see mini-pompoms in a store,
be sure to check the package.
Just so you know.

That's it from here.
Congratulations if you've read this far.
Thanks for visiting!
Posted by Southpaw Stitcher at 1:51 PM 10 comments: