It's been a while since I've posted, so I thought I'd scoot in here before the end of the year/decade to catch you up.  The stitching never stops here at Southpaw headquarters, so here is the latest update. 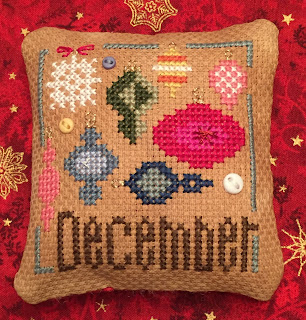 A trio of pillows made an appearance.  First up from the
Heart in Hand Square Dance series: December.
Not my best finish (or photo), but there it is. 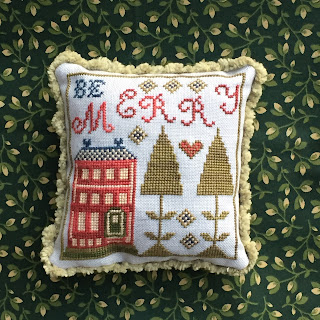 This one turned out a bit nicer:
Be Merry from Chessie and Me.
The fabric that it's sitting on is the backing. 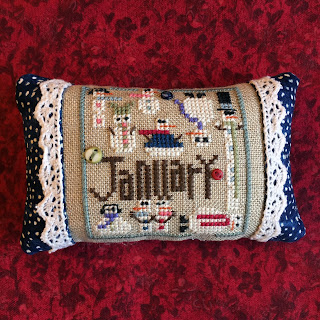 Finally, just in time for January,
another one from the Heart In Hand
Square Dance series.
Those designs are so stinking cute,
I love them all!

You may remember this start
from my last post: 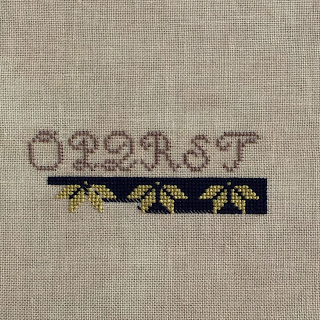 Well, this has gotten some love... 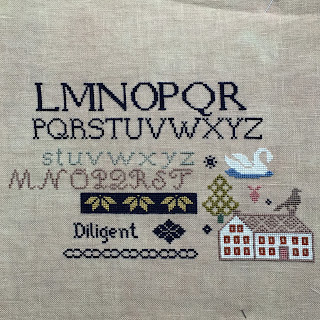 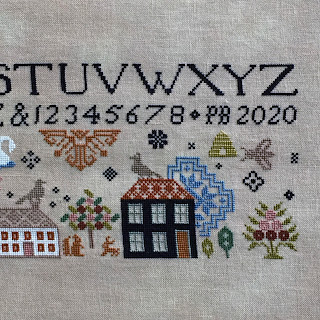 You'll notice that I added a finish date here.
The last time I did that on a project,
I had to rip it out because I was
a little overconfident
in my speed as a stitcher.
But with this project, I think it
should be finished in
the first quarter of 2020.
We'll see.
This is In All Things be Exceedingly Diligent
from Needle Work Press. 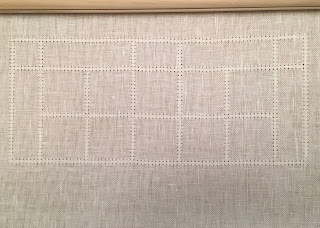 This was going to be the start of my blackwork piece.
The framework that you see there is
the four-sided stitch (a pulled stitch).
The ground was 32-count linen.
But as I arrived at this point,
I recalled all the problems I had
with my blackwork project on linen last year.
It's a little too diaphanous to hide
even the shortest thread carried where
there's no stitching.
Did I learn nothing from that project?
Apparently not.

So I decided to trash what I'd done and start over.
Those are a lot of four-sided stitches,
but I needed to cut my losses.

Here's where I'm at now. 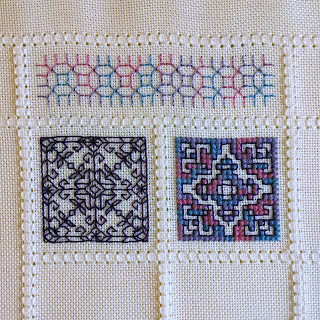 I have just a tick more of the four-sided stitches completed
than are shown in the first photo,
and three of the areas are filled in.
This is 32-count Jobelan (an evenweave),
and it's working out much better.

The design is Pandora's Box from
Elizabeth Almond's Blackwork Journey.
It incorporates not only blackwork and pulled work,
but also cross stitch, Assisi (a type of cross stitch),
and pattern darning.
There are two sets of instructions:
one for Aida and one for evenweave.
Yes, she even specifies evenweave!
And it's a free pattern!
She is one of the most generous people I know.
(Well, I really don't know her, but I know of her.)

She has all sorts of free charts on her website here.
Check it out, if you're interested in blackwork. 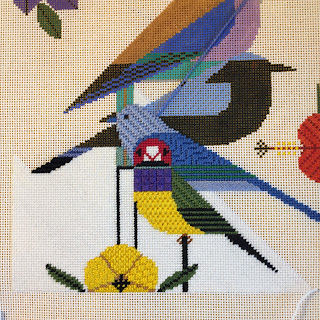 My Charley Harper piece has been
a bit neglected.
It's a little hard to tell right off
what's been stitched on a painted canvas,
but I've got one flower, two birds
and the tail of a third bird stitched,
as well as a bunch of the basketweave background.
A lot of needlepointers of my acquaintance
would not choose the basketweave stitch
as the background,
but I actually enjoy doing it.
It's very Zen.

Last but not least, here is
a January design from Prairie Schooler's
A Prairie Year leaflet... 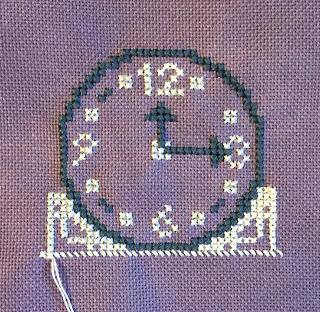 The chart shows the clock at 11:45,
but I figured that that was still December,
so I changed the time!
This is on a fabric called Molino,
and the reverse of the fabric is a
variegated light blue.
I'd never seen anything like that before.
Weird!
I'd show you, but there's no sun today,
and the colors are not photographing well at all.
This is actually a little more purple than it looks.

Alrighty then, we are all caught up.

Molly wants to wave a paw at you
one last time this year... 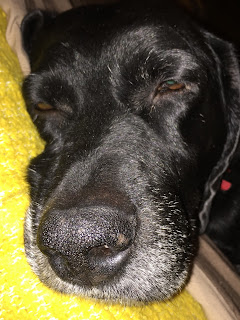 From the looks of things,
she will not be awake at midnight to greet 2020.

Have a safe and happy New Year's holiday.
We'll chat again next year.
Thanks for stopping by.