The great thing about ornaments is they only take about a week (if you're me--I'm not the fastest stitcher) and then they're done! 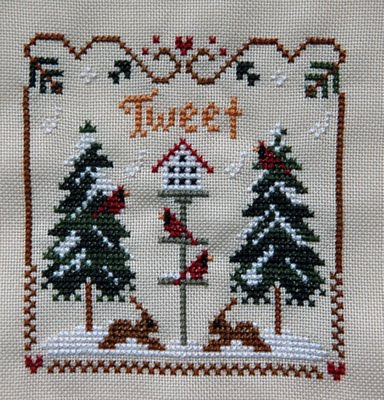 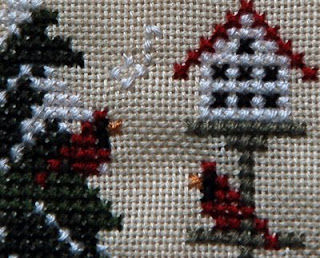 Still a little wavy, but finishing will fix that.

I used a 32-count ecru evenweave
instead of the recommended cocoa-colored 30-count linen.
And it's really a solid color,
despite how it looks in the photo. 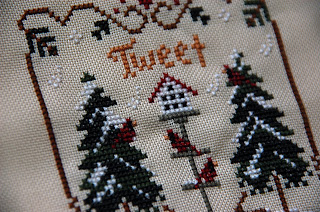 As a result of my fabric choice, the  DMC 712 recommended for the snow and the "Tweet" was too tone-on-tone, so I changed the snow to CC Bamboo and the lettering to DMC 436.

I'm hoping to get one more ornie finished before my next Guild meeting in July, so that I can give all three to one of our finishing wizards.  When I get them back from her, they will definitely be making a second appearance on this blog, because they will be fabulous.

Thanks for visiting!
Posted by Southpaw Stitcher at 4:05 PM 4 comments:

Hello Everyone!
My computer was unplugged and out of commission for a  week while the hardwood floors in the upstairs rooms were refinished, and then we had another week of connectivity problems, but all is back to normal (?) now.


Yesterday, DH and I did "More on 34" which is described as a 100-mile-long yard sale.  It follows Route 34 in Illinois from Yorkville (which is a suburb of Chicago) to Galesburg.  We usually start around Mendota and work our way southwest because the nearer you are to Chicago, the higher the prices are.  We didn't have any specific items we were looking for, just exploring the little towns along the route.  Last year we bought some cleaning rags which were similar to Shamwows, only because they were being sold as a fundraiser by a humane society.  We skip a lot of the sales if it looks like they are selling mostly used clothing, so my expectations of finding any treasures were low.

In Princeton, they have a lot of folks renting table space at the Fairgrounds, and that was going to be our last stop.  As I was browsing from building to building, I passed a table with a large crocheted something on it and a sign with a couple of prices crossed out, the final one being "$20."  My first thought was "They only want $20 for that nice crocheted piece?!!"  But I kept on walking until I was finished looking at everything and had caught up to DH.  He was ready to leave, but I said we had to stop and look at the crocheted piece before we left.  After all, it was handmade and dirt cheap.

I found out the piece was a bedspread made for a double bed.   I thought it could probably be used as a coverlet for a queen, which is what we have.  The folks selling it were very friendly, and the first thing they did was point out the two spots that were ripped.  My opinion was "no big deal."


Here's a close-up of the design.
Evidently several women had looked at the piece and passed on it because they didn't know how to fix it.  My thinking was just keep it from unraveling any more and worry about duplicating the design (maybe) later.  I still thought the piece was a steal.
(NOTE:  I have fond memories of my dear, late MIL Lucille taking me to my first yard sale.  We found a gorgeous solid wood library table priced at $10.﻿  I couldn't believe we had found such a cheap treasure and I was ready to whip out a 10-dollar bill when she asked the seller, respectfully but hopefully, if he would take $8.  I was shocked that she was trying to bargain on something that was already so cheap, and I was afraid that the seller might get mad.  He said "yes" without batting an eye.)
So, channeling Lucille, I asked the seller of the bedspread if he would take $18.  (The real Lucille probably would have started lower.)  Now, as then, the seller said yes quickly.
I threw a lilac-colored sheet on the bed,
and put the crocheted coverlet over it.
It works fine as a coverlet.
If you look closely at the upper right of the photo,
you'll see the lesser of the two rips.
﻿Here is the "bad" one.
My main problem with the piece is that﻿, although I do admire it and think it's pretty, it doesn't really go with the decorating in the house.  But it will probably have a place in the rotation of what I put on the bed.
I hope that you all are enjoying the weekend, and getting good bargains.
Posted by Southpaw Stitcher at 2:36 PM 2 comments:

Heather is offering two giveaways on her blog, and there's still a week left to leave her a comment to win one of them.

One is a needlework giveaway and the other is a knitting giveaway.  To see the goodies and find out how to enter to win, click here.

Good luck!
Posted by Southpaw Stitcher at 5:34 PM No comments: