Anyway, I have three birds to show you today.  The first is Tanja Berlin's Eastern Bluebird which you've already seen, but here is the finish-finish, expertly executed by my friend Averyclaire. 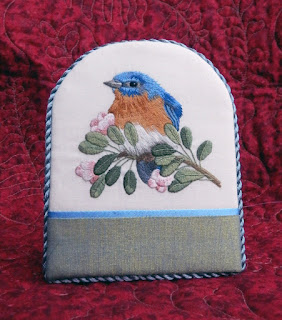 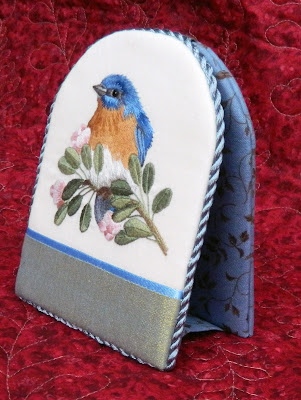 As you can see, she finished it as a flat fold.
I just love it!

And here is another, completely different,
bluebird with leaves... 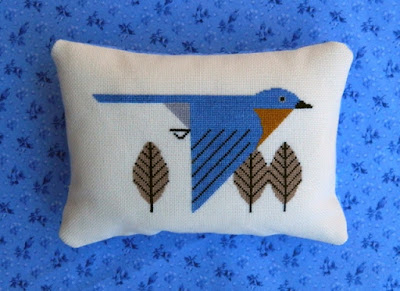 This is one of Charley Harper's
minimalist birds: "Bluebird."
I thought it needed a minimalist finish
which I tackled myself.
I used the blue fabric for the backing.

And, finally, one day a few weeks ago I
was sorting things out, taking apart some old
framed photos when I came across this
piece that I had been using as the backing for a photo! 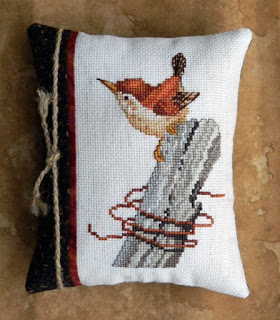 I didn't take a "before" photo (I should have).
It was stapled onto a sticky board,
forgotten for so many years.
I'm calling it Vintage Wren
because I have no idea of either the
name of the piece or the designer.
It's probably from the mid-90's
because I haven't worked on aida cloth
since sometime around the turn of this century.
I gave the piece, still mounted, to Averyclaire,
and she transformed it into this darling pillow!

So there you have the three most
recent additions to my bird collection.
(OK, one wasn't quite so recent, but it has new life.)

Just remember,
"Everybody knows that the bird is the word!"

Thanks for dropping by!
Posted by Southpaw Stitcher at 4:55 PM 10 comments:

Almost Three Years in the Making...

It's finally, finally done:  Rosewood Manor's A Tree by Itself, started on April 4, 2013, and finished yesterday.  This finish deserves its own post, so here it is: 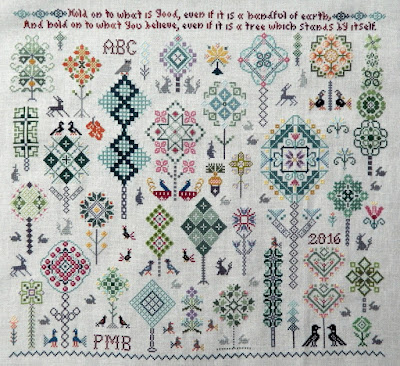 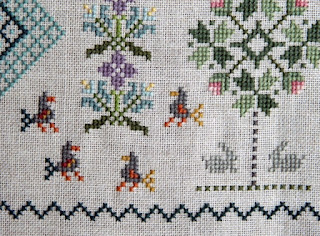 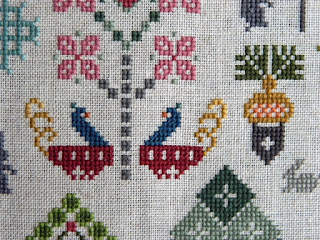 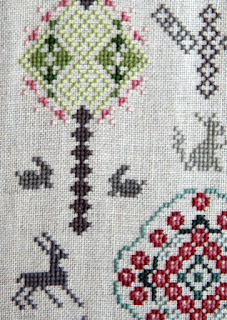 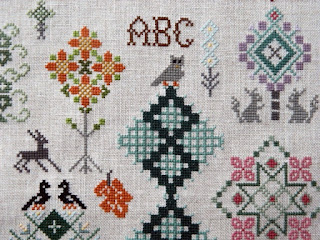 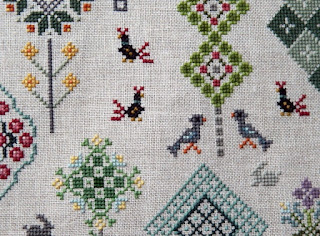 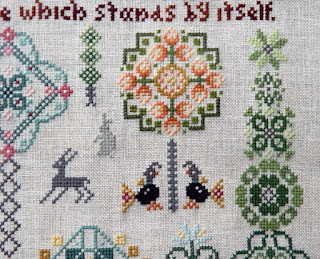 So many zany birds, rabbits and the occasional deer.

Verses are usually what sell me on a sampler.

What slowed me down were all the color changes;
there were 31 shades of green alone!
I'll have to find a monochromatic piece
to start on next...

That's it for today.
Thanks, as always, for visiting!
Posted by Southpaw Stitcher at 10:29 AM 20 comments:

Happy March!  Hope you enjoyed the unusually long month of February.  Even though it was a day longer, it still went by too fast.  But that happens when you get older. 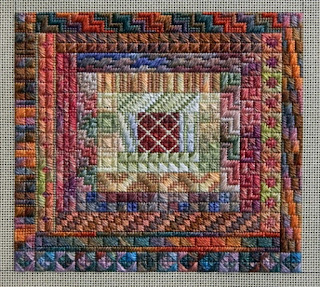 Needle Delights Originals' Autumn Logs.
This is where I left off last month. 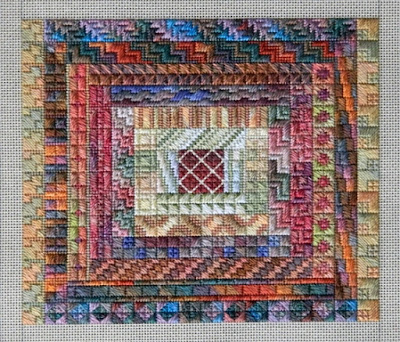 Again, three more logs were added,
but it required more stitching because
the logs are getting longer! 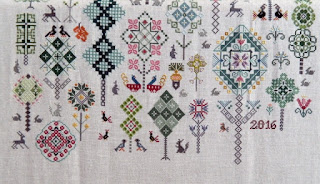 Last month's photo of Rosewood Manor's
A Tree by Itself. 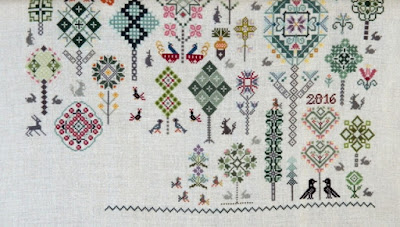 I am finally on the home stretch with this one;
the end is in sight!  Wheeee! 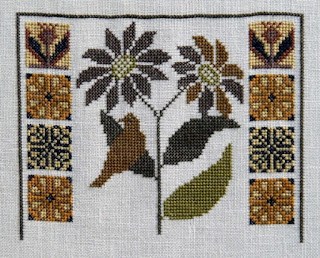 Here is last month's version of
Carriage House Samplings'
The Song They Sang. 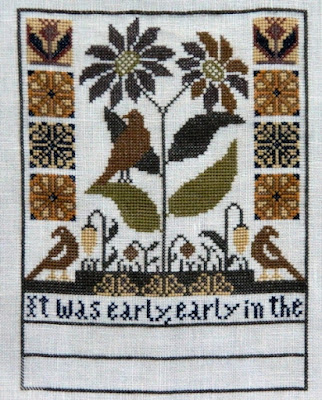 I have quite a bit of letters
to stitch on this one... 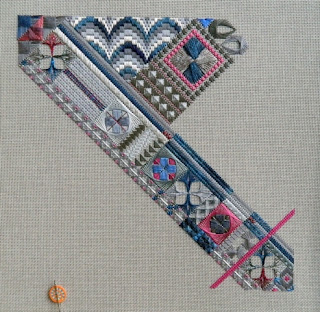 And finally, DebBee's Designs' Angles.
Here's where I was at last month. 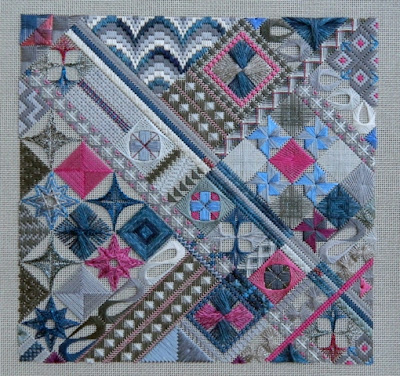 Aaand we have a finish!
I suppose I could have finished any one
of the other three projects with less effort,
but I chose this one to finish instead.
I guess I just wanted to be done
with dealing with all the satin threads.
DH is very relieved that the "devil project"
(his term) is done.

Now that it's finished,
it's time for some close-ups. 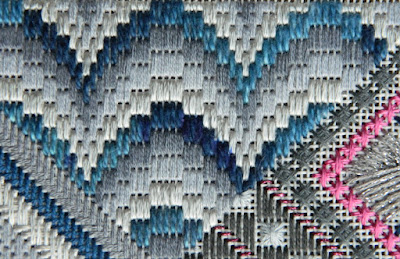 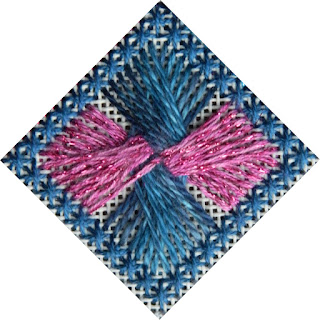 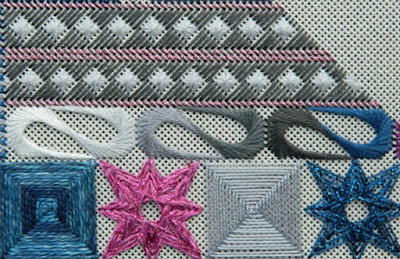 ...those serpentine stitches used up a lot of thread... 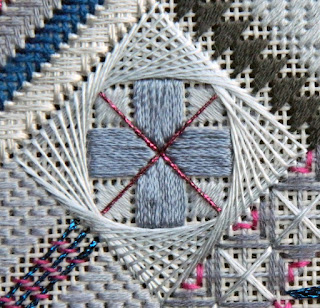 ...this stitch reminds me of the old test pattern
that TV stations would run overnight in the early years.
(No, kids, TV programming wasn't always
broadcast 24 hours a day.)
But I'm dating myself. 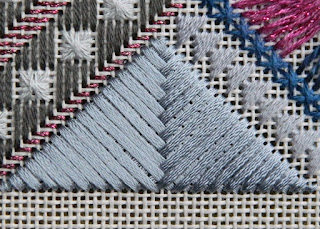 This is my reworked Spratt's Head stitch,
reworked because I used the first length
of Neon Rays right off the card,
and the creases in the ribbon
just won't relax by themselves, as I had hoped.
You can see them in the large photo above.
One must use either a flat iron
or the water treatment to get rid of them.
I chose water, as I don't have a flat iron.
Easy and free.

I should (might) have another finish next month.
We'll see--no promises.

That's it from here.
Hope your weekend was filled with fun
and some stitching, too.
Thanks for visiting!
Posted by Southpaw Stitcher at 5:06 PM 10 comments: