This morning was the Big Drawing.  Molly was presented with the names of those of you who entered her giveaway in the hope that lightning would strike twice and she would again be able to choose just one lucky person as the winner.  Could she do it?  Fresh from a run with her canine buddies at the dog park, we led her to the Dish of Names... 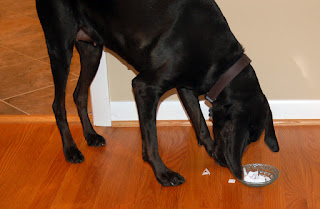 Whoopsie!  There's two names on the floor!
(Maybe she couldn't concentrate
because she hadn't had breakfast yet.)

But not to worry--I had a plan.
Now we had Two Finalists!
The two names went into the dish
and we all held our collective breath... 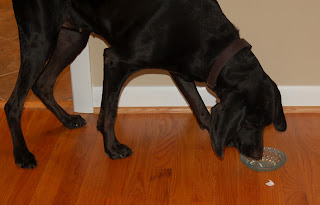 Cowabunga!  We have a winner! 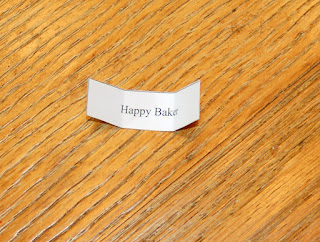 Happy Baker??  No way!!!
(Full disclosure:  Happy Baker is a personal friend of mine.)
Congratulations, Joyce!

"Wait a minute," Molly said.  "I picked two names.
You need to look at the second name."

"No," said Molly, "but need I remind you
that you have a number of ort bags?  She should get one.
It's The Molly Giveaway, after all.  I decree it!"

So, the other Finalist, the winner of an ort bag, is: 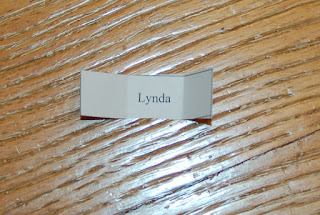 Lynda, whose blog is A Cozy Little Place for Stitching.
Congratulations!
Please email me with your address, Lynda,
so I can send out your ort bag!

More Disclosures:
Yes, small treats were put into the dish
to encourage our Giveaway Supervisor to pick a name.
No big black dogs were harmed during this procedure!

Thanks to everyone who entered
and regaled us all with stories about your animals!
This was fun!

The last thing Molly said I should do
to wrap up her giveaway
is show you photos of Those Who Went Before.
So, here they are: 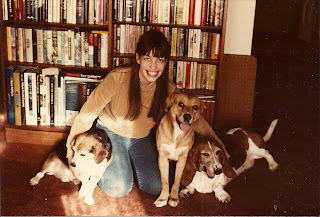 From the right, Maxine, our first dog, adopted as a 9-week-old
from a breeder-exhibitor.  She was not "show quality."
She was an only dog for six years, until I began volunteering at an animal shelter...
Then we adopted Moonshine, the zany yellow lab/staff,
my shadow, my baby, my favorite.  Look at those big, brown, saucer eyes!
On the left, Governor, was a senior citizen (10-12) when we adopted him.
We called him the world's oldest half-dead beagle,
but he lived out his last 4.5 years with us. 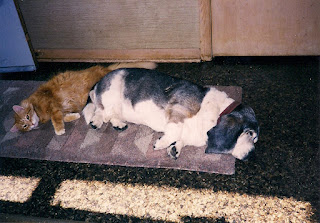 Here's Frazier, our 15-lb.Maine Coon cat who just loved dogs,
and Agnes, our second basset--both adopted from the shelter.
With four dogs and one cat, we were now one animal
over the max according to local ordinance.
My shelter volunteering had to come to an end.

Time passed, the original four died of age-related ailments,
and Agnes was left by herself and none too happy about it.
Enter Mandy, adopted from another local shelter in 1994,
one of the sweetest dogs I've ever known. 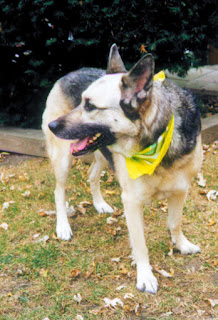 She had her ears back at the shelter and she looked a lot more like a mix.
Upon arrivng at our house, the ears went up and we realized we had ourselves
what appeared to be a purebred German Shepherd Dog--or very close.
Agnes (at 12 years of age) perked up the minute they were introduced.
They lived happily together for three years.

After Agnes left us at age 15, Mandy was very lonely. 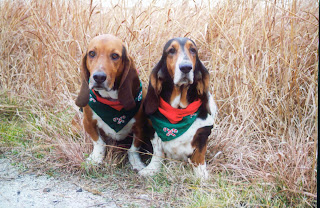 So we adopted Timmy, our third basset (left) to keep her company.
We adopted him from basset rescue and he had issues:
easily bored, very smart and big-time separation anxiety.
You can just imagine.
Timmy stories would be a blog unto themselves.
Timmy was a "breedist" (wasn't comfortable with breeds other than bassets),
so when Mandy left us (at only age 10 in 2003), we got another basset, Beulah (right).
She was Timmy's opposite:  easygoing, mellow and low maintenance.
He seemed to calm down (a little) after she arrived.

Timmy left us first (at age 12) in 2009, then Beulah became an only dog.
You may have noticed her photo in my sidebar--she's co-founder of this blog.
She stayed around just long enough to help me launch it,
then left us a month later at age 13.

We were dogless from February to September of last year.
I didn't know if I even wanted another dog.
Then I saw Molly's photo on the Internet,
and the rest is history.

If you've read this far and are still awake, you certainly have staying power!
Thanks for reading, and for visiting!
Posted by Southpaw Stitcher at 3:06 PM 11 comments:

September IHSW: A Finish and a Start

Hey Blog Buddies,
I've really had a blast reading all the comments about everyone's animals.  If you're wondering what I'm talking about, go to my giveaway post, and enter while you're there.  You've still got a week left to get a chance to win!

It wouldn't be an IHSW (International Hermit and Stitch Weekend) if I didn't finish something, right?  So to keep my streak going, I finished (and framed!) Secret Pumpkin Patch by The Trilogy: 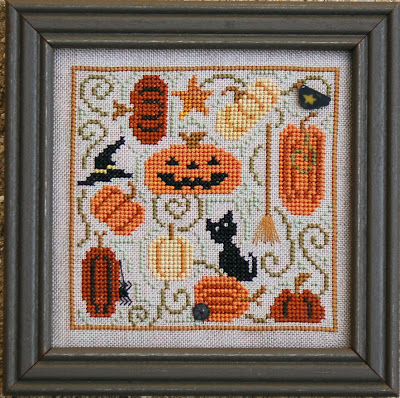 I visited Inspired Needle in Lemont, IL, earlier this week,
and found this perfect little weathered black frame!
So, I was able to frame the piece right away,
and it's now up on my shelf--
never mind that we're only halfway through September!
Framing a piece with a stitched border
that is very close to the frame is challenging,
but I did the best I could and it didn't turn out too bad.

After this small success,
I was inspired to try to finish Grandma's Roses
from the Nordic Needle retreat in April. 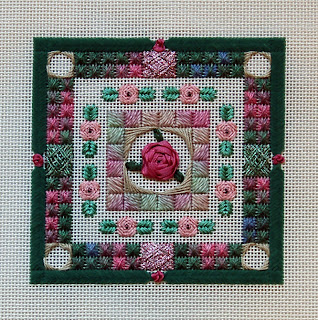 All it needs are some bullion knots
to make a rose in each corner.
Several months ago, moonsilk stitches was kind enough
to show me how to do bullion knots on canvas.
What she said seemed to make sense at the time,
but did I go right home and finish up the project?
Noooo.
When I picked it up yesterday too much time had passed
and I just couldn't figure it out,
so I put the piece away indefinitely--bummer!

To cheer myself up, I started a new piece:
Quaker Cardinal by The Workbasket.
(I'm kind of easy to cheer up...)
I've been itching to start this project for some time. 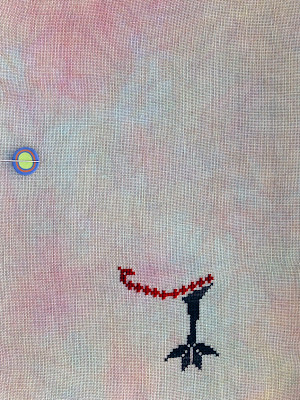 This photo simply does not do the fabric justice--
it's the prettiest fabric I've ever stitched on.
I won it (the fabric) as part of a giveaway hosted by Robin
at Threads of Memory.
Thank you again, Robin!
Since this photo was taken,
I have completed the other leg.

To see what my fellow hermitters
have been up to this weekend, click here.

Hope you had a fabulous weekend
with some time to stitch!
Thanks for visiting!
Posted by Southpaw Stitcher at 7:56 AM 18 comments:

Today is our dog Molly's Gotcha Day,
the first anniversary of the day we adopted her. 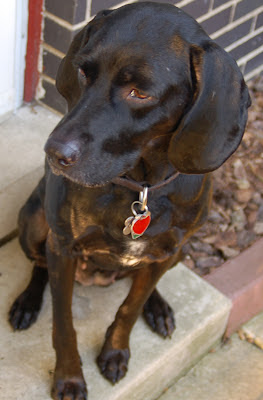 She's such a cutie, but I'm somewhat biased.
In honor of this special day, we're having a giveaway.
Uh, no, she isn't the giveaway!

It's a modest little giveaway.
If you're a reader of this blog, you'll recognize the charts... 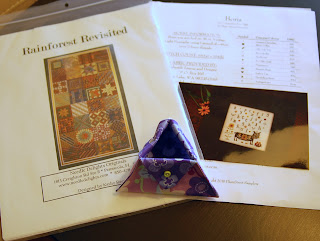 The chart for Needle Delights Originals' Rainforest Revisited,
the chart for Plum Street Sampler's Boris,
and one of my little ort bags, for good measure.

To get a chance to win,
just leave a comment on this post
and answer two questions:
How many, and what kinds of companion animals
have lived with you over the years?
Feel free to go into as much detail as you like.
If the answer is none, that's OK, too.

Deadline to enter is midnight, Chicago time,
on Sunday, September 23, 2012.
Molly and I will draw the winner's name the following day,
and post it on the blog.
Make sure you include a way for me to reach you. 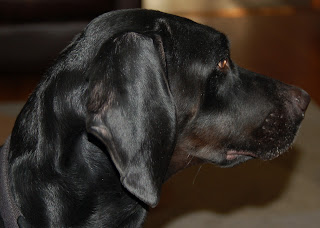 Molly is ready for her close-up!

She wishes you good luck
and thanks you for visiting!

Hey Blog Buddies,
Yesterday was the Big Day!  Our Guild brought Terri Bay down from Minnesota to teach us her Ukrainian Whitework Diamond Ornament.   To refresh your memory, here it is: 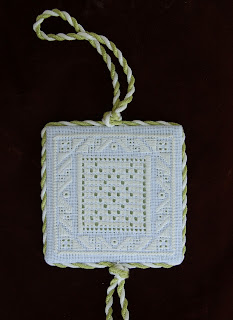 I still have to redo the cording on mine, but it's not in my list of top 10 things to do. 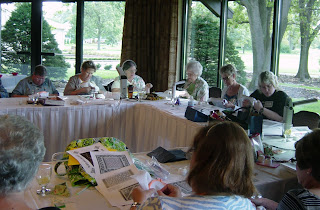 The venue, Briar Ridge Country Club, was beautiful--
lots of natural light.  There was a window wall behind the photographer, too. 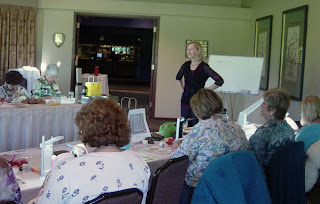 Terri is knowledgeable and fun,
and her charts and instructions are very detailed.

There was plenty to eat:  coffee, tea and Danish first thing,
soup and salad bar for lunch,
and giant cookies in the afternoon!
(Sorry, no food photos!)

Our Guild also made a little money back
from some handmade items and gift baskets
that were donated by members and raffled off.
(Yikes, I didn't get photos of those, either.)

At our request, Terri brought some
of her other charts to sell,
and displayed some of her beautiful work
for show and tell: 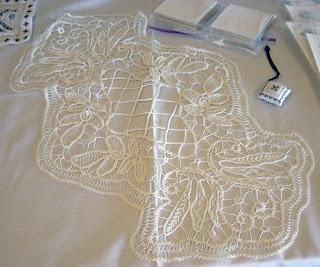 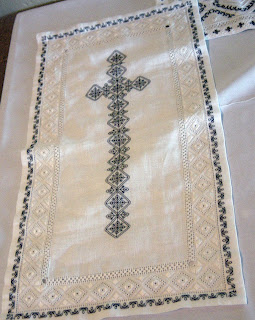 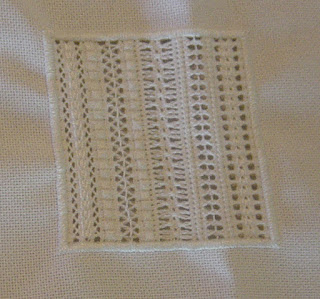 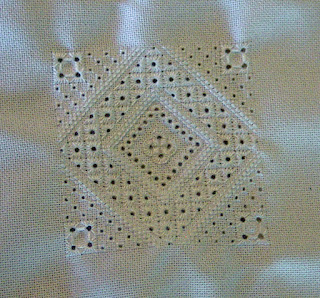 ...and who knew just eyelets and cable stitch
could be so gorgeous!

We had 27 sign-ups, only one no-show
and no major catastrophes.  Phew!

A big, big thanks to Terri for making our workshop so special,
and to everyone who attended and/or helped!
(You know who you are!)

Now I'm off to shred all my lists from last week
and spend some quality time
with my bottle of California jug wine.  ;)

Hope your weekend is going swimmingly.
Thanks for visiting!

Posted by Southpaw Stitcher at 10:24 AM 7 comments:

Derailed by a Pumpkin!

A few days ago, I was blog hopping and ran across a lovely Shepherd's Bush design, which got me to thinking...  Take Joy by Shepherd's Bush is on my WIPocalypse list--and it's a small design which would be easy to finish.  I even have the little box that goes with it!   It should definitely go into my rotation.  However, the kit (yes, it came in a kit with fabric and threads) did not make it into my to-be-worked-on WIPocalypse bin, so I had to go searching for it in the (ahem) larger bins.  So while I was pawing through all the goodies in the first bin I opened (I should have more of a handle on where everything is, shouldn't I?), I came across Secret Pumpkin Patch by The Trilogy--a cute little seasonal design. 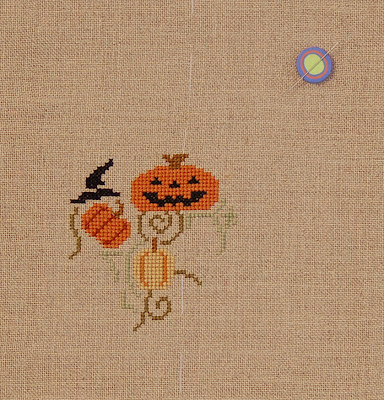 The design came with the fabric,
and I'm using DMC threads from my stash.

I haven't located Take Joy yet.
It wasn't in that first bin!

Hope you have a fun weekend!
Thanks for visiting!