A Taste of Honey

Within the past week or so I've had a few finishes,
and I've taken some other projects to the framer's,
so it's time for a little show and tell.


First up, my two(?) or three-year project,
Prairie Schooler's Alphabet.
These letters always seem to take more time
than I think they should. 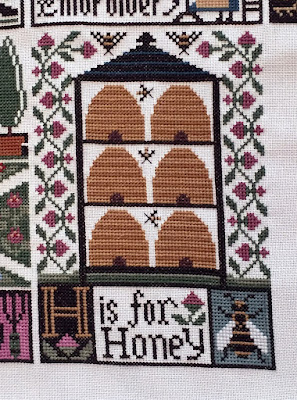 H has not been my favorite letter thus far
because it was a little repetitive.
On the other hand, once I stitched
one of the bee skeps, or got started
on the flowering vines, I was able to use
what I had just stitched as the chart!

The H is also one of those problem letters
for those of us stitching this project as
one gigantic sampler.
Most of the letters are a uniform size
(70 x 100 stitches).
The H is larger, so I had to make the buds
opposite each flower smaller, and
chop off the ends of the bees' wings
on the top of the piece
in order to make it the
same size as the other letters. 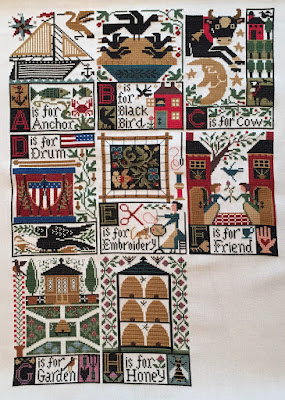 I think the whole piece,
even though it's obviously unfinished,
looks so much more impressive
than the individual letters.

I'm putting this project on hiatus for a while.
I have to make some progress
on my chapter's challenge piece,
Kay Stanis' Copper Illumination.
Wish me luck.

Next is my blackwork project,
Blackwork Journey's Wandering Star. 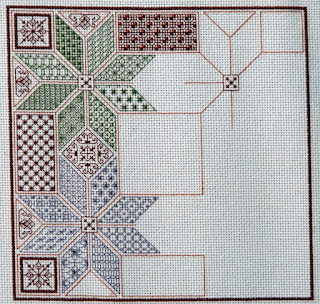 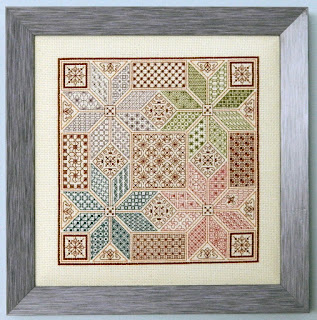 Here it is finished and framed.
It's hard to tell from the photo,
but I chose a light purple frame
to try to bring out the purple quadrant
in the upper left.
I'm a little disappointed in the result,
but it is what it is.

Next up is Hands On Designs'
Underwater Basketweave. 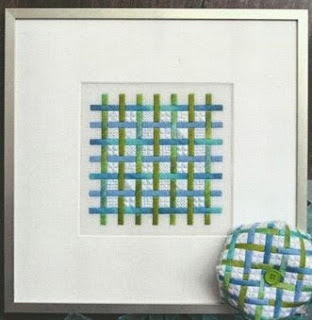 This is what the model looks like.
It was my ANG chapter's February class. 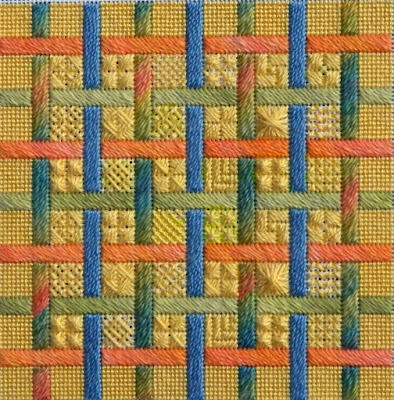 I decided I wanted a sunnier colorway.
This was a fast and fun piece.
This will be finished either as a box top
or a small picture.
It's only about 5" x 5".

Speaking of small,
you've already seen
Permin's Two Horses on this blog,
but now it's framed. 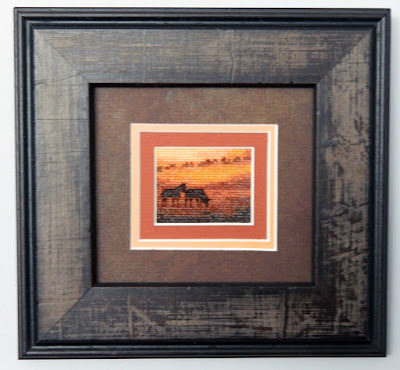 The whole piece, including the frame,
is only about 6.7" by 7.2"
DH thinks the top (brown) mat
makes everything look too dark,
but the stitchers at my Guild said "No way."
What do you think?
The lighting has washed out the piece just a little.
It's somewhat darker all around IRL.

Finally, I have a new start to show you. 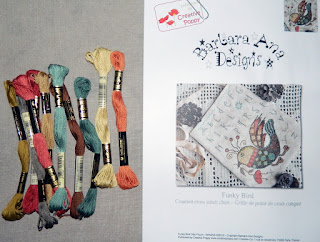 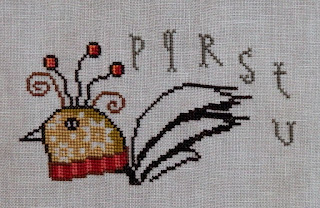 Well, that's it from here.
Hope your March is going well.
Thanks, as always, for visiting.
Posted by Southpaw Stitcher at 2:56 PM 9 comments: