Hope you all had a groovy July weekend.  Well, another IHSW (International Hermit and Stitch Weekend) has come and gone.  I didn't get that much stitching in Friday through Sunday for various reasons, but I "cheated" and made up for it this morning.  However, I'm sure that Joyce at Random Ramblings will forgive me.  (heheh) 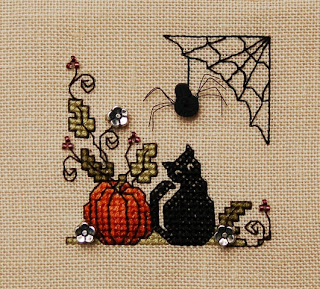 First up is the ornament for the
Halloween 2013 SAL.
This month's theme was bats/spiders,
so I chose Sweetheart Tree's
Itty Bitty Kitty - Halloween design.
The design is very small, and it's a good thing
because there were quite a few
quarter stitches and backstitching.
You'll notice it's not ornamentified yet.
I was definitely not in the mood to do that,
but it needs to get done before I start
the August ornament.
Then I decided to dust off my canvaswork pumpkin--
it's been on hiatus since shortly after the workshop.

Here is another case of the photo
not even coming close to doing the piece justice.
It's hard to make out the sparkly orange Treasure Braid,
the olive green Burmilana wool
and the burgundy Petite Very Velvet threads,
but they're there, and this little section
looks fantastic in real life.
It's right at the tip of the middle "football."
There are five adjoining football shapes which,
when finish-finished, will make up
a 3-dimensional pumpkin.
I'll be working on this piece all week,
so stay tuned for a more detailed update on the whole thing.
That's it for now.
Click on over to Random Ramblings to see
what the other hermitters were up to this weekend.
Thanks for organizing this, Joyce!
And thank you for visiting
and leaving your kind comments!
Posted by Southpaw Stitcher at 11:50 AM 16 comments:

I started a project a little over two weeks ago, and instead of stopping after a week and putting it in the rotation, I was having so much fun that I stitched right through, seeing what it was like to be a one-at-a-time stitcher again.  The name of the project is in the title of this post, but was it the butterfly that initially caught my eye?  No!  It was the...

There is an alphabet... 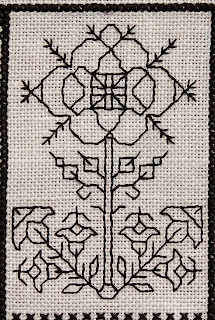 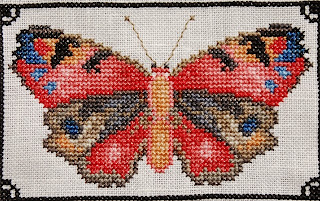 At last, the butterfly!
This photo doesn't really do the colors justice.
There was a bit of confetti stitching,
but not enough to make me take a breather. 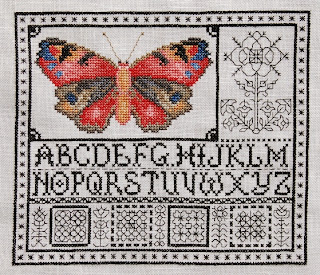 Rosewood Manor's Rose Watercolor Butterfly
stitched on a random piece of off-white 32-ct. linen
with the called-for DMC floss.
I really like the way this turned out.
You just don't expect to see a brightly-colored butterfly
in a blackwork piece!
Some of you may remember
the Prairie Schooler June blackbird that
I stitched up in June.

Well, it didn't get finish-finished until this month! 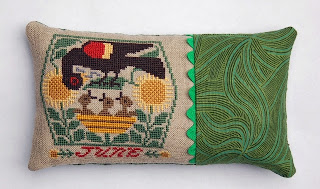 I guess it's not bad for a first try at this kind of finish.
I stuffed it with rice--in the past I've used only fiberfill.
I wasn't happy with the points of the ric rac sticking up,
but I'm trying to overlook that.
And the whole piece just looks sort of crooked!
I didn't find this easy to do,
but that's because I really don't sew much.
I'm just relieved that it's finally done.
I'm planning on doing the August one,
and I have no idea how I'll finish that!
Maybe I'll treat myself and have it outsourced!
That's it for now.
Hope you are enjoying your July!
Thanks for visiting!

Happy July!  Yikes, the year is now officially half over!!

I've been fairly busy stitch-wise this week, and have gotten a few small projects completed.  Let's get the photos up: 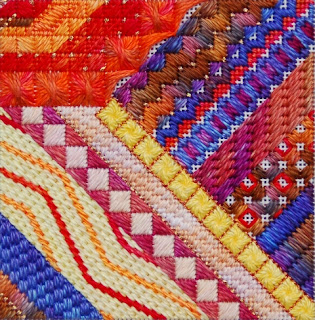 I may not have finished this project
but I did finish stitching the first square of
Needle Delights Originals' Tangerine Twist.
The canvas that you see showing through on the right
will be covered by Little Charmers orange beads,
which are waiting for me at my LNS.
The beads are a variety of sizes,
and should add a lot to this already eye-popping square.
Obviously, the beads will go on
after all the squares are stitched.
Here's a funny story.
When I was stitching on this last Monday,
I was so in the groove that I kept putting off
eating dinner--the "just one more row" mentality.
I vaguely noticed that it was getting very dark outside--
too dark for early evening.
We've had a lot of storms come through here just lately,
so I was unconcerned.  Just more rain.
Little did I know that we were going to get hit with a derecho!
(According to Wikipedia, a derecho is
a widespread, long-lived, straight-line wind storm that is
associated with a land-based,
fast-moving band of severe thunderstorms.)
When our lights started flickering,
it got my attention fast.
I ran upstairs to put my leftovers from lunch
into the microwave, but I was about a minute too late.
Pouf!  Power out until 10:30 p.m.
Had to make dinner on the gas stove,
and my stitching was on hold until the next day.
There were lots of branches down,
but no damage to our house.
Lots of people had it far worse.
The next little project is my
June ornament for the 2013 Halloween SAL.
The theme for the month was mummies/tombs. 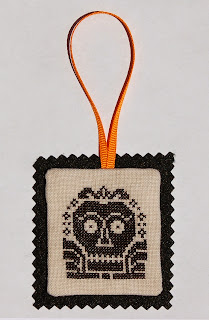 This is one the headstones from Prairie Schooler's Heads Up leaflet:
stitched on 40-count Heritage linen
(I purchased a large piece of that last year!),
using one strand of Gloriana India Ink
over two threads.
I was on a roll this weekend,
so I also started and finished this... 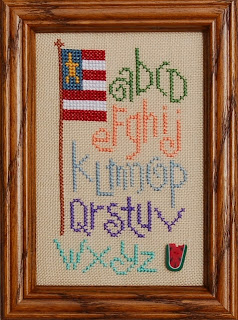 Lizzie*Kate's Summer ABCs,
stitched on 28-count light mocha linen.
I changed the colors on the lettering because
I wanted to make it look a little more "beachy,"
but used the recommended JABC watermelon button.
Last but not least,
I started and finished a charity project for one of my guilds. 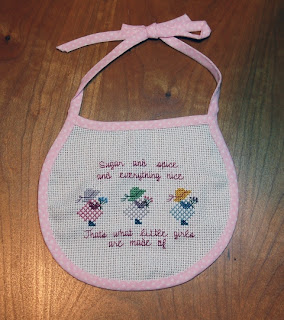 We are donating a bunch of bibs to PASS,
an organization which assists young single moms.
The incredible part about this finish is
I don't even have to turn it in until the middle of September!!
It's unheard-of for me to be so early!
I think this calls for a new start, don't you?
That's it from here.
Hope your weekend was fun,
with a little stitchy time thrown in!
Thanks, as always, for visiting!
Posted by Southpaw Stitcher at 7:42 AM 8 comments: