Harper, that is.  In case you're not familiar with him, Charley Harper was an American Modernist artist, best known for his highly stylized wildlife prints.  Luckily for me, many of those prints are available as painted needlepoint canvases, and I have two of them.  I have a finish on my first one... 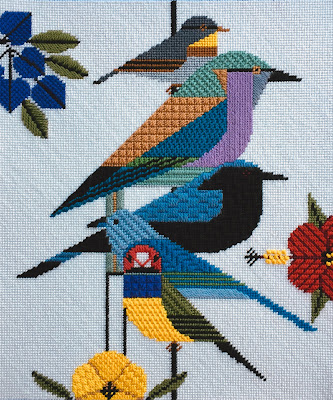 This is called Rainforest Birds.  Painted canvases alone can be quite pricey.  I saved a little money by doing this piece almost entirely in DMC #3 Pearl Cotton, which I like to work with.  Some needlepointers may look down their noses at that, but I don't care.   Rainbow Gallery specialty threads can add a lot to the cost, and there are a few of them that I avoid like the plague (or should I say Covid-19, hah!), such as Neon Rays, a rayon ribbon. I did the eyes in black #12 Kreinik, but the sparkle doesn't show up on the photos.

Here are some close-ups: 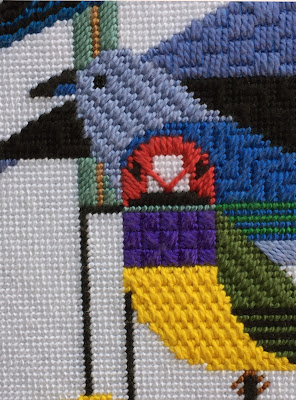 Some canvases have stitch guides, but if this one did, I wasn't aware of it, so I wound up choosing which stitches to use.  At first, it was a very daunting task, but I had a little book called "Stitches to Go" by Suzanne Howren and Beth Robertson that has diagrams for hundreds of stitches.  I relied on it a lot. 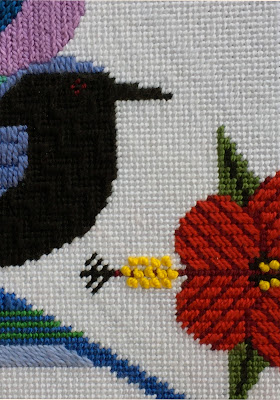 I decided to do a different stitch for each color.  In retrospect, that may have been overkill.  I did the background all in basketweave.  A lot of needlepointers avoid basketweave because it takes a long time to stitch and can be boring, but I view it as zen.  When I couldn't decide on a stitch to use, I did a bunch of basketweave, a no-brainer.  That worked out well because once I was done with the birds and flowers, I had only a little corner of basketweave to finish. 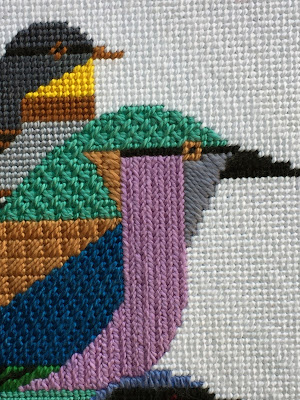 Some of the stitches I used were:  brick, byzantine, milanese,  French knots, jacquard, diagonal mosaic, scotch, reverse scotch, kalem, nobuko and serendipity.  Don't you love those names!  I did the little guy at the top in basketweave because he was so small and far in the background, and probably because I didn't want to make any more stitch decisions, if I'm being honest.

Well, that's it from here.
Thanks for listening to my blatherings.
And thanks for visiting!
Posted by Southpaw Stitcher at 12:45 PM 5 comments: