Last week my friend Joyce and I took a road trip to Bloomington, Minnesota, near the Twin Cities to attend the EGA Heartland Regional Seminar hosted by the St. Paul Needleworkers chapter.  We were able to take only one 2-day class, so we chose the blackwork class being taught by Marion Scoular--and we're glad we did.

About a month ago, we received our 28-count Lugana fabric in the mail, with the outline of the design already drawn on (thanks for that, Marion!).  All we were asked to do was damp press the fabric (if we so desired), mount it on our frame of choice, and bring our own threads and colors to stitch with.  She assured us in her accompanying note that we wouldn't be bored in her class (I certainly wasn't), that we would get hooked on blackwork (as most of you know, I already was), and that every student's piece would be quite different from all the others.  I was a little skeptical about that last claim.  I thought that everyone's would be a different color, of course, but that we would just copy what she had stitched.

When the class started, we were given a wide variety of blackwork patterns from which to choose.  Here are some models that Marion brought with her.  As you can see, each is really different from the others--there was a fourth piece that had just every other section stitched, but I didn't get a good photo of it.  She didn't tell us which specific blackwork patterns she used, these are merely for inspiration. 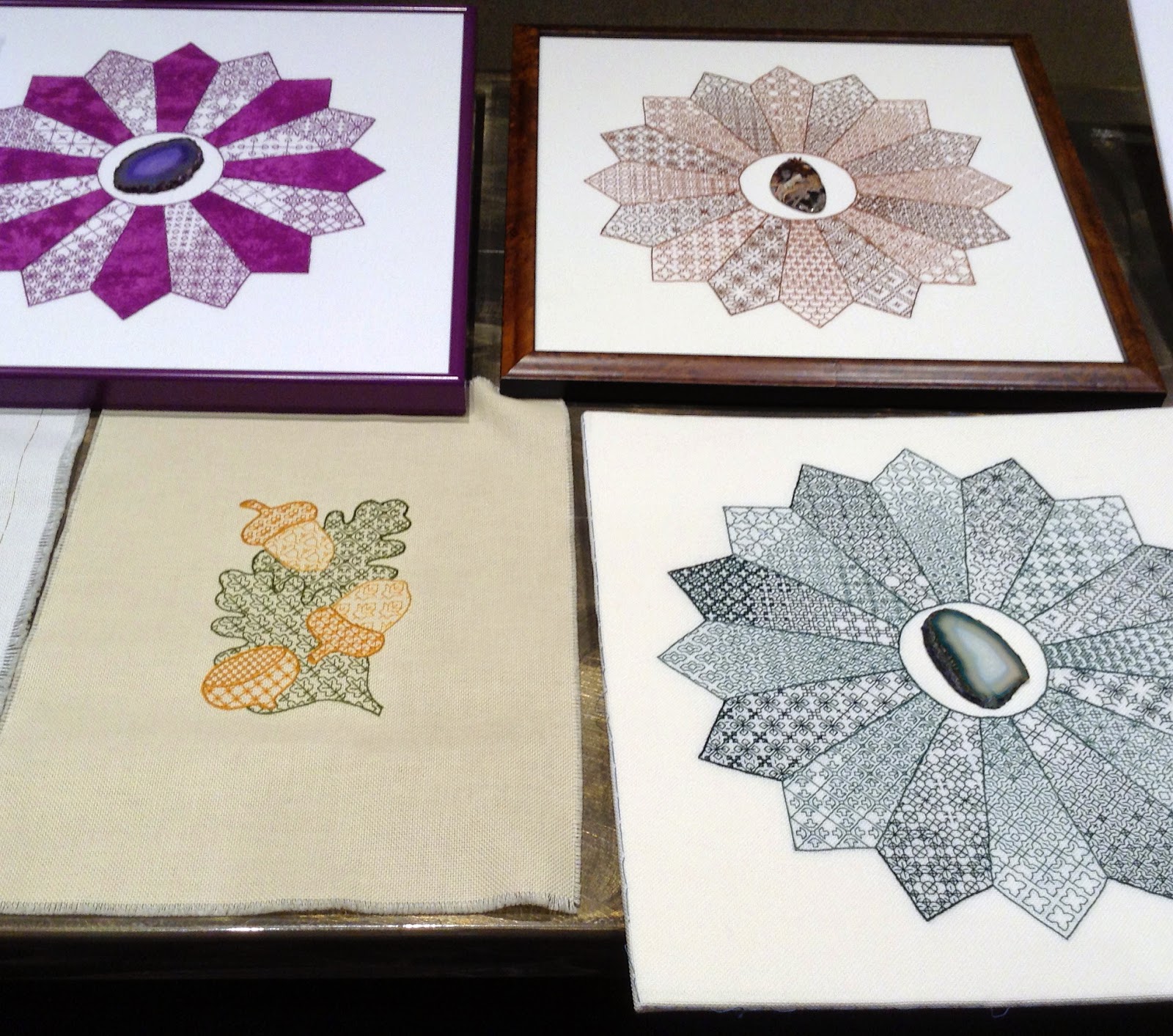 We are doing the Dresden design that you see on top and on the lower right.  The piece on the lower right has half the sections shaded dark to light from the center outward, and the other sections are shaded the opposite.  I'm not going to get quite that fancy with mine. 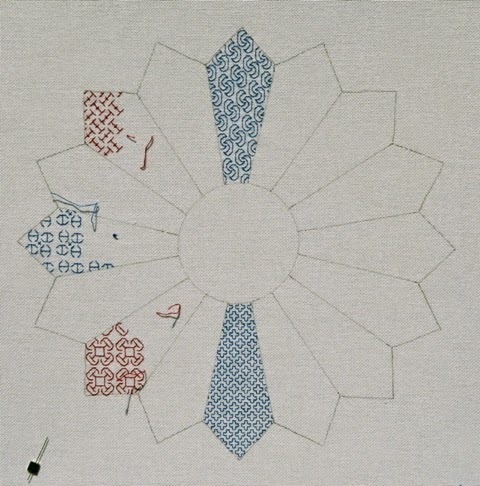 Here is my start.  I'm planning to stitch only every other section, using a red and blue color scheme, and the Lugana really is white.  Marion gave us some clever blackwork patterns that are actually letters, if you look hard enough.  Starting with the section in the southwest corner, the pattern will spell C H I C A G O.  Can you see the first four letters?  The stitched sections will be shaded and outlined, but only after we get all the base patterns stitched, per Marion's instructions.  I made my task a little bit more challenging because all of her patterns have suggestions for shading, except for the "letter" patterns, so I'm on my own with that.  Chicago's flag is blue, white and red--I may depict it in the middle in some way.  No one in the class is doing anything like this piece, probably for good reason, so she was right about each piece being totally different, too. 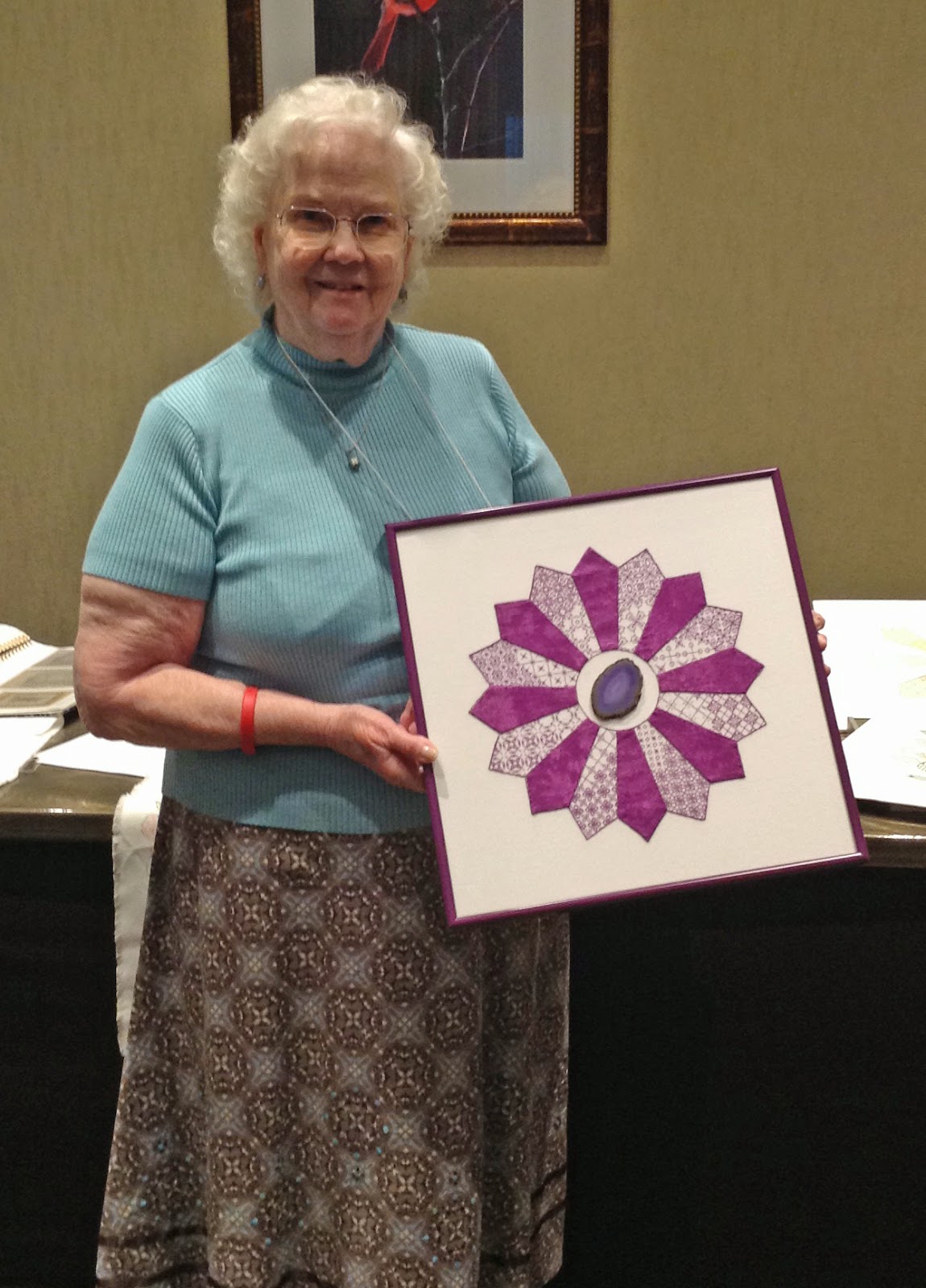 Here is the Divine Ms. Scoular her very self.
She is a graduate of the
Royal School of Needlework,
but is surprisingly relaxed about reversibility,
what types of stitches to use on the outline,
mixing double running, back stitch
or a combination thereof within each section,
and even knots on the back of your work!
She teaches other techniques,
such as hardanger and hemstitching, too.
If you ever have an opportunity
to take a class from her, go for it!

That's all for now.
Thanks for visiting!
Posted by Southpaw Stitcher at 6:47 PM 11 comments:

We had some very severe weather in northern Illinois yesterday.  A little town northwest of Chicago was totally destroyed by a violent tornado.  At least one person died and several people were injured.  My thoughts go out to those families.  In our area, fortunately, all we got was rain.

Stitch-wise, it's Turtle Trot time once again.  For those of you not familiar with this virtual SAL, we all picked ten WIPs in January to work on, and we post before and after progress pics on the 10th of each month.

Despite the classes, workshop and new starts that happened in the last month, I did get some time to work on a few of my TT pieces.  I have to start out with Ink Circles' 99: 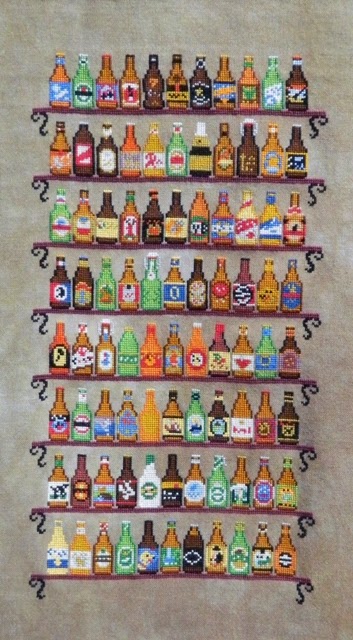 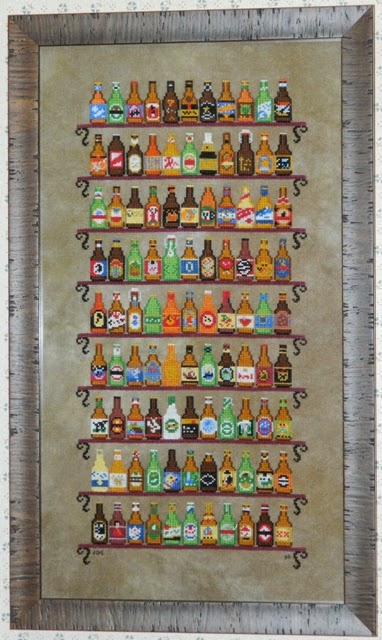 Regular readers of this blog know that I finished this piece a couple of weeks ago.  Here it is framed, but I'm afraid that my framer and I did not do a good job on this one.  She will usually let me know if she thinks that something I pick out does not work.  The piece just looks like a dark brown blob on the wall.  The frame is dark brown but appears much lighter in the photo than in real life because it's reflecting the flash.  I think the reflection of the glass (yes, there is glass there) is contributing to not being able to see the stitching, too.  My plan is to first remove the glass, then if that doesn't work, I will go to a lighter-colored frame.  Gold maybe?  I didn't choose to mat it because the piece is large and I don't have all that much wall space, but a light-colored mat would probably have done the trick, too.  (Just a tip for those of you stitching this piece on the "ale" linen.)

Next, I wanted to stitch something that I hadn't worked on for a while, so I chose Laura J. Perin's Nordic Panel. 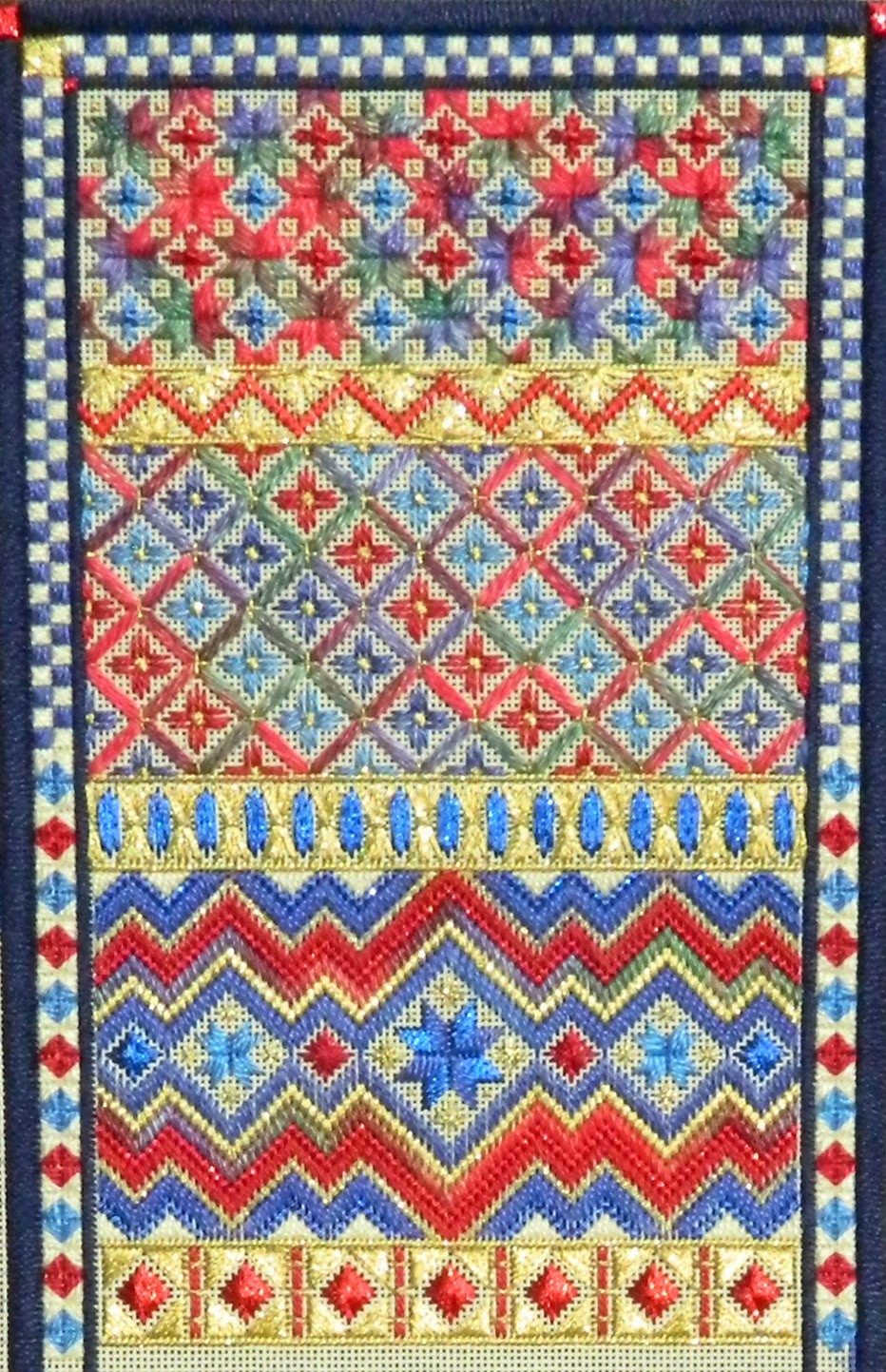 This is where I left off in February.

I did the next band
and extended the borders
almost all the way down.
I have a love-hate relationship with this piece.

Here's a close-up of the band I stitched.

Next up is Needle Delights Originals' Summer Logs: 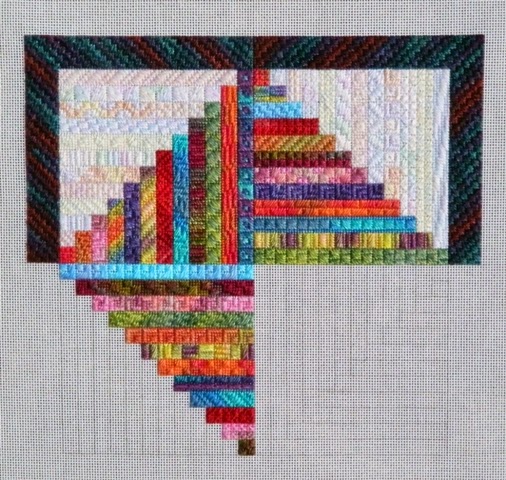 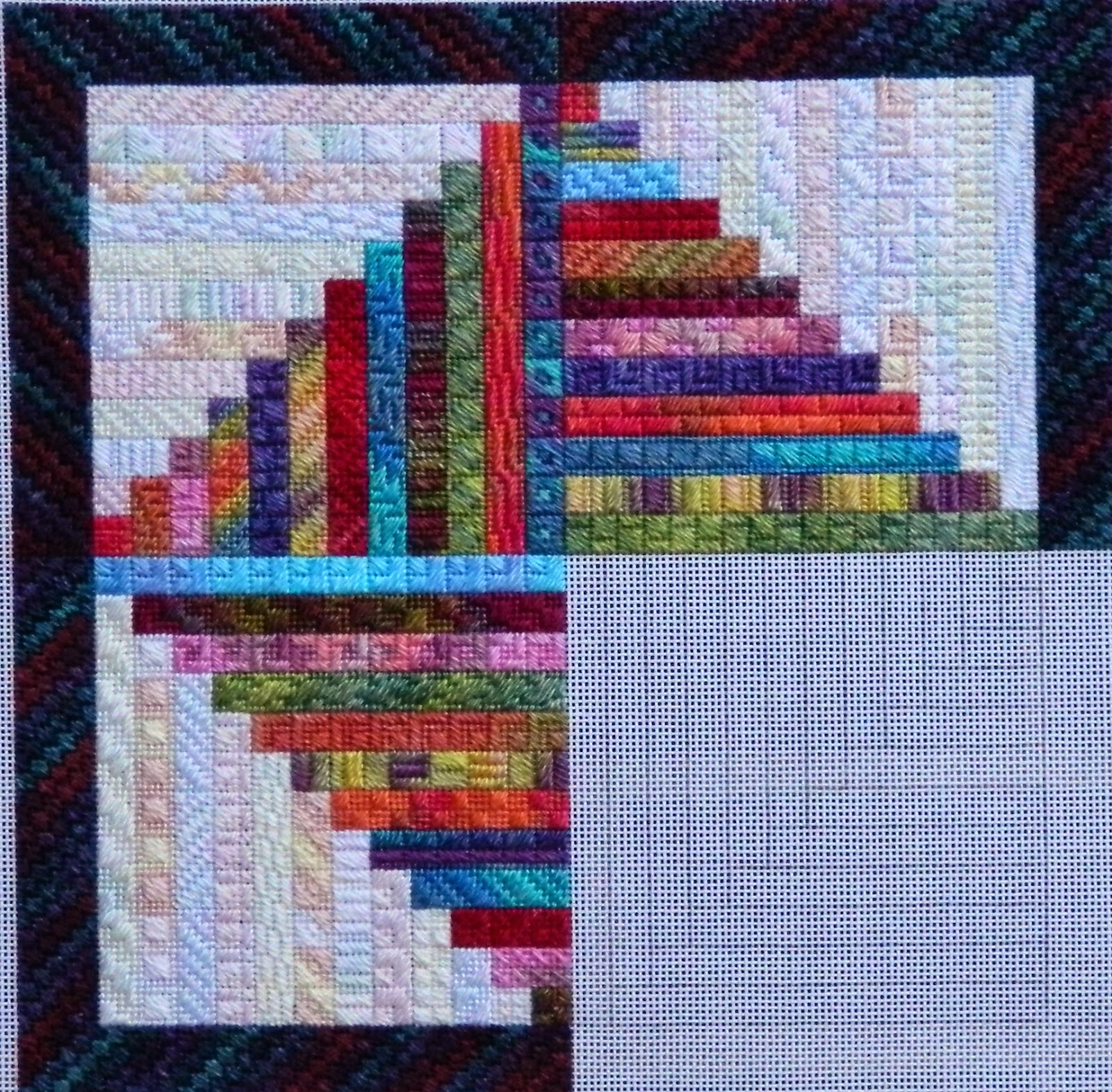 ...and this month.  This piece is just so much fun to stitch!  It has no metallics, ribbons or anything to be laid.  No open canvas where you need to avoid carrying threads.  Even the border is simply a two-row repeat and is very zen.  But all the different stitches do make it look textured and interesting.  I think I'm going to be a little sad when this one is finished.

Lastly, I chose another piece I hadn't worked on in a couple of months (and because July is just around the corner!), Plum Street Samplers' Liberty Inn: 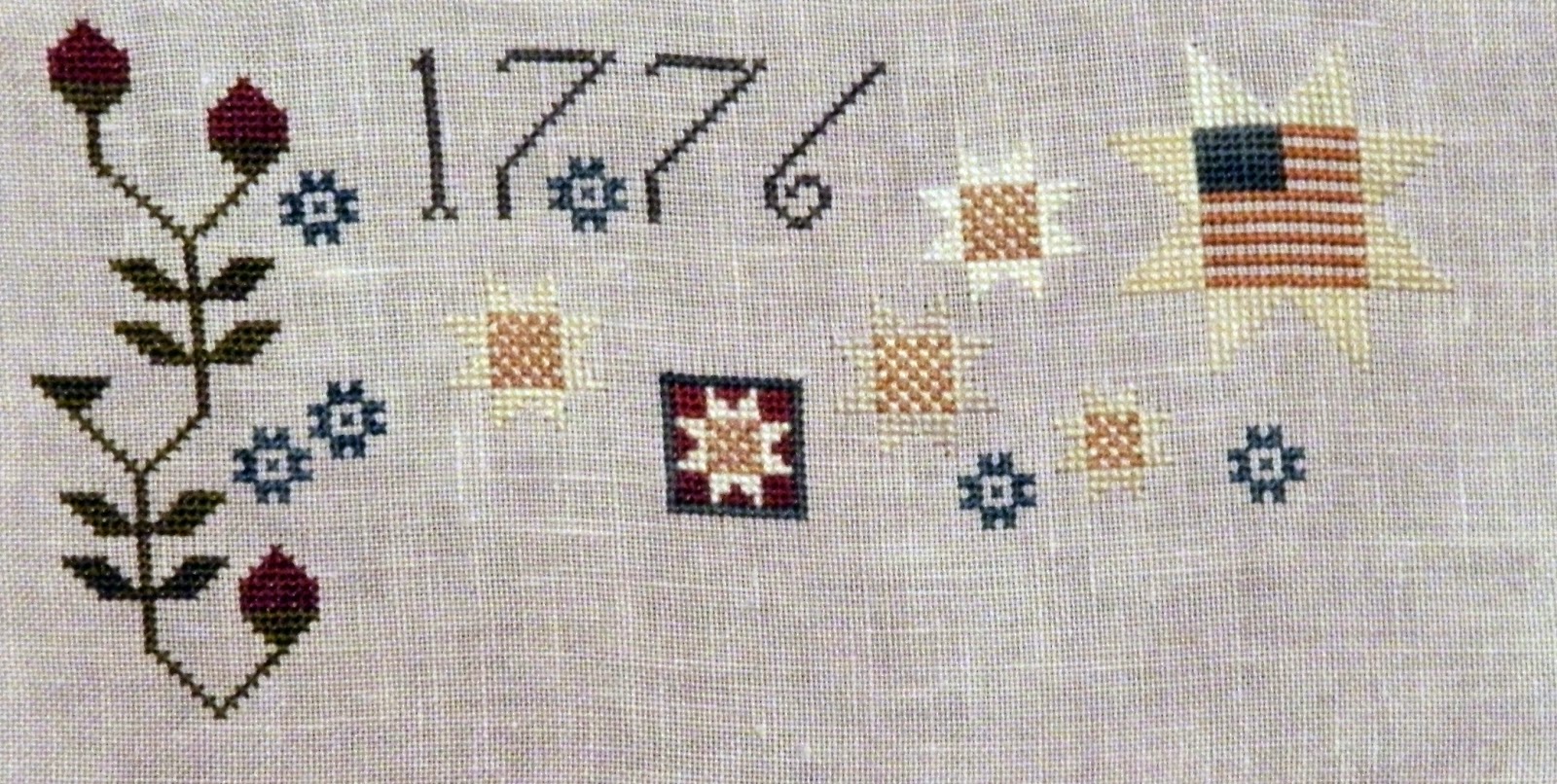 Here's where I left off in February...

...and what it looks like now.
The lighting isn't the greatest in this photo--
as I mentioned before, it was very stormy yesterday--
and the piece looks much prettier in real life.
Once I uploaded the photo to my computer
and finished cropping, etc., I noticed
that two small motifs have one stitch missing!
(That has already been rectified.)
I like this piece so much,
once it's finished I may leave it up all year,
not just in the summer.

Well, that's it from here.
To see what the other Trotters have been up to,
go to the BAP Attack blog.
Hope you all have a wonderful weekend.
Thanks so much for dropping by!
Posted by Southpaw Stitcher at 11:10 AM 13 comments: