Hope you all had a marvy holiday.  Ours was very enjoyable.  I got some time to stitch on my new start over the past week, and the theme was: 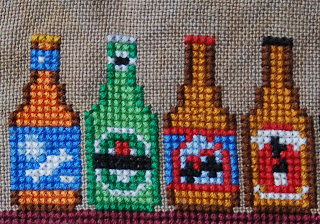 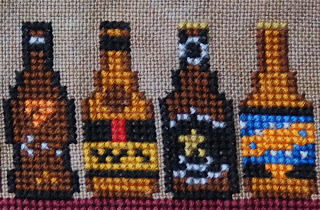 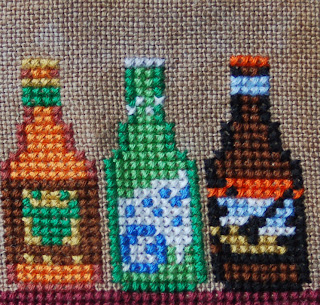 Yes, of course, I'm working on Ink Circles' 99.
The top shelf is done: 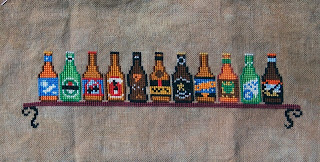 So it's 11 down and 88 to go!
The bottles are cute and colorful,
and I love the way they pop
against the Ale linen.
I'm thinking that this is one project
that DH will be inquiring about.  A lot.
I finish-finished a Christmas ornament, too,
but the recipient has not yet seen it,
so that will be a reveal in the new year.
I'm close to finishing LHN's Warm Winter Woolens,
and hope to get it done before year-end.
As for my 2013 goals, I had an overly ambitious list--
I knew that going in--but did manage 45 finishes.
The majority of them were small:
ornaments, seasonal smalls and such,
but I finished one or two larger projects as well.
If you're interested in photos,
just pop over to my 2013 Goals page,
the link for which is at the top of the blog.
Since I have a frightful amount of
projects all kitted up but not started
(they scare me every time I look at them),
I'm making a serious effort to buy
no new charts and very few threads/linen in 2014!
Can I do it?  Time will tell.
I've joined the Stitch from Stash SAL hosted by
Mel at Epic Stitching
which should help to keep me focused.
Sign-ups end on January 2nd.
Of course, there's the little matter of the
four workshops that I've signed up for in 2014!
But according to the Stitch from Stash rules,
they don't count if you keep stitching on the pieces
during the year.  Alrighty then!
Of course, I haven't forgotten my WIPs,
so just for fun I've joined the
2014 Turtle Trot SAL hosted by Claudette at BAP Attack.
Each participant picks 10 WIPs that he or she
wants to make progress on during the year,
and posts regular updates.
Many of mine are projects that
regular readers of this blog have seen in 2013,
but I'll also be trotting out (heheh)
some Oldies but Goodies, too.
That's it from here.
Have a fun and safe New Year's celebration,
and I'll see you all on the other side.
Thanks for visiting!
﻿
Posted by Southpaw Stitcher at 7:30 AM 7 comments:

To all my Blog Buddies 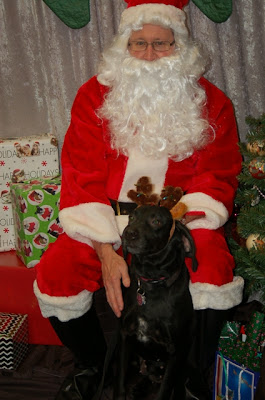 Are you all ready for Christmas?  I am, finally, so I was able to devote a little time to stitching this past weekend.  Winter Logs got a little love.  Here is the before photo: 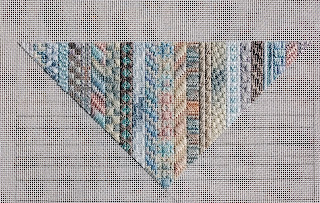 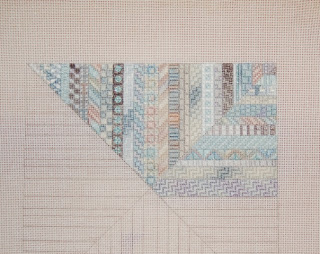 (indoor photo w/flash because of nasty weather)
I'm now caught up with this phase of the SAL.
Next, I worked on a "new" piece that I started this week.
I was pawing through my stash
and found a seasonal chart that I forgot I had
which had been gifted to me from my friend Anne (no blog).
Here is LHN's Warm Winter Woolens: 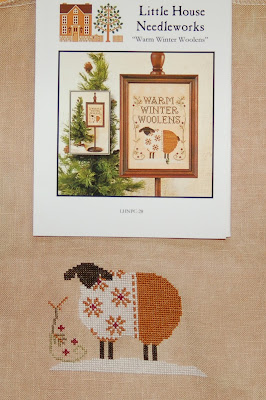 After having stitched my last Halloween ornament
on 40-count linen, I was looking forward to
working on a lower count.
The directions called for
Lakeside Linens Vintage Exemplar
and I was happy because I knew I had that fabric.
Surprise:  40-count!  oh well...
It's turning out well--I really like that sheepie!
No, I didn't do all of the above stitching this weekend!
I had had a good start on both pieces
and wound up working a little on both
on Saturday and Sunday.
And last night I started (cough) another new piece from stash.
I'll show you that when I have a little more done on it.
That's it from here.
Check out what the other Hermitters did
by clicking here.
Thanks for visiting!
Posted by Southpaw Stitcher at 9:09 AM 7 comments:

Oh, the Weather Outside is Frightful...

Yes, the weather outside is frightful.  Yesterday we got about six inches of snow, and today it's very cold and windy.  And we're right smack dab in the middle of December, snow and cold, Christmas, the Winter Solstice -- and what am I doing?

Yes, that's right, I still had one more ornament to do for the 2013 Halloween Ornament SAL... 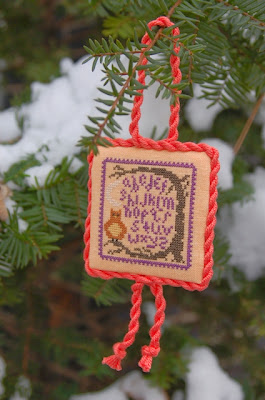 I'm surprised the photo turned out --
it was so windy, the branch and ornament
were bobbing up and down.
Yes, the Nut was out without a coat,
taking photos of a Halloween ornament
in the snow and cold.
Here is the "Official Portrait"... 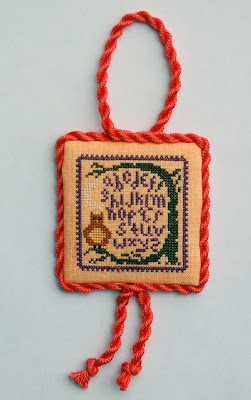 This is Knotted Tree NeedleArt's Little Owl Sampler
from the 2012 Just Cross Stitch Halloween Issue.
I had purple and orange #5 pearl cotton for the cording.
I asked DH the question:
Purple, orange, or both?
He said to go with solid orange, and I'm glad I did.
It brightens up the whole piece.
Stitchers are The Most Generous People
A little while ago I won Anne's giveaway at
Doll's Musings.
It was her Third Blogoversary,
and she offered to stitch three small pieces,
for three different people.
The winners got to pick out their prizes
from an assortment of patterns selected by Anne.
I chose a Prairie Schooler fall pattern,
a crow on a pumpkin. 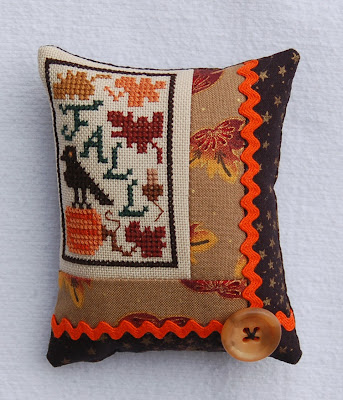 How cute is that?!!
I just love the way she finished it!
But that's not all... 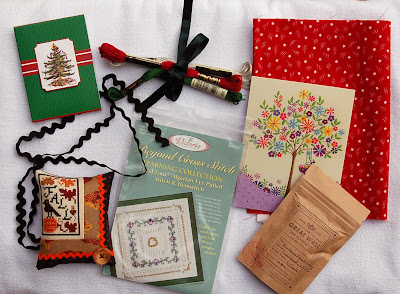 These items were also in the envelope,
clockwise from top left:
small note pad, 3 skeins of floss, cute piece
of red-and-white fabric, lovely card,
Russian Earl Grey tea, cute hemstitch/eyelet piece
from Victoria Sampler, her stitched piece,
and a length of black rick rack.
This did not make the above photo: 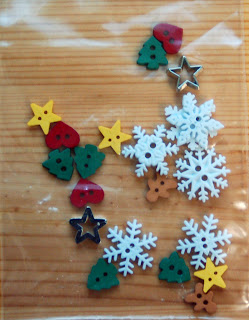 A packet of the cutest seasonal buttons.
I was just about to go out searching
for snowflake buttons when her package came.
Thanks again, Anne!
Stitch from Stash 2014
It's the end of the year,
and the new 2014 virtual Stitch Alongs
are now gearing up on various blogs.
(No more Halloween ornaments for me next year!)
What I haven't mentioned here is
that I went on a new stash diet in the middle of October
(two months and counting).
I had told certain of my stitching buddies
that as of January 1st, all bets were off, but...
Mel at Epic Stitching is hosting Stitch from Stash,
and it sounds like it will be right up my alley.
If it sounds interesting to you,
click here to check it out.
That's it from here.
Hope you had a great weekend.
Thanks, as always, for visiting!

If you've been reading this blog for a while and have a good memory, you might recall that I stitched Plum Street Sampler's Hare's Christmas during last year's holiday season. I finished it right at the end of December 2012... 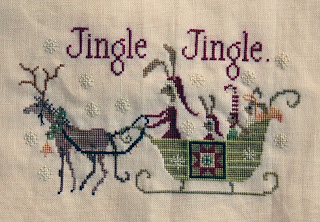 ...so there was absolutely no reason to
finish-finish it immediately, right?
It languished in my to-be-finished pile
all year long--until yesterday.
I was procrastinating because
I wanted to finish it as a pillow with ball fringe,
a technique that I had never done before,
and had no clue how to attempt.
I searched the Internet and found this tutorial,
and decided to give the finishing a try.
(I was on the verge of
outsourcing the finishing up until that point.)
I really had no expectation of a good outcome
since this was my very first time doing ball fringe,
but I followed all the instructions,
including using the zipper foot on my machine
and, of course:  pin, pin, pin
and voila.. 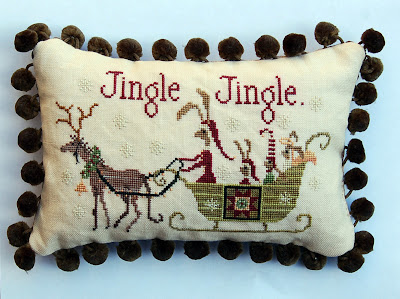 I'm pretty happy (and relieved)
with the way it turned out.
Even DH pronounced it "cute."
If I can do this, anyone can!
But I couldn't have done it without that tutorial.
I used crushed walnut shells as a stuffing.
They can be found at pet supply stores
here in the United States.
The crushed shells are very fine, so I  thought it best
to sew a muslin lining into the pillow, too.
(Another first, a lined pillow!)
That's it from here.
(Still haven't finished
all my Christmas stitching,
have you?)
Thanks for visiting.
Posted by Southpaw Stitcher at 10:41 PM 11 comments:

My EGA Chapter had its annual Christmas party this week, and we had an ornament exchange.  This is the ornament I brought:

This is one of the Lizzie*Kate Jingles designs,
stitched on 36-count natural linen.
Here is the ornament which I received,
stitched by Barb: 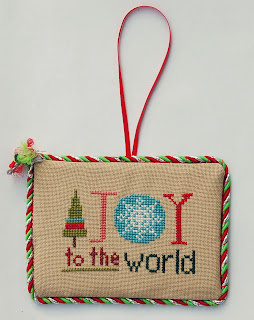 There has been some further progress
on Cool Cardinal: 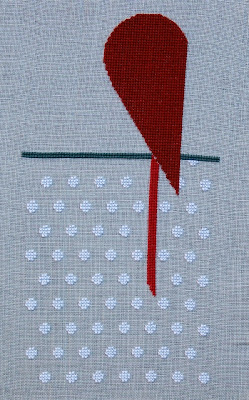 You can see that I've gotten the
white sorted out.
Don't worry:  the bird is supposed to be
two shades of red!
Last but not least,
I received this great prize from Jo
of Serendipitous Stitching
for winning her
Awesome Autumn giveaway: 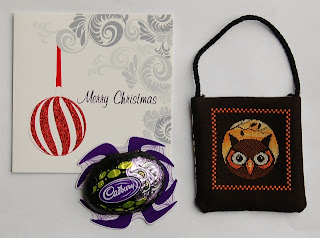 The bag itself is awesome
because everything except the border
is stitched over one.
On black.
And there was a delicious chocolate spider
tucked inside.
Thanks, Jo, I love it!
That's it from here.
Hope you have all your
holiday stitching done.
(I don't.)
And thanks, as always, for visiting!
Posted by Southpaw Stitcher at 6:26 PM 6 comments: