Anyone who identifies herself (or himself) as a stitcher can tell you that losing yourself in a stitching project is very therapeutic.  I decided to tackle the hardanger bookmarks from Nordic Needle to see if I could catch up before the March bookmark arrived, and I did! 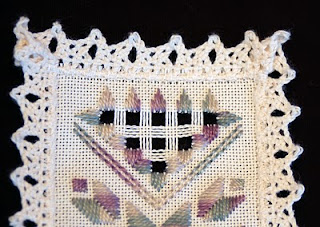 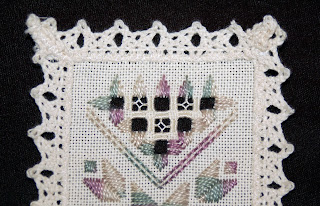 The top photo shows one of the end designs after cutting and removing the threads, and the bottom shows the finished woven bars and dove's eyes. 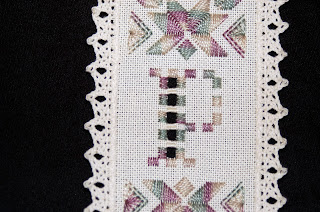 The initial in the middle.  I cheated and did not add the picots on either side of the woven bars.  Picots are my least favorite thing to make. 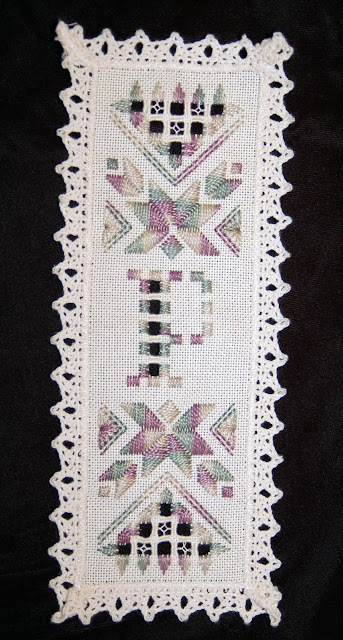 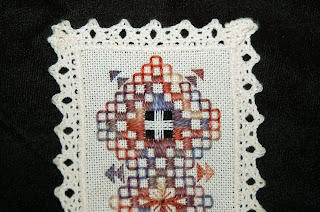 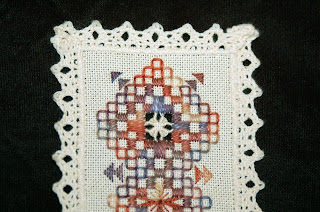 Before and after photos of the adjoining wrap.  This is the first time I had done that particular decorative stitch.  That's a good thing, because it is getting me out of my comfort zone of woven bars and dove's eyes. 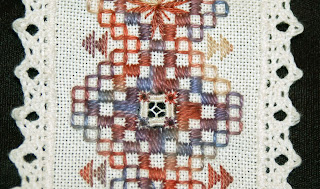 Needless to say, I was pleasantly surprised to find the middle filling stitch was woven bars and a dove's eye, with eyelets at the corners.

﻿The kit came with a skein of Caron Wildflowers in Teak.  I decided I wanted a little more coverage, so I used one strand of Watercolours for the klosters and the box stitch.  It was a little chunky, probably not recommended for a 25-count ground, but I'm happy with the result.  I do love the Teak.  It's my new favorite Caron color.  My photo doesn't do it justice.   I also dug into my stash and found some #12 perle cotton in ecru for the decorative stitches on both bookmarks.  It doesn't compete for attention the way a variegated fiber would--just my opinion.
So, two bookmarks completed from start to finish in one week!  The fact that they're prefinished saves a lot of time--no blanket stitch to do around the edge.  OK, Nordic Needle, where's the March bookmark?
Posted by Southpaw Stitcher at 12:05 PM 3 comments:

Celebration of a Life

Our Beulah was at the vet clinic last week to get a second treatment for her chronic kidney disease.  Unfortunately, this one was not successful, and she is no longer with us.  But I don't want to dwell on the sad.  Beulah was a mellow, smart, fun-loving girl, and I'd like to tell you a little about her.

Our local basset rescue organization took her in during July of 2003.  There was very little information about her life before she was rescued, but I've always wondered how her original family could have given her up or, if she was lost, not have moved heaven and earth to try to find her. 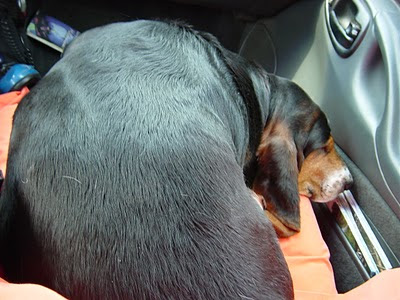 Here she was on the day we adopted her, riding in our car, on her way to her new home.  She had just turned 5 years old, and was (ahem) a little overweight.  DH said she had a butt the size of Arkansas.  She was a whopping 76 pounds in this photo. Her ideal weight was between 50-53.  If she was nervous about riding almost 200 miles with strangers to go to a strange new place, she didn't show it. 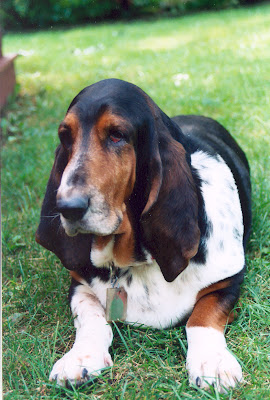 Enjoying the mild weather in the backyard, my plan of diet and exercise (for her, not me) was already beginning to get results.  She may have thought the regimen was somewhat draconian, but it was for her own good, as I repeatedly told her. 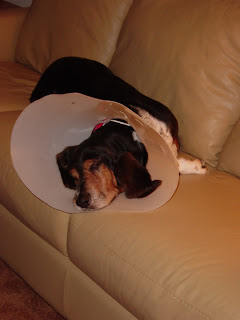 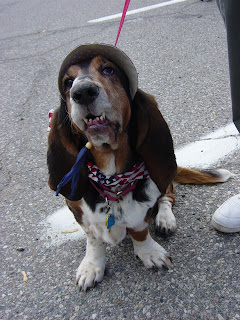 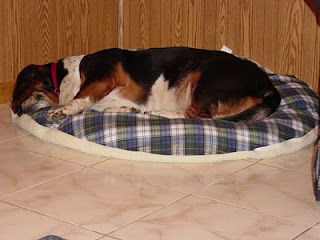 ..but was always able to kick back and relax.
Beulah Factoids:
She enjoyed flipping her squeaky toys up in the air before she "went in for the kill."
She would do a "happy hop" whenever one of us came in the door.
She loved nothing better than a good roll in the grass.
The only thing that ever made her go ballistic was the mail carrier (any mail carrier).
She would go up to you and shake your hand (repeatedly) in a effort to get something to snack on.
Her favorite snack in the whole world appeared here in Northern Illinois in June of 2007 (millions of cicadas).

She really just about lost her mind when they appeared.  If left to her own devices, she would have eaten every single one on our property (and there were hundreds, if not thousands). ﻿ 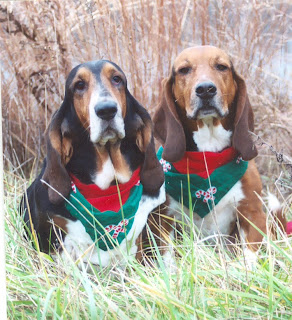 For the first six years that she lived with us, Beulah was one-half of a brace of bassets.  Beulah, of course, is on the left, and Timmy, our other basset, is on the right in this photo.  They were about as different as two dogs can be:  Timmy, the neurotic, easily-bored, super-athletic, separation-anxiety-afflicted nut case, and Beulah, the mellow, submissive, playful goofball.

Usually, Timmy's exploits garnered him most of our attention (usually horrified), but one time in particular, Beulah was the recipient of all the "oh no you didn'ts."  We had come back from a shopping trip to find an empty container of pancake mix in the family room.  The reason that this was a little out of the ordinary was because the container had been put away in an upper kitchen cabinet, which meant that Timmy had jumped onto the counter, opened the cabinet door, taken the container down to the family room and opened it.  He was polite enough to close the cabinet door behind him.  And, yes, he was the only dog I've ever known who could jump up on the kitchen counter--all four paws.  His legs were a bit longer than most bassets.  Folks, this is a true story!  So, I was in the middle of asking Timmy what he had been thinking with the pancake mix, when DH says, "You'd better take a look at Beulah."  She had been quite interested in the pancake mix which had, by that time, been turned into batter by her saliva!  It was all over her face, ears and dewlaps.   And you know I got a photo: 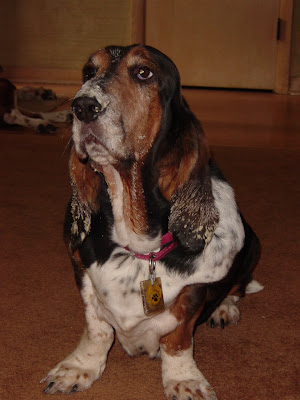 This gave new meaning to the term "pancake make-up."   (sorry)   If you check out the background of the photo, you'll notice Timmy's legs.  He's stretched out in our front hall without a care in the world.
Lots of folks will think that Beulah was lucky that we found her back in 2003, but we know that we are the lucky ones.
Thanks for visiting, and letting me reminisce about our old girl.
﻿
Posted by Southpaw Stitcher at 7:49 PM 5 comments:

Email ThisBlogThis!Share to TwitterShare to FacebookShare to Pinterest
Labels: Beulah

I recently entered a giveaway for a totally cool fat quarter of hand-dyed fabric and guess what?!!  I won!!  What, you say you figured that out from the title of this post?   oh...   Anyway, the fabric was stamped in pink with the end of a bok choy (which looks just like a rose, by the way!) and in green with the end of a zucchini.  I kid you not. 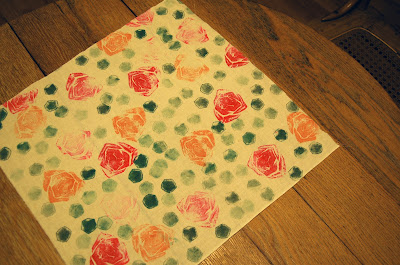 The colors are off in my photo, and I couldn't even get Photoshop to fix it.  The dark roses are a hot pink and the lighter ones are a lovely coral. 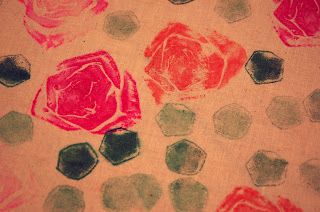 The colors are somewhat truer here, but I have an even better idea.  Just mosey on over to Moonsilk Stitches and you can see a whole slew of excellent photos, as well as the entire process used to create this masterpiece.  I just love how the lady behind Moonsilk Stitches always thinks outside the box!

Thank you so much for my wonderful prize!

There's nothing like cold, snowy weather to encourage a gal to stay inside and stitch (if you're me).  So here is the finished product, Rainforest Crunch by Needle Delights Originals: 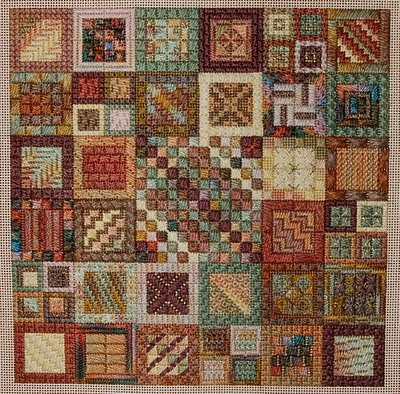 I did take one or two liberties with changing the stitch (and color) here and there but, for the most part, followed the recommended colors and chart.  I'm quite happy with how it turned out. 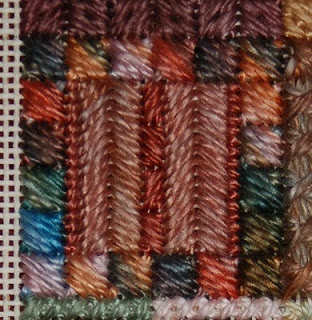 The color name for the border of this square is "Rainforest."  It was used sparingly in the design, since the colors are so strong. 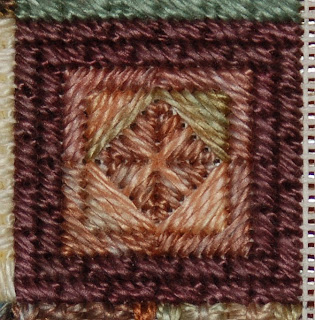 This is another of my favorite squares. 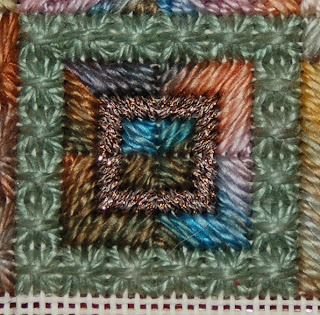 I love how this close-up features a dog hair (since removed). 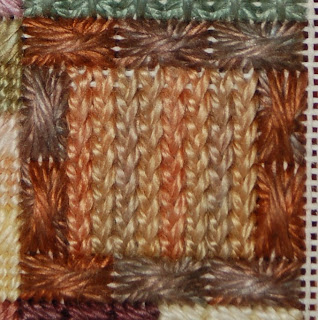 I used the Van Dyke stitch on the inside of this sqare instead of the recommended stitch.
Sometimes I can't resist changing it up.
I think I will actually miss working on this piece because I had so much fun with it.  It got me through the worst of the Winter of '11--hopefully the worst, anyway.
Now, I have a request for you all.  Please say a little prayer for my sweetie-pie, Beulah. 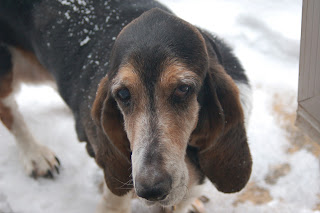 She stopped eating and drinking over the weekend.  This is not unexpected when you have a dog with chronic kidney disease.  She is now at the vet's being hydrated and "flushed out."  She did the same thing in January of 2010, got the treatment and, to everyone's amazement, had a good 13 more months.  We are hoping for a second miracle.
Thanks for visiting.  I love reading all of your comments.
Posted by Southpaw Stitcher at 12:19 PM 8 comments:

Happy Ground Hog's Day to you all.  Our little corner of Northern Illinois got its fair share of the blizzard which is moving across the country.  Although we do have a snow thrower, Beulah has decided that she wants to help us with the snow removal. 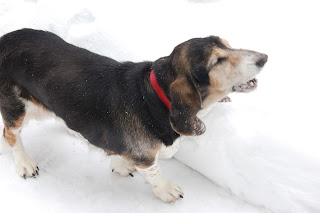 There she is, eating her way along the pathway to the backyard.  Yes, I know she does not have her coat on.  In her haste to obtain the tasty treat she ran out without it.  Her recent outings have averaged about 60 seconds each, including snow eating. 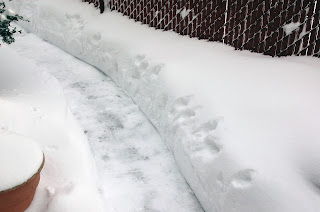 You can see where she has chomped her way down the path.  We will probably be getting a bill for her services at the end of the month.

With all this snow, there has been quite a bit of stitching going on.  Below is the progress I've made with Rainforest Crunch. 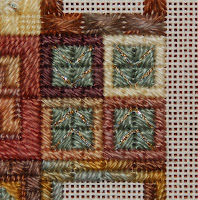 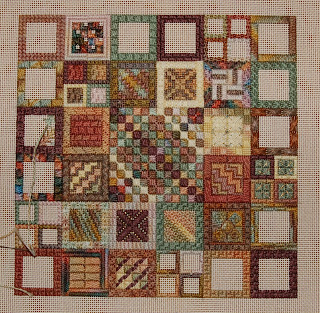 I may be inside stitching for quite a while longer.  DH's snow thrower won't start!!

If you're one of the millions affected by this storm, stay safe and dry.  If you're in a warm and sunny clime, send me a real estate brochure!
Posted by Southpaw Stitcher at 2:07 PM 6 comments: