Hey Blog Buddies,
I went to a knitting class today, although I have known how to knit... let's just say for many decades.  I learned to knit when I was about 18, knitted a lot for about 15 years, then moved on to crochet.  I know many very nice people who knit, and when they have asked me if I knit, I usually sniff "I know how to knit, but I crochet now."  Why they still speak to me is anyone's guess.  Recently, I received an email from Loopy Yarns (maybe they're called that because they're located in the Loop?--I haven't asked).  They're featuring mitten classes in February--both knitted and crocheted.  I've done crocheted mittens (I threw them out because they weren't very warm), but knitting a mitten on four needles is something I tried long ago and failed at.  I thought that maybe if I could learn "the right way" I'd be more successful.  This is what I got done in class: 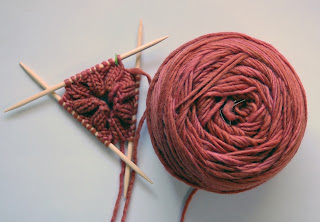 Yes, like the title of the post says:  crazy!
The yarn is Malabrigo Merino Worsted--very nice.
The shop wound it into a ball for me.
I have to admit that my usual yarn purchase is a pull skein
from Joann's--this is quite upscale for me.
I kept muttering to myself in class,
"This is insane!  Crochet is so simple--
one hook and one loop..."

But I kept at it.
Our teacher Denise is very nice
and I've learned a lot already,
including a better way to cast on.

So, am I going back to the Dark Side?
Nah.  But I hope to finish at least one mitten
by the time the class is over.
Maybe I can just put my other hand in my pocket!

We have two more class sessions.
Wish me luck!

Hope you're having a great weekend.
Thanks for visiting!
Posted by Southpaw Stitcher at 6:46 PM

Well done! I love to learn new things and just like you I've done it a long time ago... Need to learn again! :p
Love the color of your yarn :)
Keep it up!!! :D
Hugs&smiles!

Good luck with finishing both of your mittens! I used to knit a bit, but found it too hard on my hands/wrists (now that makes me feel old! lol).

You go Pat! This is going to be a beautiful pair of mittens!

You know, it is okay to do both. My knitting project and my crochet project live happily together in the same tote. I've heard Loopy yarns is a great shop. And your mitten start looks lovely--I've never seen a "finger up" mitten pattern (they've always begun at the cuff). Very cool.

The yarn that you chose is so pretty and luxurious!! I would need to have a class on knitting too since I don't know how to follow a pattern! Have fun with the class!

I bet knitted mits are awesome!