Today I'm joining in the celebration of our friend Jo's birthday:  the big Five-Oh.  Jo's blog, in case you don't know, is Serendipitous Stitching.  She has assigned each of the 50 blog hop participants a different year, picked from the last 50 of course, and my year is...

Here's what happened to Jo then:

Jo was 40.  Life Begins!  Jo and her new partner continued to work together and bought a house together too.  Jo celebrated her 40th Birthday with a big party at their music venue and even got dragged on stage by her cousins to sing a song with the band.  Actually the cousins sang and Jo played tambourine!  Jo's son (not yet known as The Large Boy because he was only little) started Nursery at the local Primary School and Jo joined the PTA helping run the raffle at the Christmas Fayre.

In 2003, the company that I worked for had moved from their nice commuter-friendly location in downtown Chicago to Warrenville, which meant a nightmare 43-mile (one-way) commute for me, peppered with construction delays for the entire time that I stuck it out there.  To make matters worse, office politics was making my job unpleasant, to say the least.  I was working a 9-hour day, and had to leave for work at 5:20 in the morning and didn't get home until about 12 hours later.  Needless to say, there was not too much stitching, reading, or anything else happening on a weekday evening except watching mindless TV and going to bed early.  I had already decided that I was going to take early retirement in March 2007, so when Jo told me that 2006 was my year, at first all I could think of was that it was just one big countdown to the following year.

But, it wasn't all bad.  The daughter of a good friend got married in Seattle that year, so we got to visit Washington state for the first time, and do a little sightseeing, too. 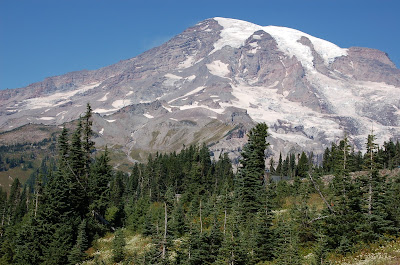 And the happy couple just celebrated their tenth wedding anniversary!

I started taking Spanish classes on Saturday mornings,
and the instructor was fun and engaging.

I did manage to do a little stitching in 2006
(otherwise I would have gone totally insane),
and this tiny guy on 40-count mesh was completed. 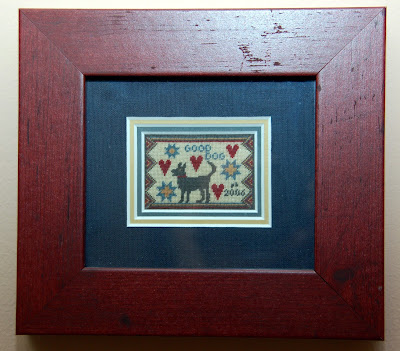 And speaking of dogs, we had two at the time... 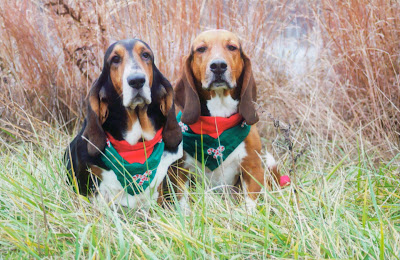 Beulah and Timmy, a couple of cutie-pies.

Lastly, Jo asked the Blog Hop participants
to post a photo of something that we've stitched
that we think she would like. 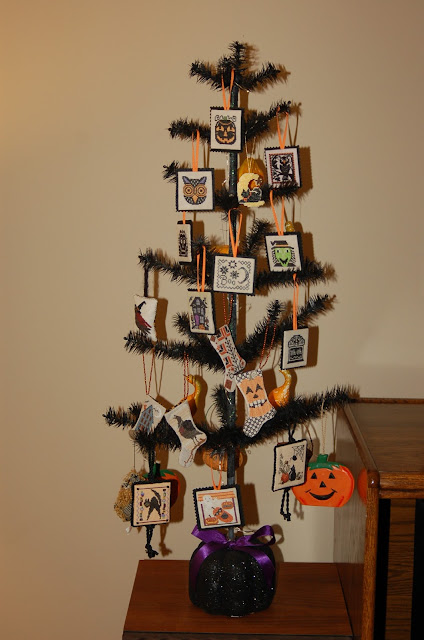 I know she's fond of Halloween,
so here is my tree full of spooky ornaments.

Happy birthday and feliz cumpleanos, Jo!
Posted by Southpaw Stitcher at 6:22 AM

Jo who can't think of a clever nickname said...

Thanks for taking part in the Birthday Blog Hop. Sounds like it was a tough year for you but at least there was light at the end of the tunnel with the imminent retirement!
I didn't mind my commute but I could stitch as it was by train.
I love your Hallowe'en tree, perfect for me. But then I'd have to ornify some of my finishes instead of sticking them in the scrapbook the quick and easy way!

Great post and I'm glad to have found your blog. Jo is going to love that ornament tree.

That is a fantastic ornament tree! I will eventually stitch enough of something to make a tree, maybe. Your good dog piece is cute too, but 40ct mesh! Nope, lol!

Super post to help Jo celebrate her big birthday, I enjoyed reading it and seeing your 40ct stitching.

I dream of retirement!! :o)
I love your Halloween tree!
Hugs xx

That is the perfect tree!!!

Love hearing everyone's stories! It is fun to learn a little about all the people I follow.

I'm hopping by on the blog hop. What a great post. Thanks for sharing. Love your stitching pics. The 40ct mesh is beautiful. Just LOVE that Halloween tree.

What a fun post! And your ornaments on your Halloween tree are just wonderful--love looking at each and every one :)

Love your Halloween tree and so nice to see the bassets!

Still on the road for Jo's Big Birthday BH, love the dogs pic and your tree must be a great decoration in the house for Halloween. Amicalement.

I am slowly hopping through the birthday blog posts. I enjoyed reading your very interesting post. This is such a nice thing to be involved in.